Home / Blog / People / Hanami, that is to say, how the Japanese totally loose it for the cherry blossoms

Hanami, that is to say, how the Japanese totally loose it for the cherry blossoms

It happens in the spring, when the most popular and the most flower-abundant, cherry species, begins its flowering.

The Japanese go to parks and gardens “en masse”, in order to contemplate the phenomenon in a celebratory manner. Often, under trees richly covered with flowers, large groups of enchanted admirers gather, taking pictures of themselves with the cherry blossoms in the background. A picnic is a traditional form of celebration. Blankets are distributed under the blossoming trees, people bring food and spend time talking, singing or napping. A beautiful tradition isn’t it? 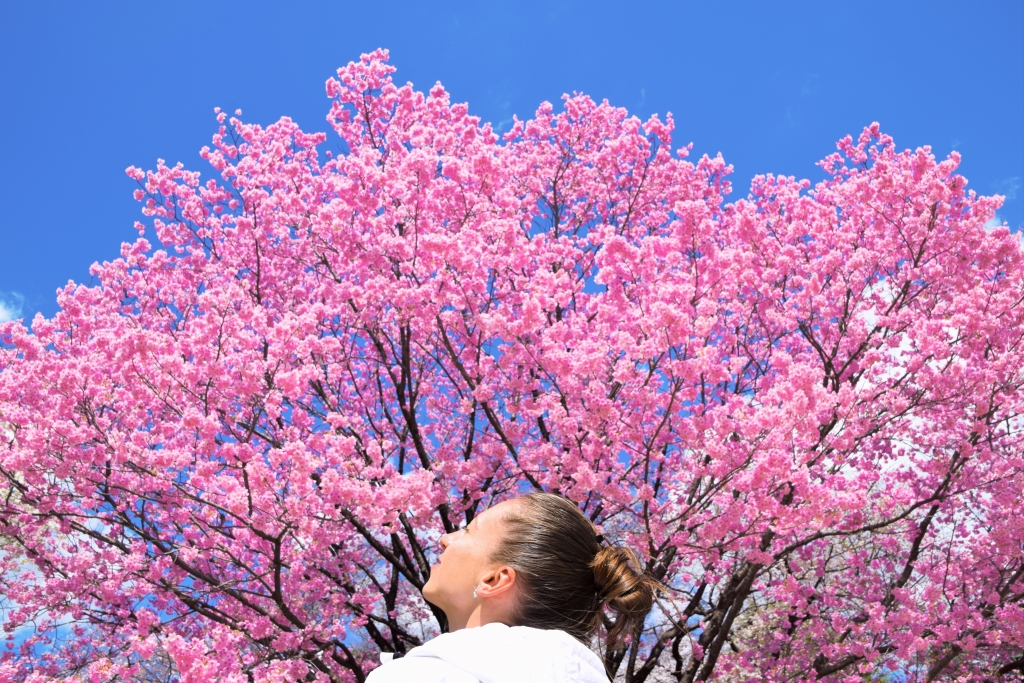 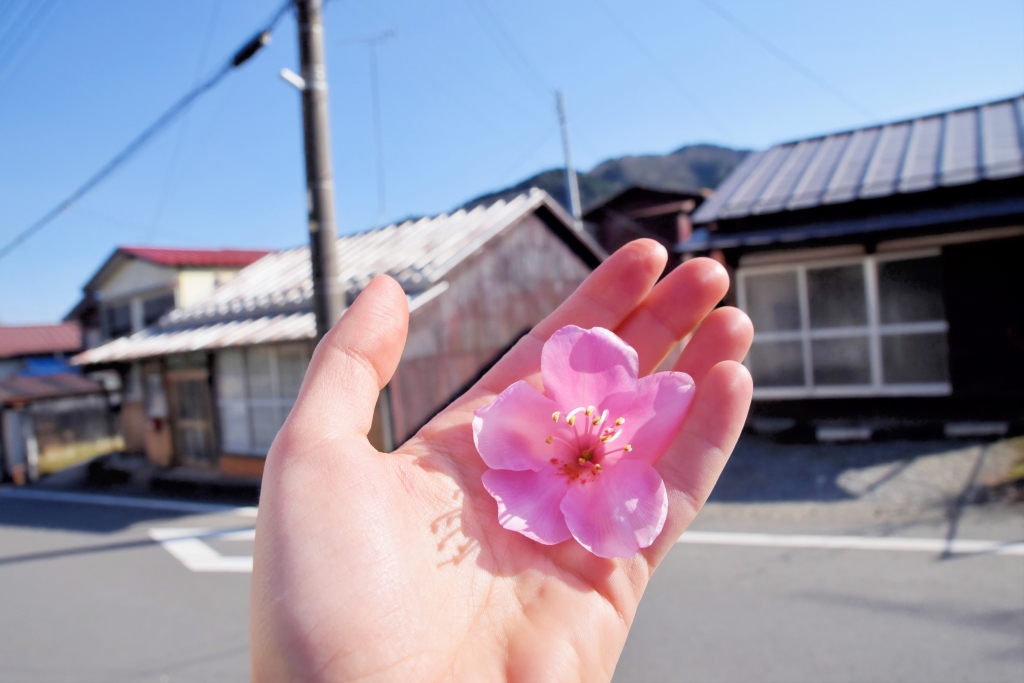 Sakura – it’s the cherry blossoms, but what it really means for the Japanese?

Hanami (” flower viewing ” in Japanese) is a Japanese tradition of admiring the beauty of cherry flowers blooming. Celebrating the flowering of these trees has a long tradition in Japan. As early as in the eighth century AD in the historical period of Nara, blossoming plum trees Ume, were already solemnly admired. Later, in the Heian period (794 – 1185), the term Hanami became part of the Japanese vocabulary, used for the first time, in the historical Japanese epos ” The Tale of Genji ”. At the time, it referred not only to the admiration of cherry blossoms but also to wisteria and other flowering plants. In time, it got connected only with cherry blossoms. Initially, the tradition of flower viewing and celebrating it under the blooming trees was reserved only for the royal court. Later it was taken over by the samurai social layer, and in the Edo period, it spread out to society as a whole. In the 18th century, many public parks were created, and cherry trees were planted in them, encouraging people to celebrate. Many beautiful hybrids were then created, yielding larger and more magnificent trees, with more flowers on each branch. Nowadays, the cherry blossom is still greeted with enthusiasm, but also with nostalgia. The short flowering period was for the Japanese, always a metaphor of the fleeting character of life: passing away, but also the renewal of life, cycles, hopes, and fears. Each time I watched the blooming cherry trees, I was filled with the feeling of euphoria and general happiness around me. Everyone who gathered around the trees, was happy, smiling or thoughtful. It was very easy to forget problems and boring duties, of everyday life, as they were left, somewhere far beyond the park’s fence.

Cherry trees are widespread throughout East Asia, in countries like China, Korea, and Japan, but only in Japan, these trees and their flowers, are loved in a special way. 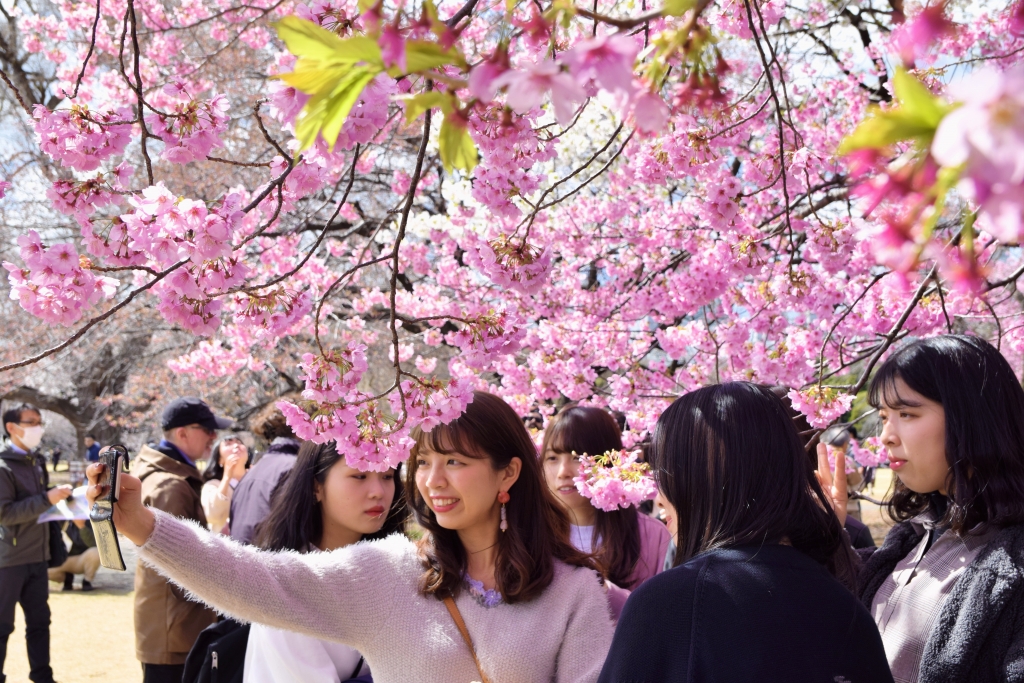 While travelling in the Japanese countryside, during this special time for this country, I discovered that the cherry blossom is here a mass phenomenon. Forget about the crowded parks full of tourists, where often getting close to a flowered branch is almost a miracle. The Japanese suburbs, villages and mountain slopes, are full of these beautiful trees. There are endless possibilities. From the beginning of February in Okinawa, through March and April in Honshu, until May in Hokkaido, you can find pink spots along the green landscape of these mountain islands, around every corner. Every year, the official Japan meteorology station, announces the Cherry blossoms forecast, for the whole country, at different latitudes. Each year, the timing is a little different, due to the temperature conditions. Within just one spring week, when the temperature rises, the cherry tree buds bloom. Among the cool spring days, it waits patiently for a moment of warmth. Anyway, staying in Japan around March and April, it’s guaranteed that somewhere, in some region, the Cherry blossoms are to appear. The ease of traveling by train in Japan, makes it easy to travel where needed. However, if your planning failed and you were not able to see the maximum flowering moment, do not worry! When the Cherry Blossoms fade away, is even more beautiful! Delicate petals of flowers, struck by gusts of wind, flow away in waves, giving the impression of snowing, and carpets of flowers on the ground will make your path, wherever it leads, most unique. 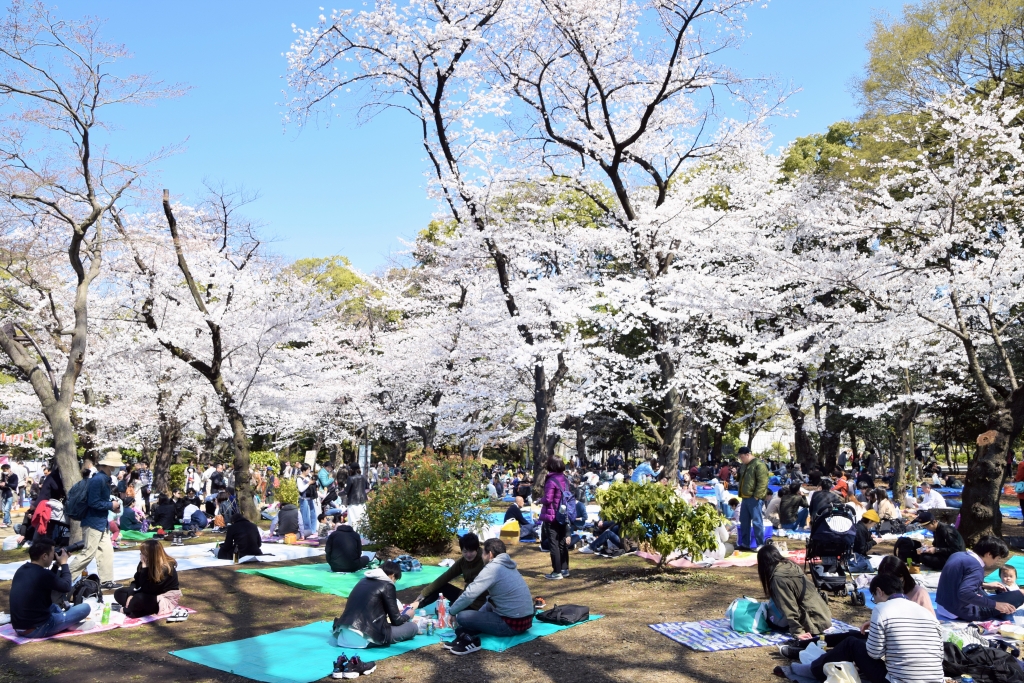 5 places where I watched the cherry blossoms

It’s the first on my list because it is the most spectacular. The park boasts 65 types of cherry tree, for a total amount of 1,300 units, on almost 60 hectares of land. A characteristic feature of this unique park is that each cherry variety, blooms at a different time; in the spring, summer and fall, and even twice a year. This means that, at any time of the year, you can see there the blooming cherry trees. The park is full of other treasures; magnolia, wisteria, azalea and cypress trees, all of it in the scenery of a typical Japanese garden, sprinkled with ponds and green alleys surrounded, by the tall buildings, of the popular district of Shinjuku in Tokyo. 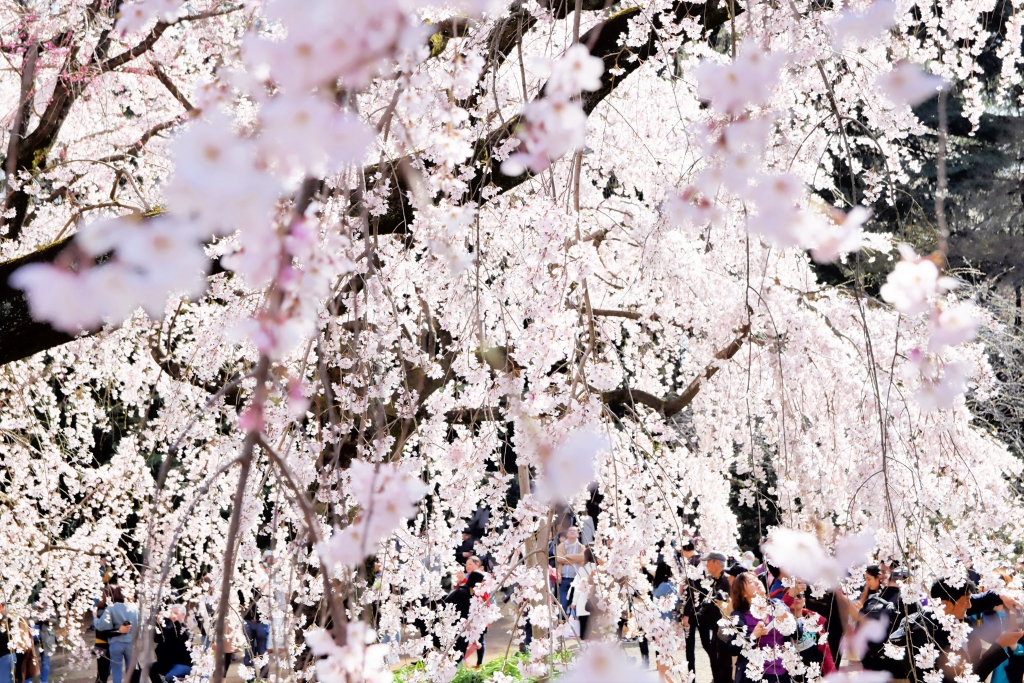 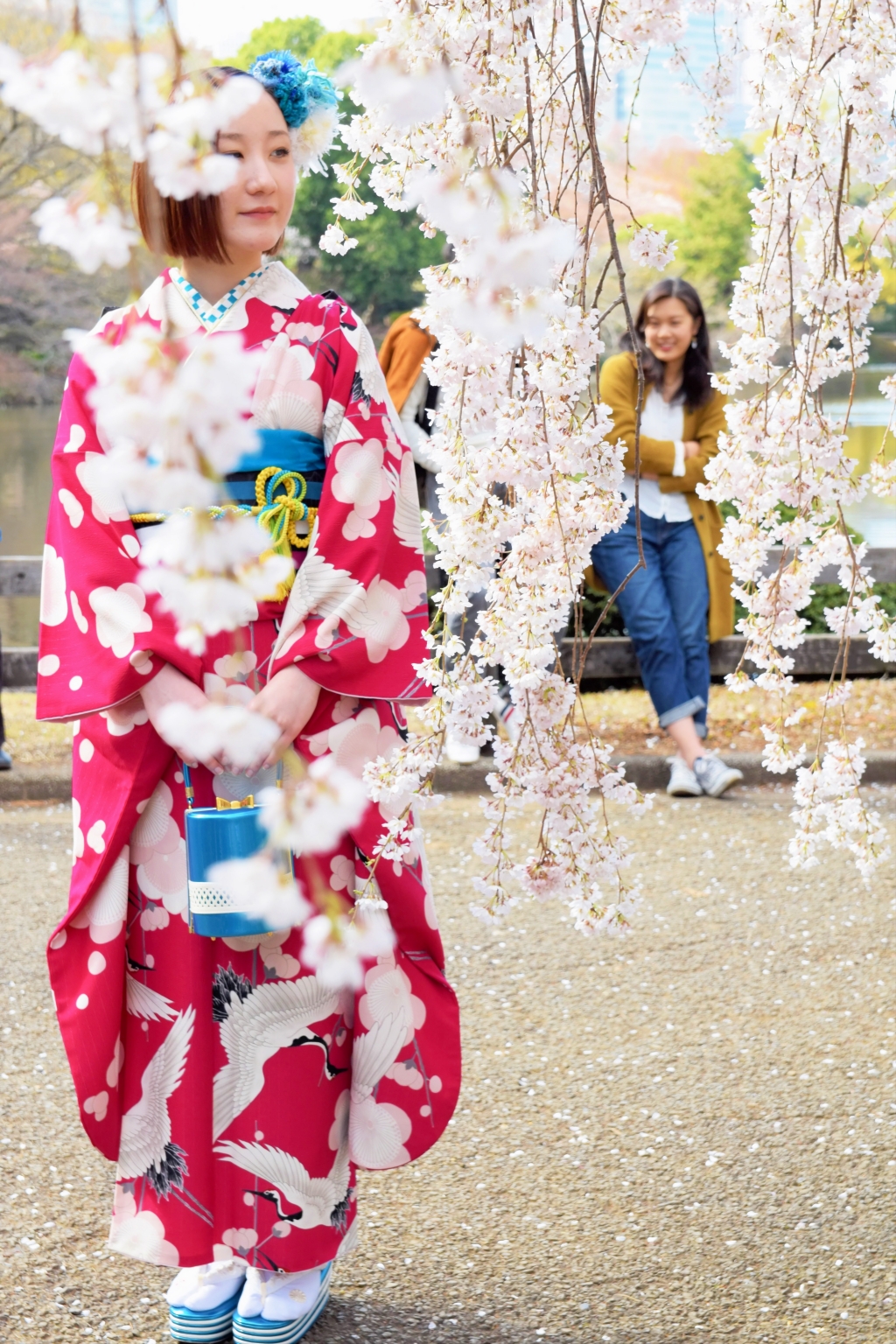 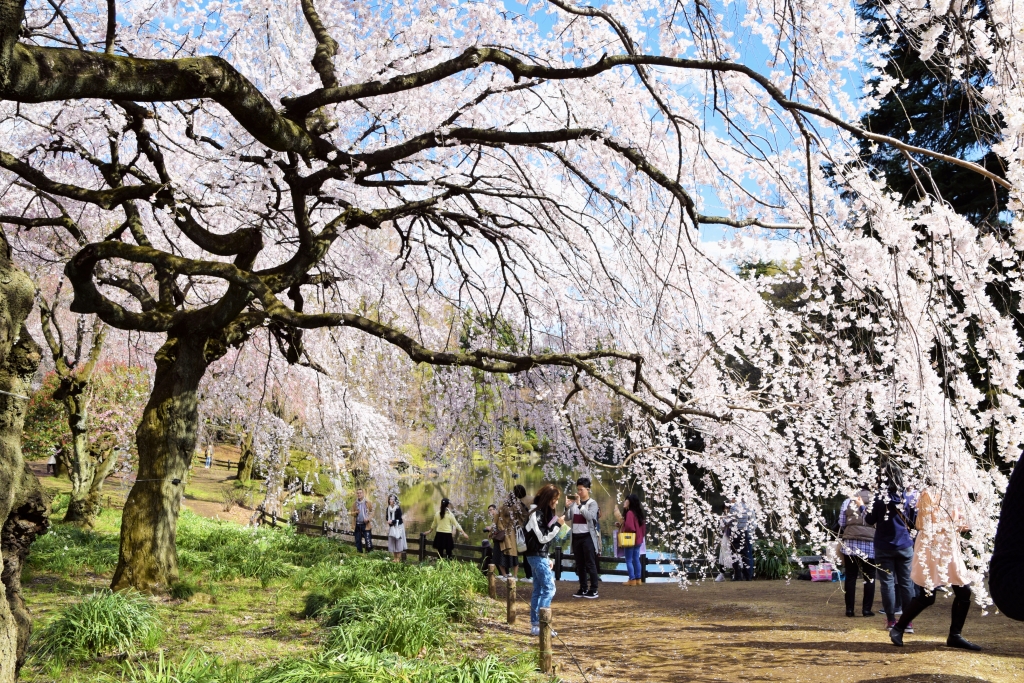 The mountain is beautiful, but only ambitious mountain walkers will reach its peak. It is a whole day trip, where the journey from the railway station to the top, will take you about 3 hours on foot. There is also the possibility of taking a bus, to the strategic points, but it is often crowded and bus stops full of queues, make it rather an ordeal. Due to the popularity of this place, it is best to go there on a weekday and early in the morning. The route is full of individual cherry trees, which gather up gradually uphill, where you can see mountain tops, covered with pink terraces. The cherry trail ends in the viewpoint of Hanayagura, where the view of a sea of ​​mountains and valleys, flooded with cherry blossoms, goes as far as the eye can see. 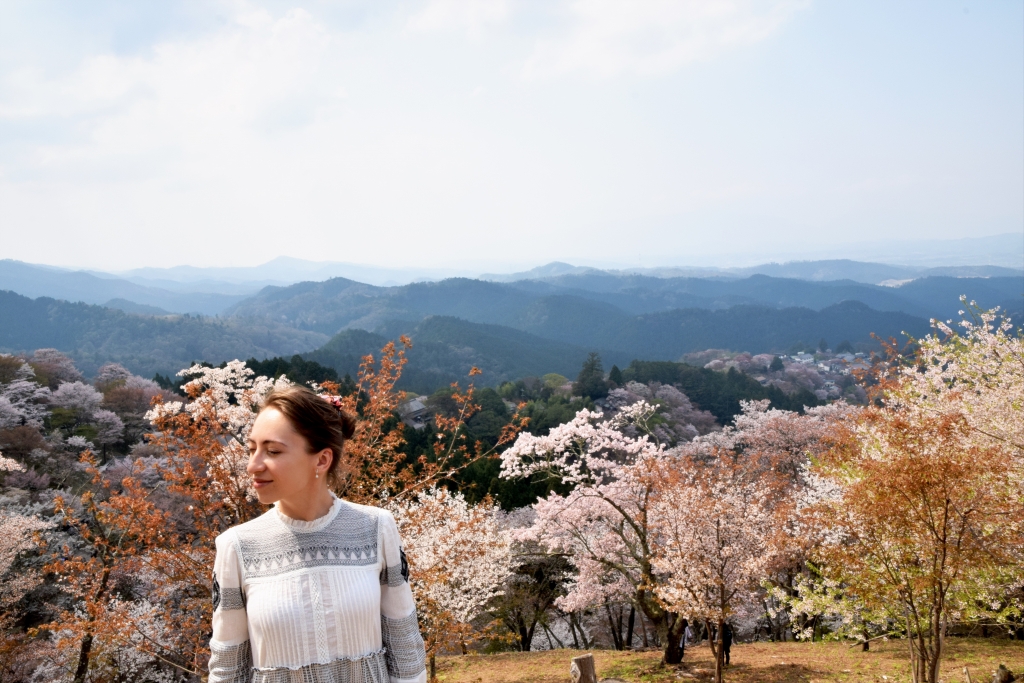 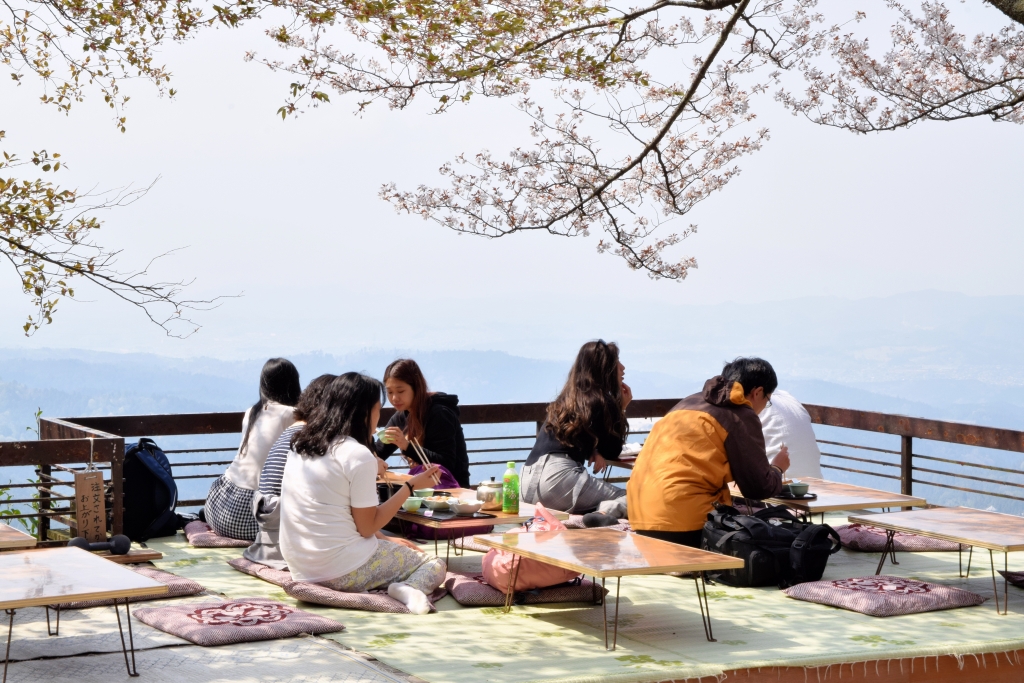 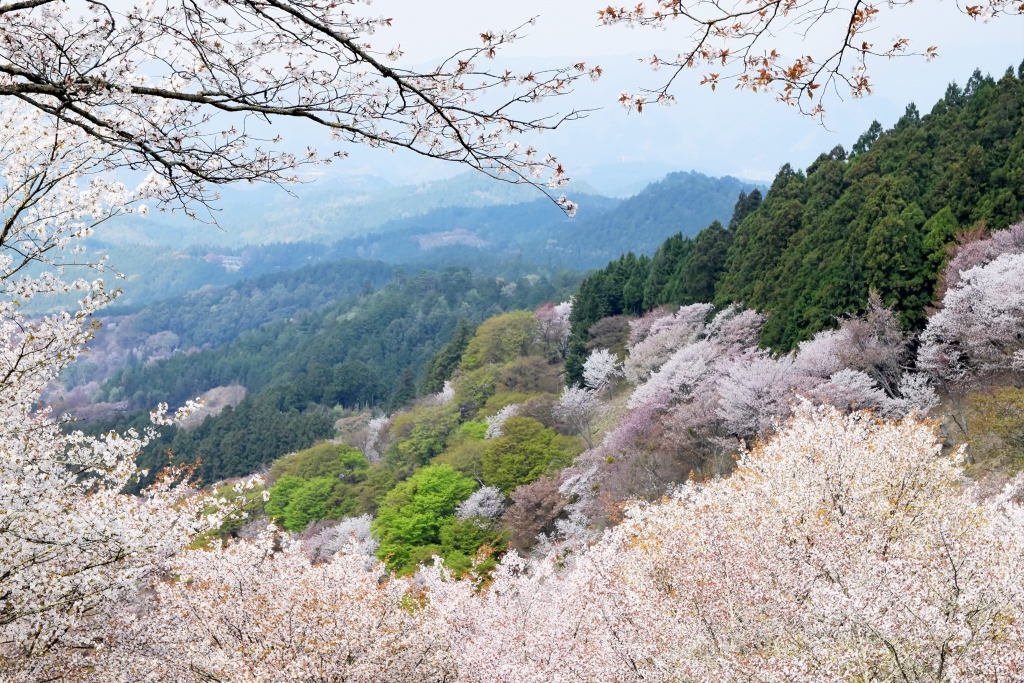 While crowds of tourists push through the alleys of the huge Nara Park, feeding deer and visiting historic temples, just go away a little bit from the popular tourist routes, and the atmosphere will change radically. Doing so you will find yourself in the more quiet and peaceful corners of the park. At the very edge of it, the huge mountain of Wasakusa begins. The entrance is not without a small fee, and you will have to climb a lot of wooden steps, in order to reach the top of it. The views from above, spread over the entire city of Nara, and on the forest slopes of a nearby mountain range, where the mountain of Wasakusa is merely a modest representative of its greatness. The route to the top, is covered with Cherries and on nearby hills, you can spot many lonely cherry trees contrasting with the coniferous greenery around. 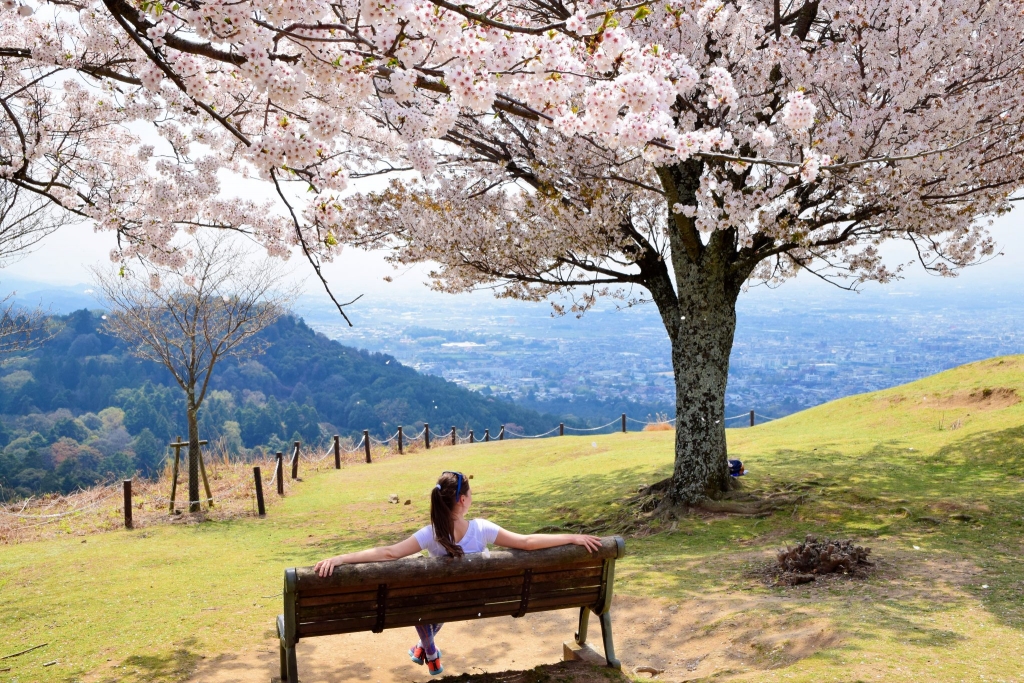 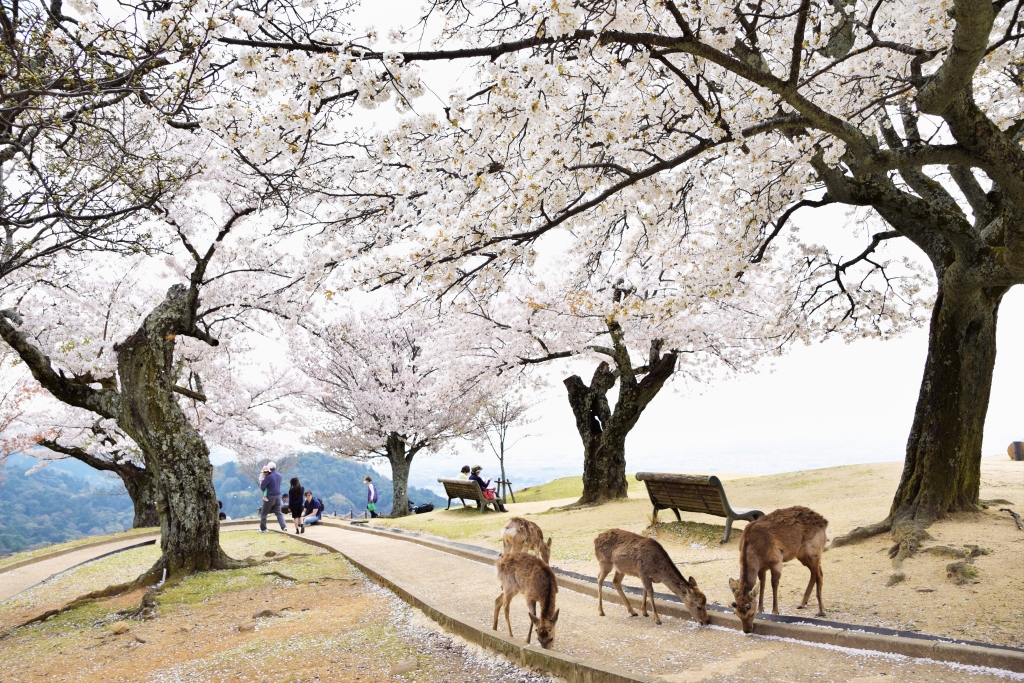 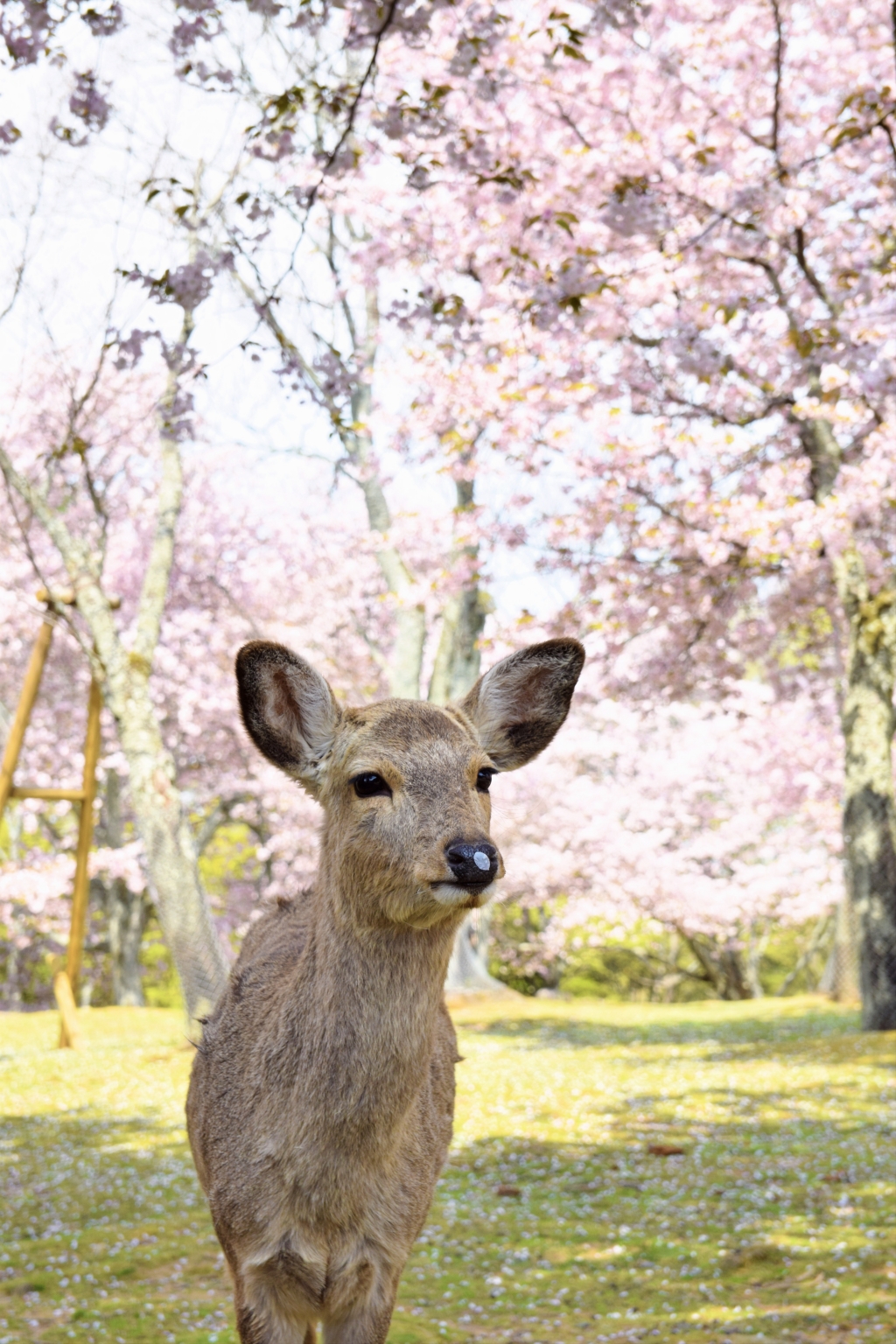 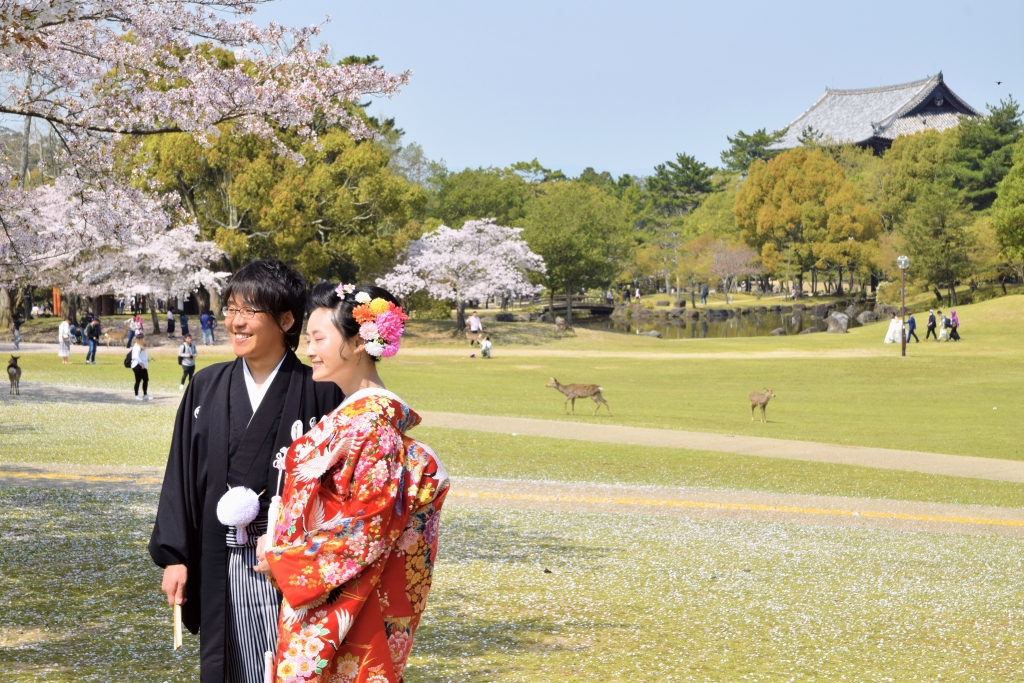 There are many opportunities to admire cherry trees in this centrally located park of Osaka. It is famous for its fairytale Edo castle, in the heart of it. Many viewpoints of the park, offer a different view of the castle and its fortress. The building, previously destroyed by different fires and bombings, is now perfectly reconstructed, including the surrounding elements: moat, access bridges, and gates. The scenery allows you to use your imagination, and go back to the old days of the Edo era, when the castle was in its heyday. Some elements of the ancient structure have survived to this day and can be admired during long walks among the streets of the former complex. 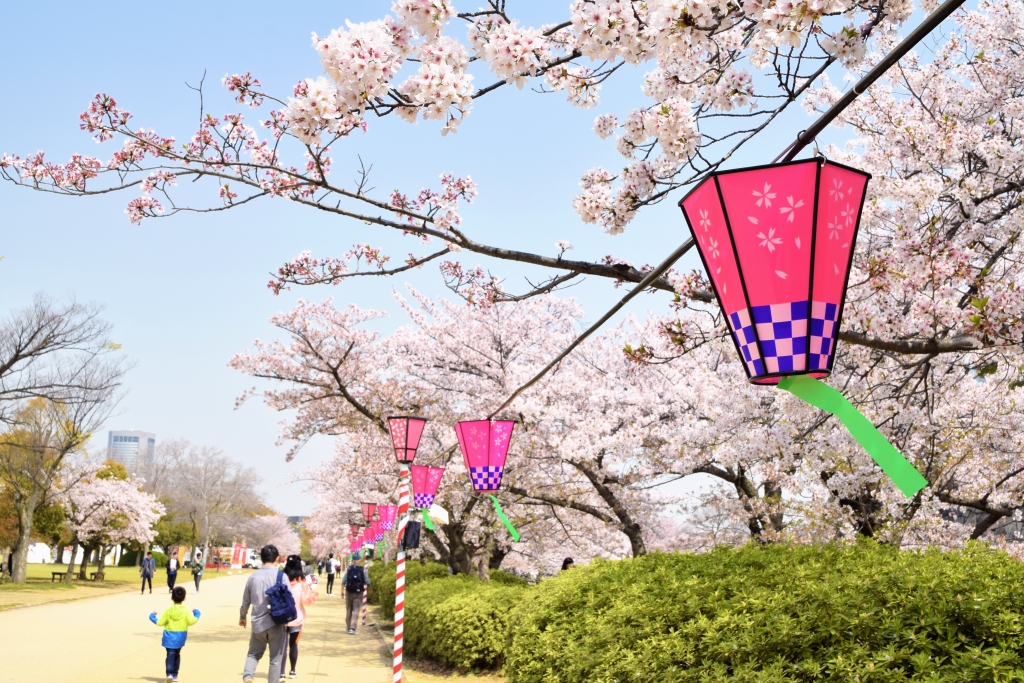 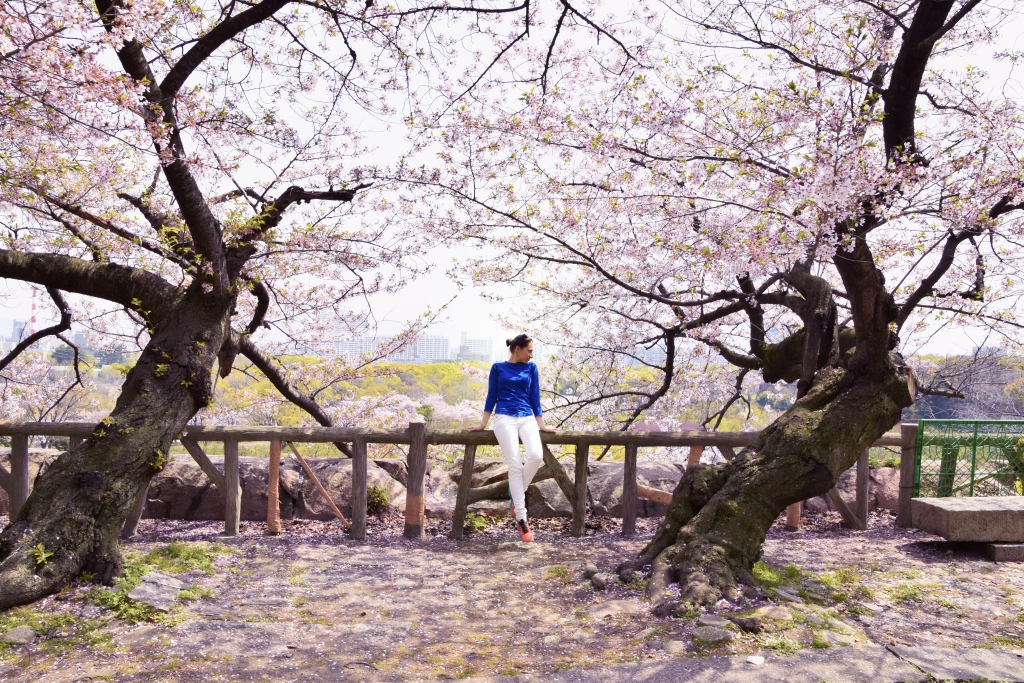 Nikko National Park with a mountain massif, crowned with the Nantai volcano, is an excellent place to wait for the blooming of the mountain varieties of the Cherry. Scattered in small quantities throughout the town, they lure you with a stronger color than their urban varieties. At the railway station, at the local temple or on the riverbank, cherry trees are the companion of every walk in this city, wherever we go. 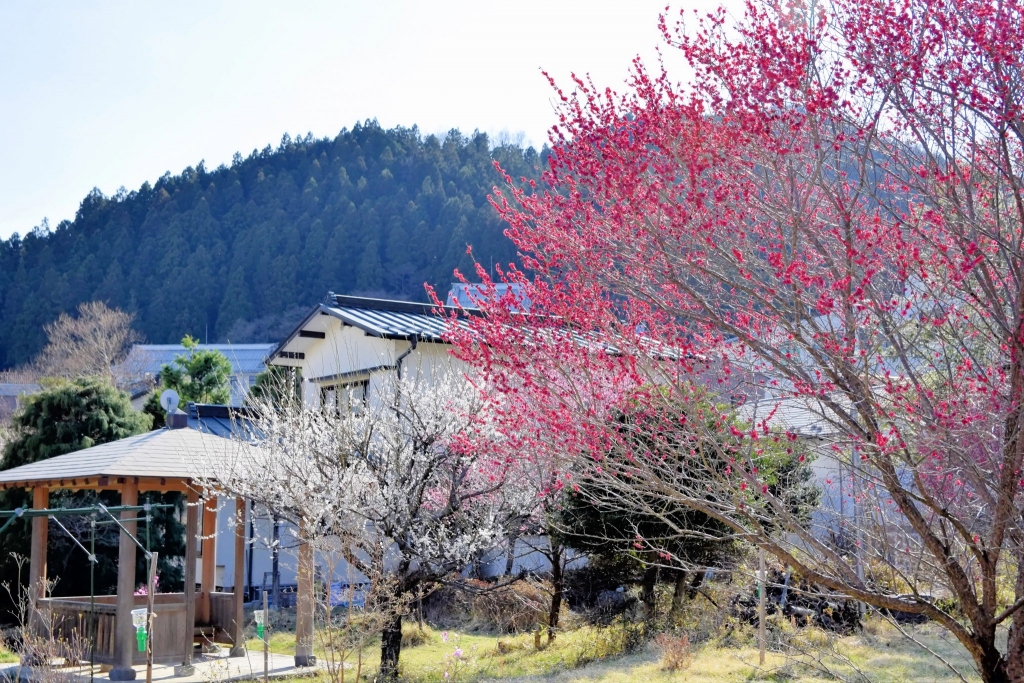 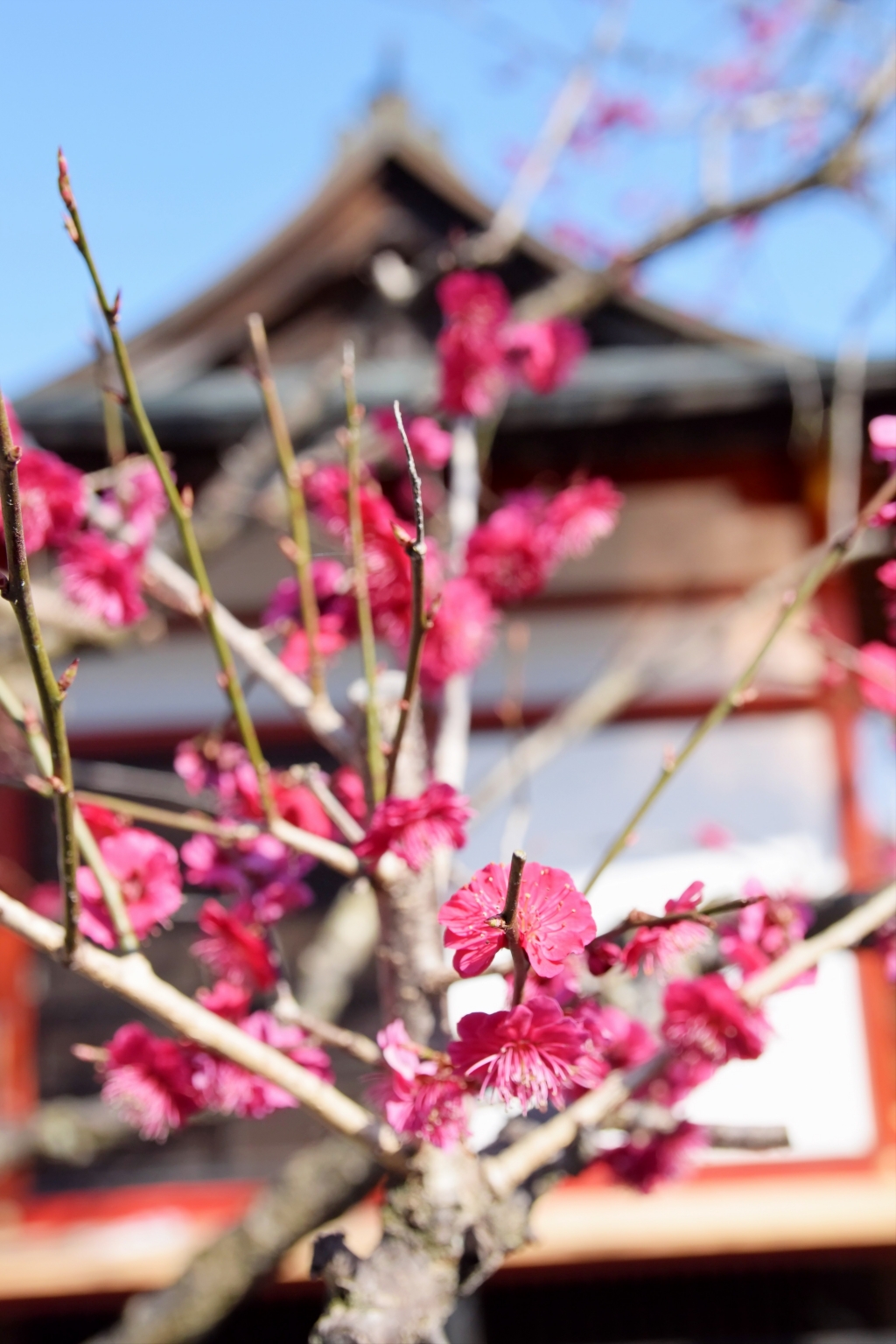 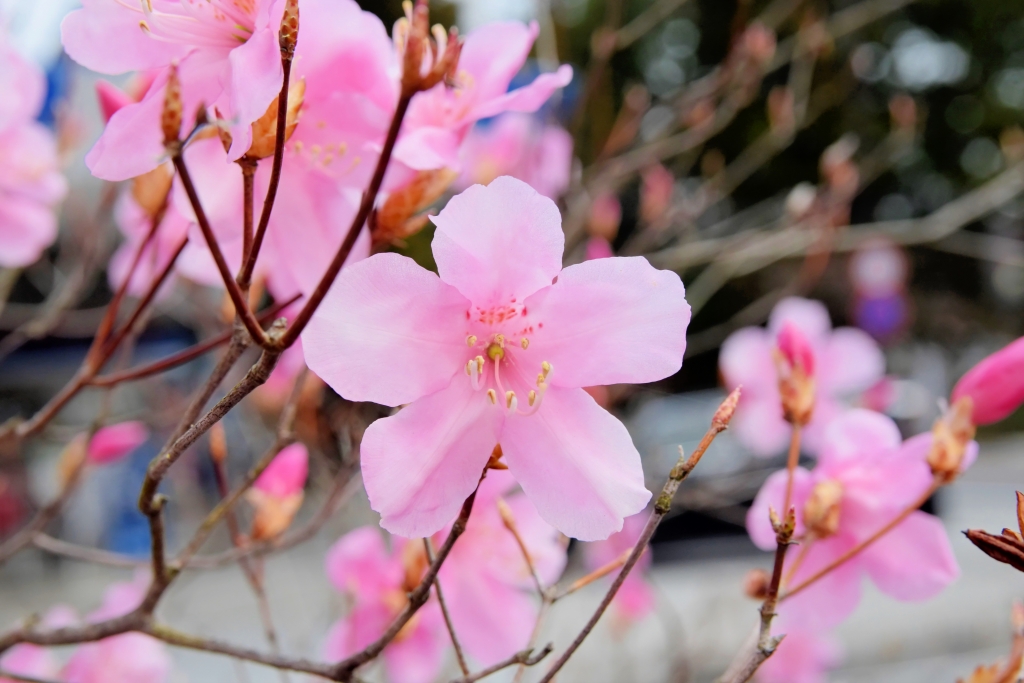