What color is China? – Red. Red, because it’s communist?

Although we often associate the red flag of communism, with the last bastions of the political system stemming from the USSR, the red color has been a special color for the Chinese for centuries. When traveling to China, the characteristic red lamp suspended separately or in groups, on trees and buildings, rushes into our eye. The red Chinese flag with five golden stars, flutters happily at every step. People like to dress in vibrant colors of red and often decorate their homes, with red cut-outs on window panes and with auspicious verses on the doorways, written in red Chinese letters. 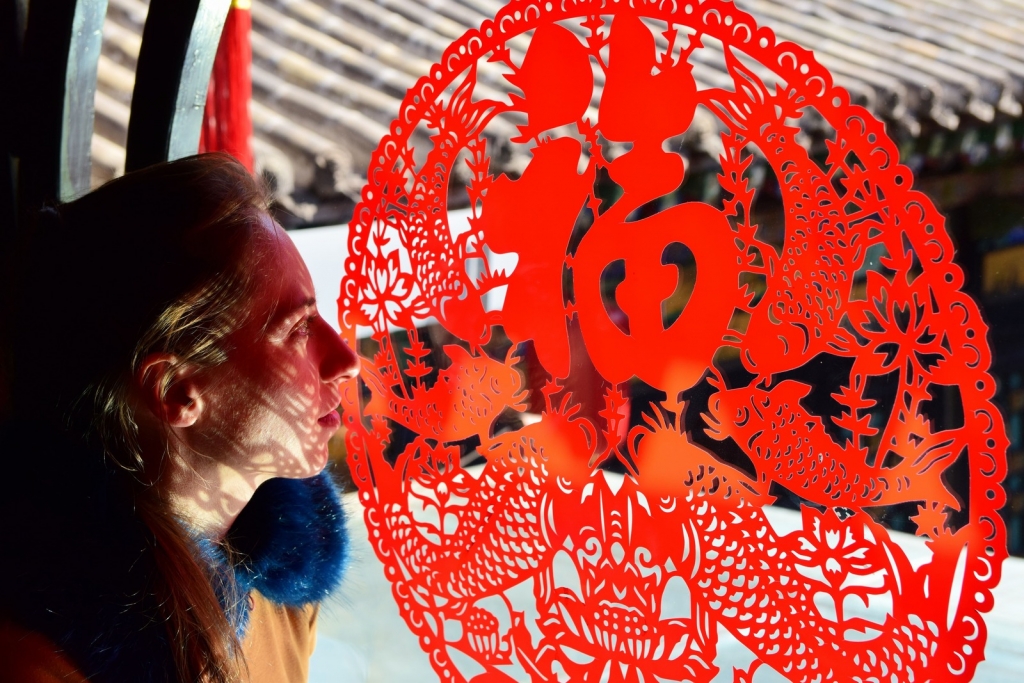 Accustomed to the subdued colors of the Western world, staying in Asia, feels like being in a magical land of colors all the time. Everything around is more vivid, and the people in their colorful attire, seem to be happier. However, I have found that the aesthetics of any given country may differ significantly from one another. Individual colors have a specific symbolism for different cultures, also for a single person, and their meaning may change over time. You can experience colorful dizziness in Thailand or India; however, in China, the choice of colors is stingier but no less striking.

There are five colors in common use here, and the ubiquitous red dominates over them all.

The significance of these five primary colors in China takes its origins in the ancient philosophical system of this country, the so-called five-element theory. According to this theory, our universe-all phenomena and processes of nature- are a manifestation of life energy: Qui. Qui manifests itself in the form of five elements. According to the principle of yin and yang (unity and variability of opposites), these elements are subject to a continuous cycle of destruction and regeneration. These cycles regulate nature and are the source of its variability. The five elements are: fire, water, wood, earth and metal, and each of them is assigned one side of the world, season, day of the week, emotion, part in the human body and in addition to many others – color. 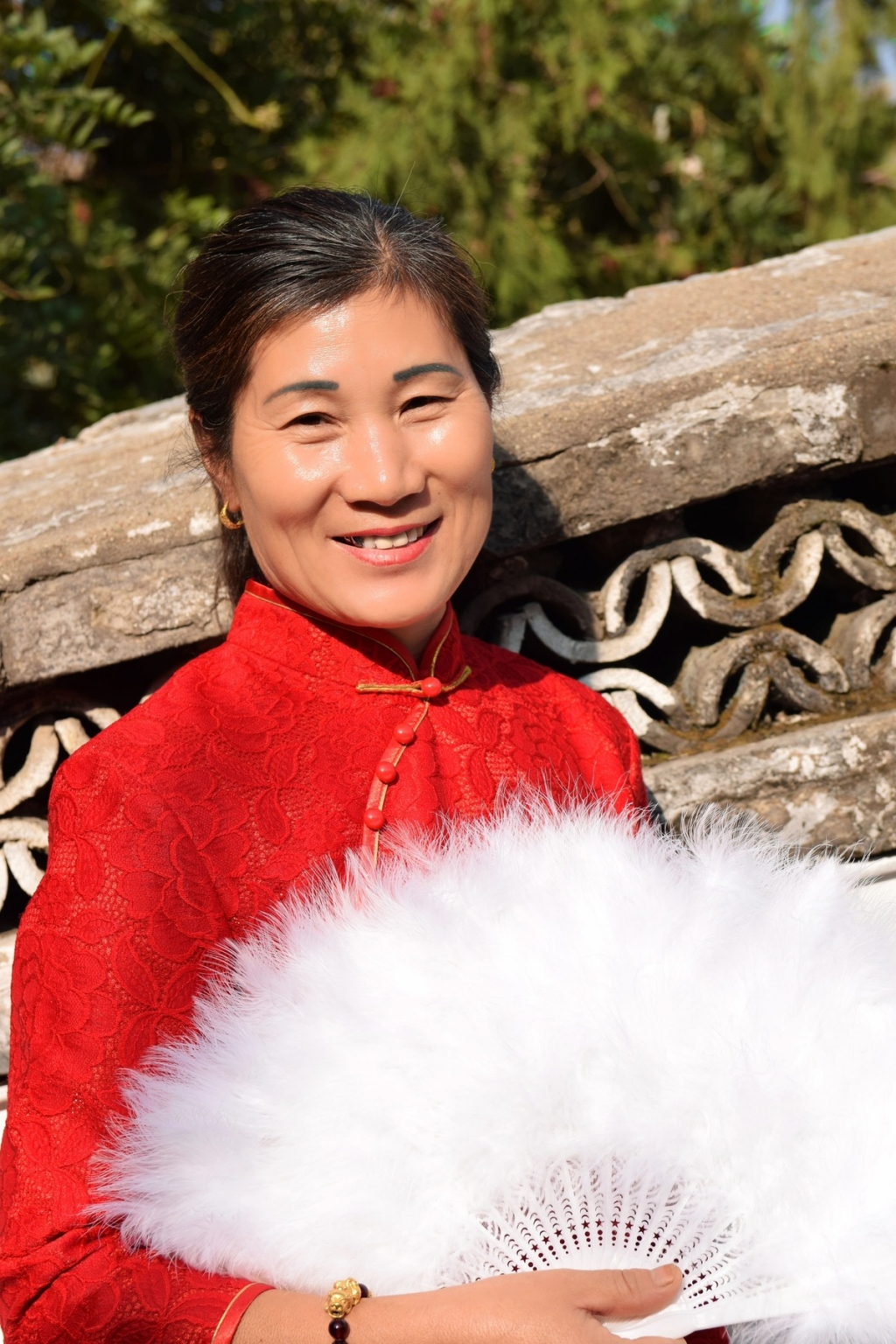 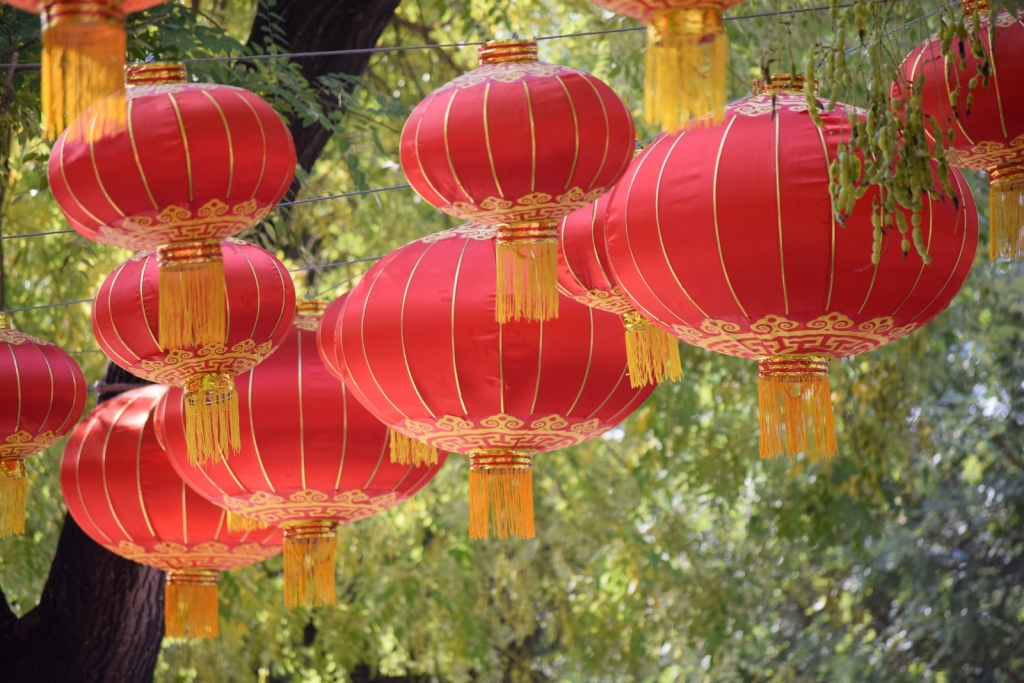 According to the Wu Xing system (the five elements theory), the black color assigned to the element of water is the color of the heavens and gods. The white color associated with the element of metal is associated with death, often used at funerals and for funeral costumes. Both colors complement each other, representing the duality of reality in the famous taiji symbol ( divided circle known commonly as the „yin-yang” symbol). The green color assigned to the element of wood is associated with health and harmony. Yellow color belonging to the element of the Earth is all about the power for Chinese people. In the past, it was reserved only for the Emperor – the ruler of the Earth. It decorated his robes and many royal chambers and palaces. On the other hand, the red color, the attribute of the fire element, symbolizes according to the Chinese, such phenomena as new life, warmth, joy, and development. 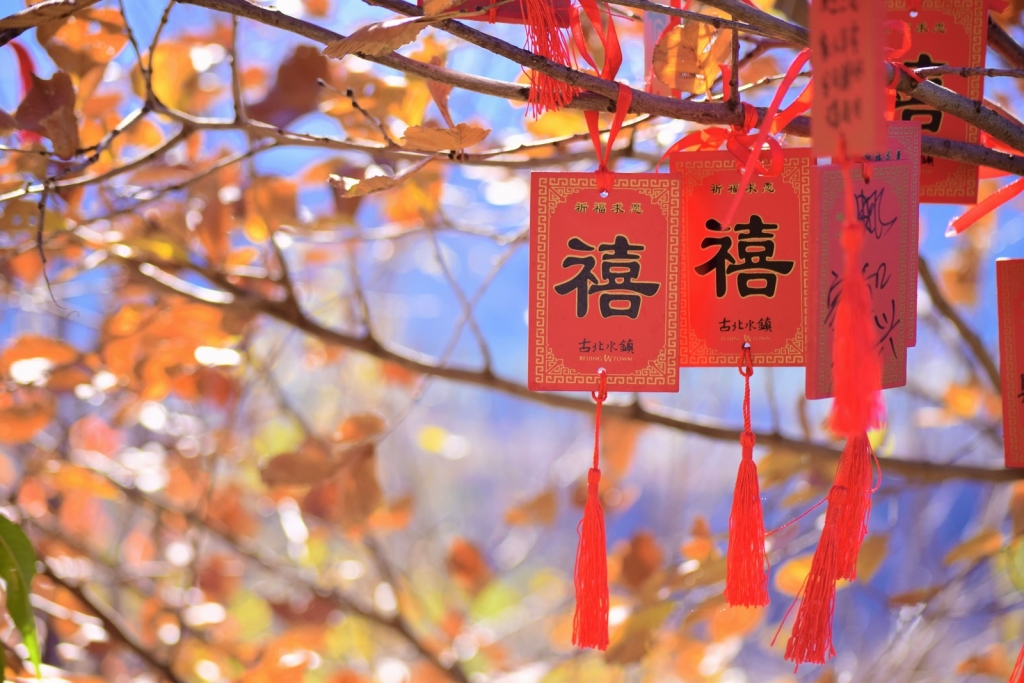 Over the centuries, the symbolism of colors has gained importance in culture as a necessary element of circumstances such as birth, death, marriage, religious rites, and social status. The theory of the five elements still plays a significant role, in so many different areas of life in China as architecture, music, traditional Chinese medicine, martial arts, and Feng Shui. It seems to permeate so profoundly into China’s everyday life, that nowadays it is difficult to draw a clear border, between the esoteric philosophical system of ancient China and … superstition. 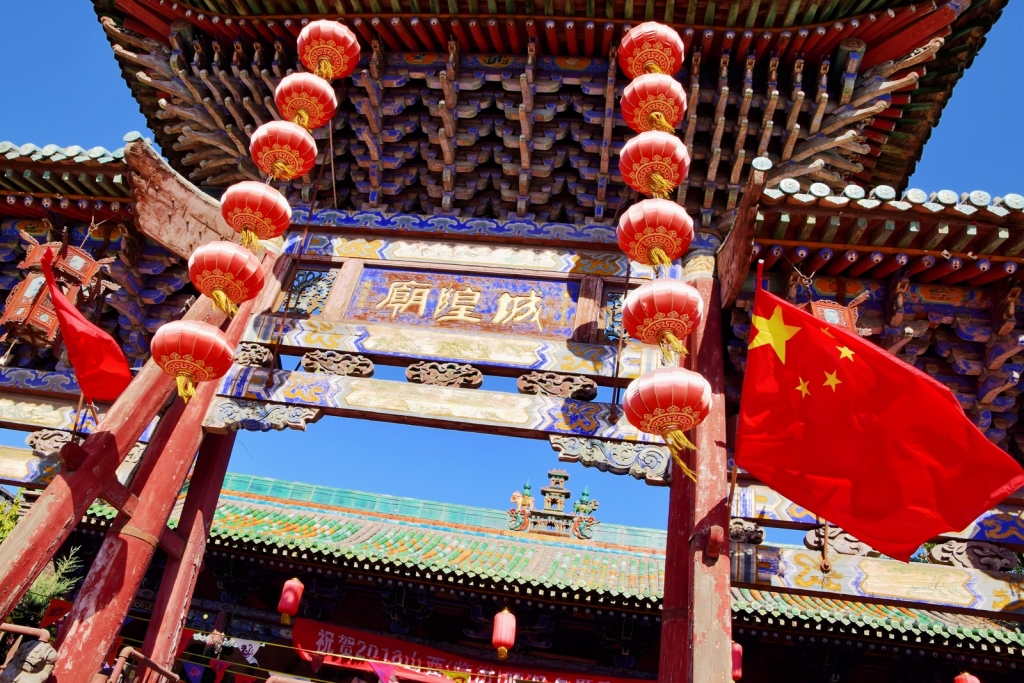 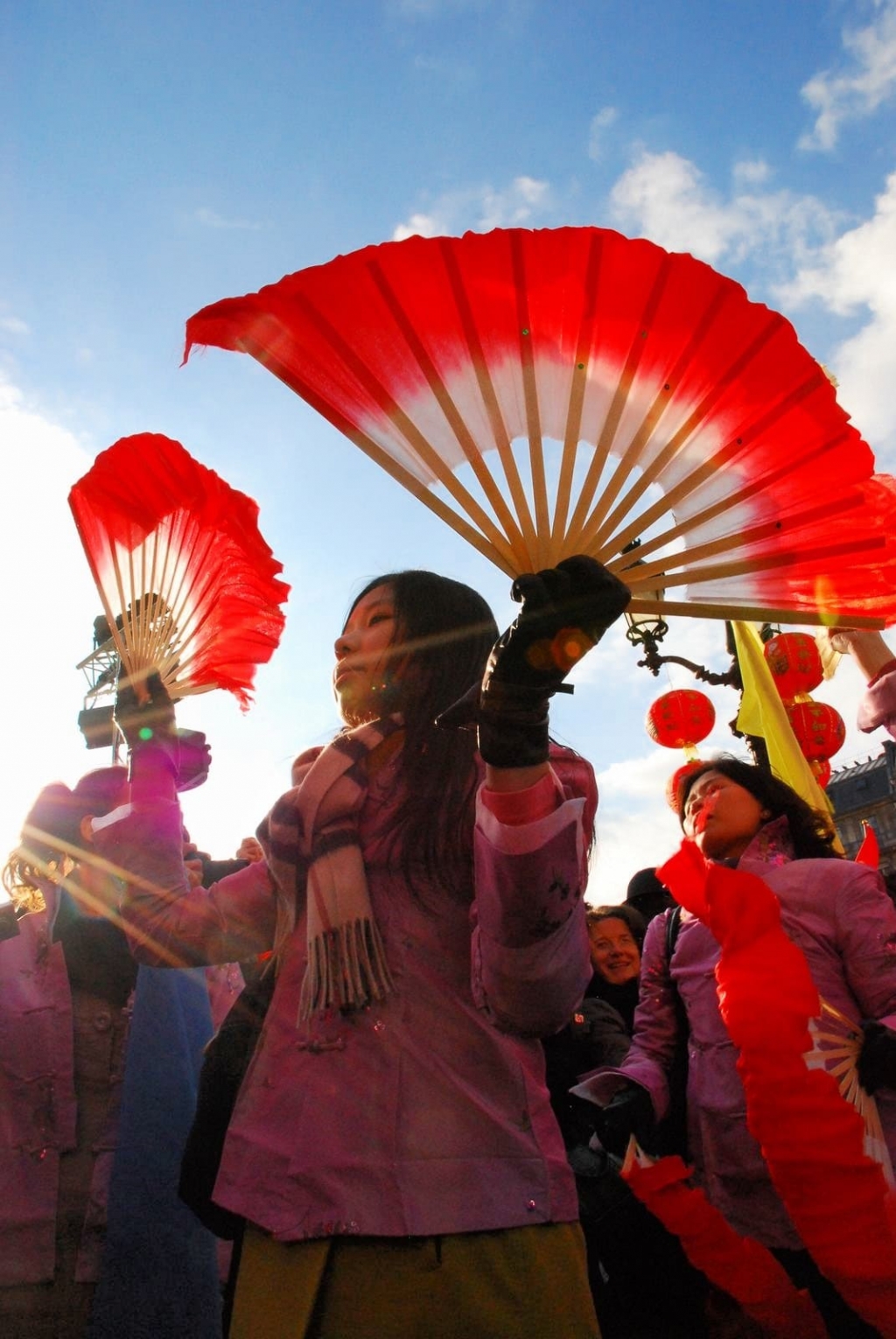 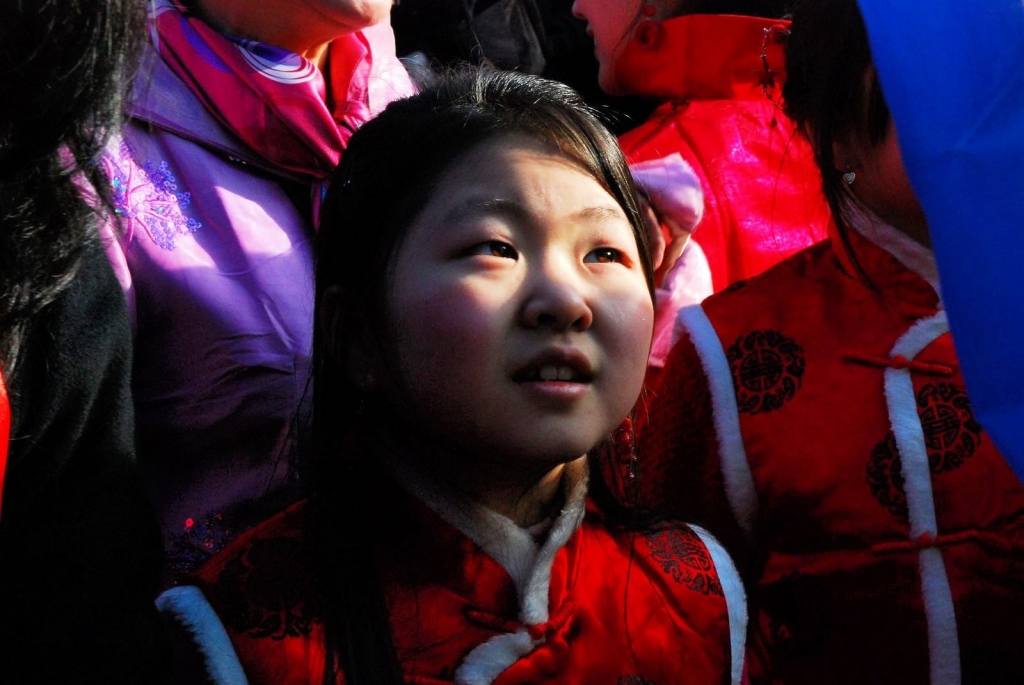 But let’s get back to red China, as some call it.

Each new year in China begins somewhere between January and February, the exact date determined according to the Chinese lunar calendar. It is greeted with great joy by various ceremonies throughout the country. Streets and buildings are decorated with a sea of red lamps. Houses are carefully cleaned and decorated with red verses of good wishes on the door frames. On the window panes, carmine paper cutouts with the Chinese letter Fu are marked, meaning happiness, and the knots characteristic of China, braided with red thread, complement the colorful decoration of the house. For a festive dinner, the Chinese also dress in red, and the favorite New Year’s gift is a red envelope with money inside.

Chinese wedding and the birth of a child

The Chinese wedding also runs in the colors of the fire element. Traditional costumes of Chinese honeymooners are entirely red. They also use red components to decorate their heads, a red knot symbolizing the union of the spouses, as well as the red throne, or chairs on which they sit. Who in our part of the world, would dress up in a poppy dress or a bright red suit? White wedding clothes, identified with the symbol of purity in the Catholic religion – for Chinese people are an unflattering omen. When a child is born to the spouses, one month after birth, a party is organized to present the new family member to his relatives. The name of the ceremony – a celebration of red eggs- is associated with red-colored eggs, that signify excellent news. They are handed as a present to the guests, in thanksgiving for arrival. 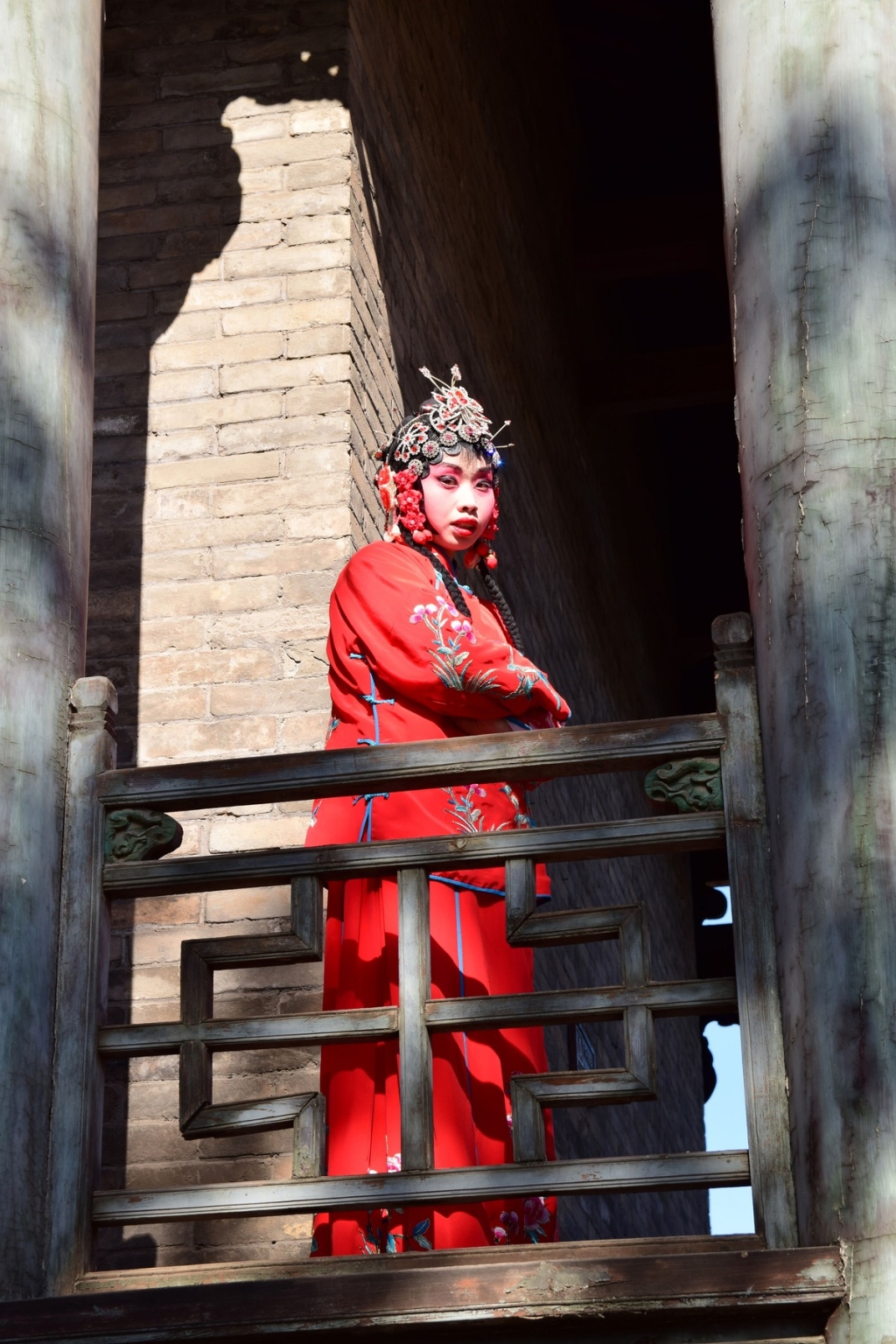 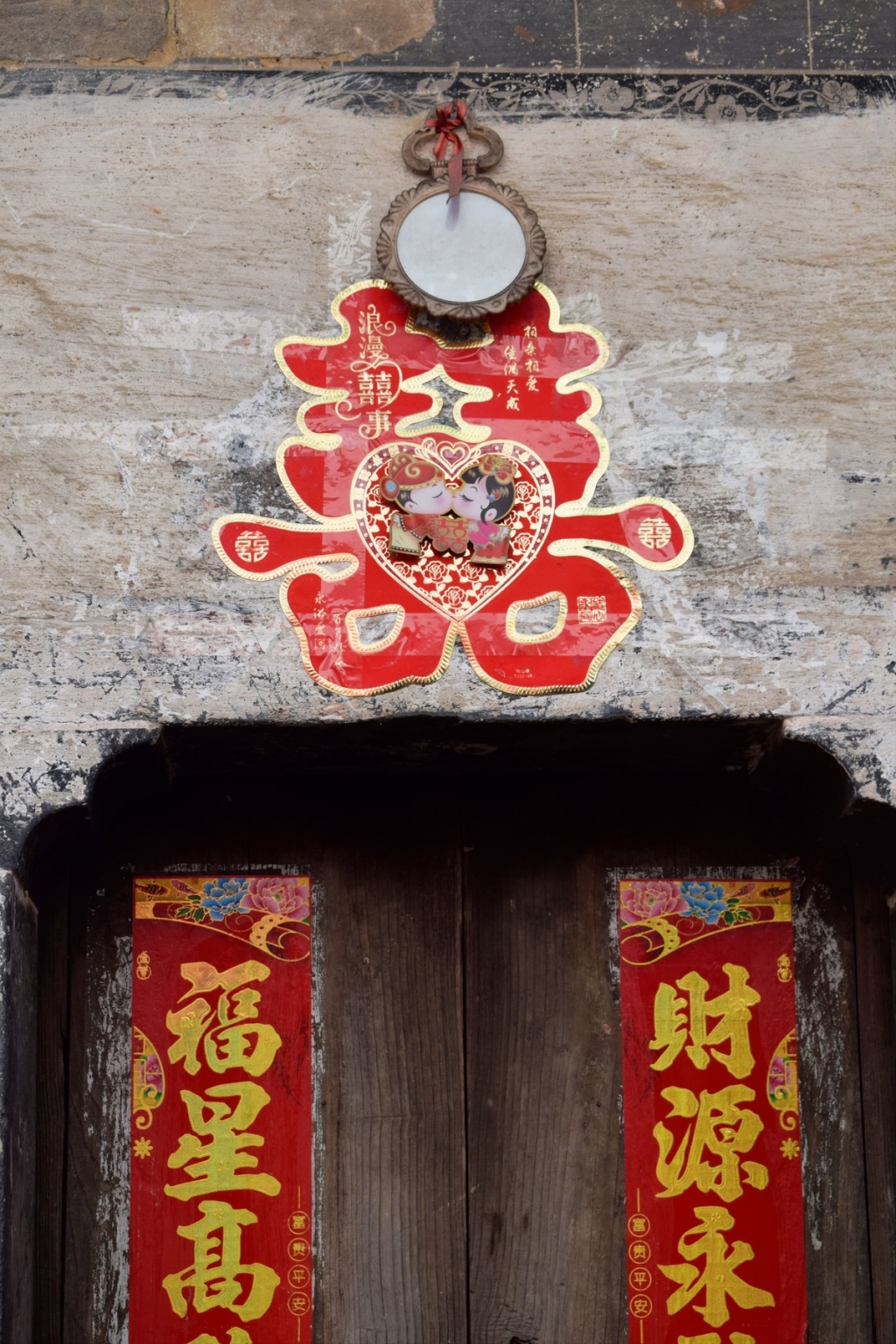 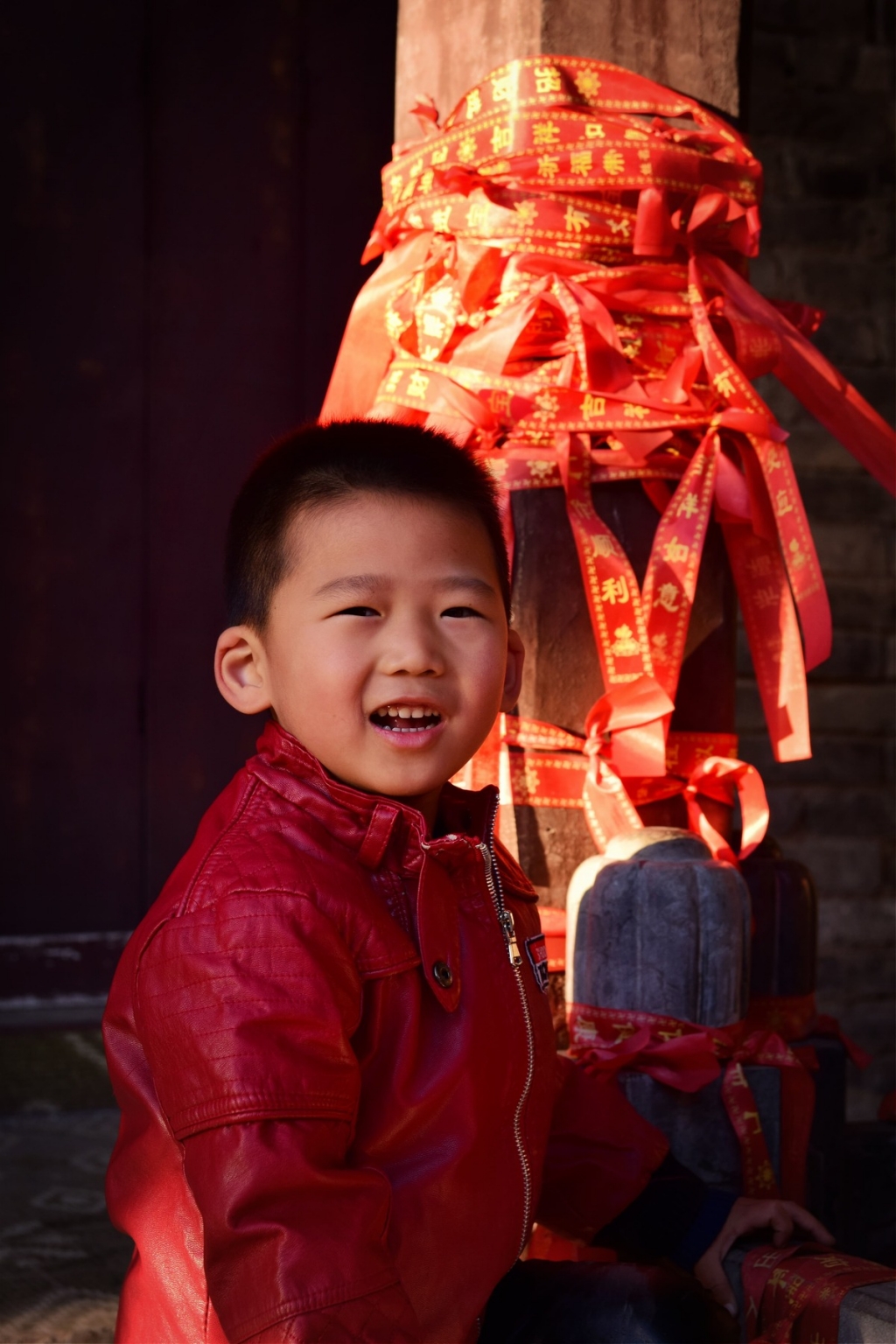 Many characteristic buildings in China have red facades, walls, and decorations. The most famous building of imperial China – the Forbidden City complex- is a compilation of carmine dominant everywhere and yellow or gold finishing elements. Also, you can encounter frequent red bell towers, red temple complexes, palace walls, and wall paintings. 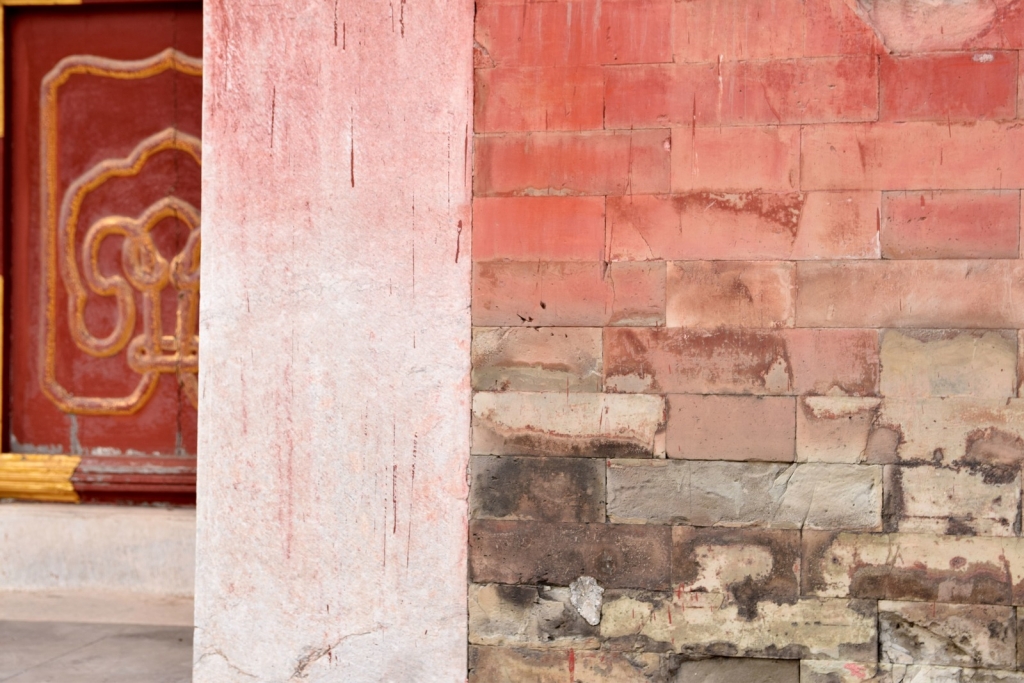 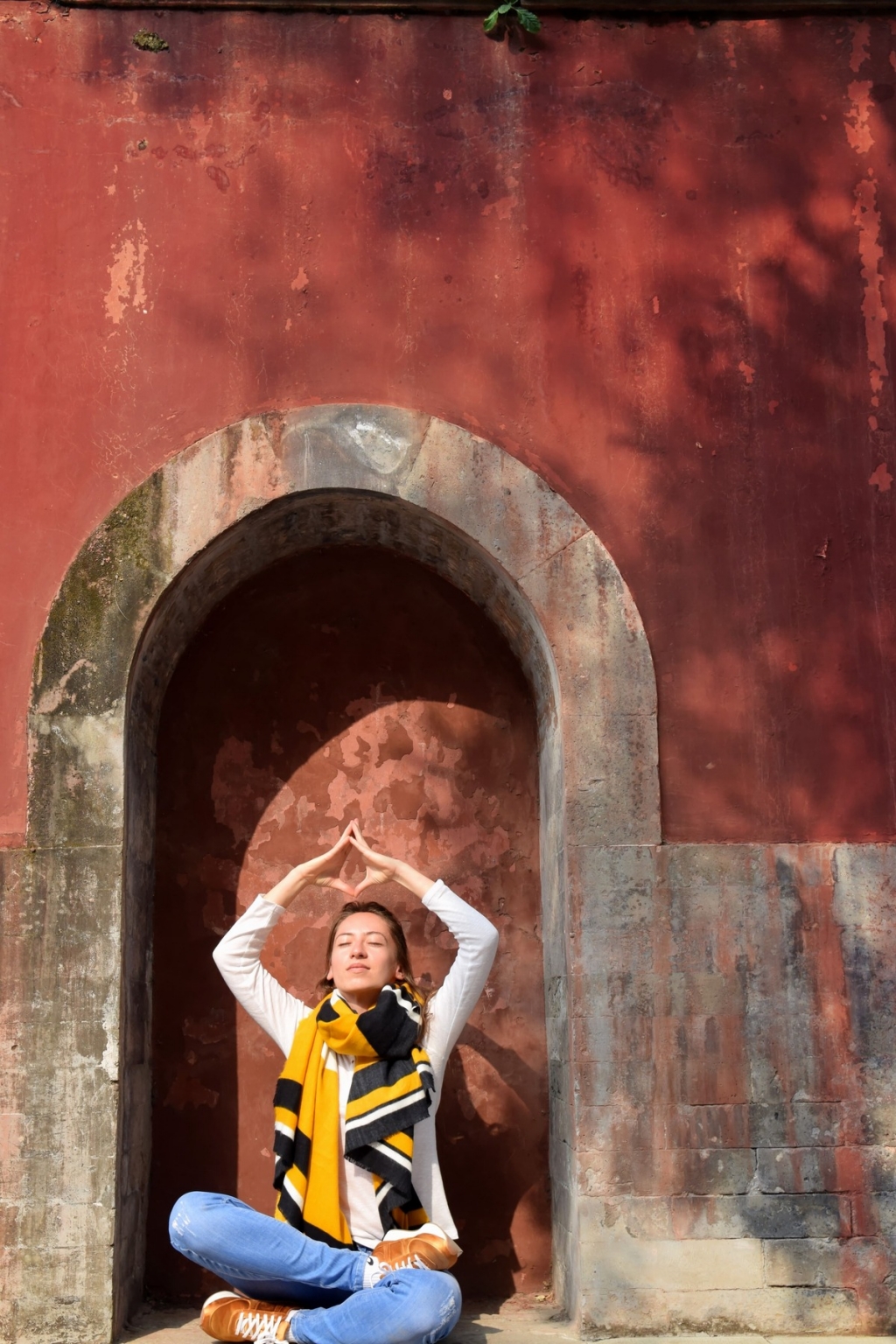 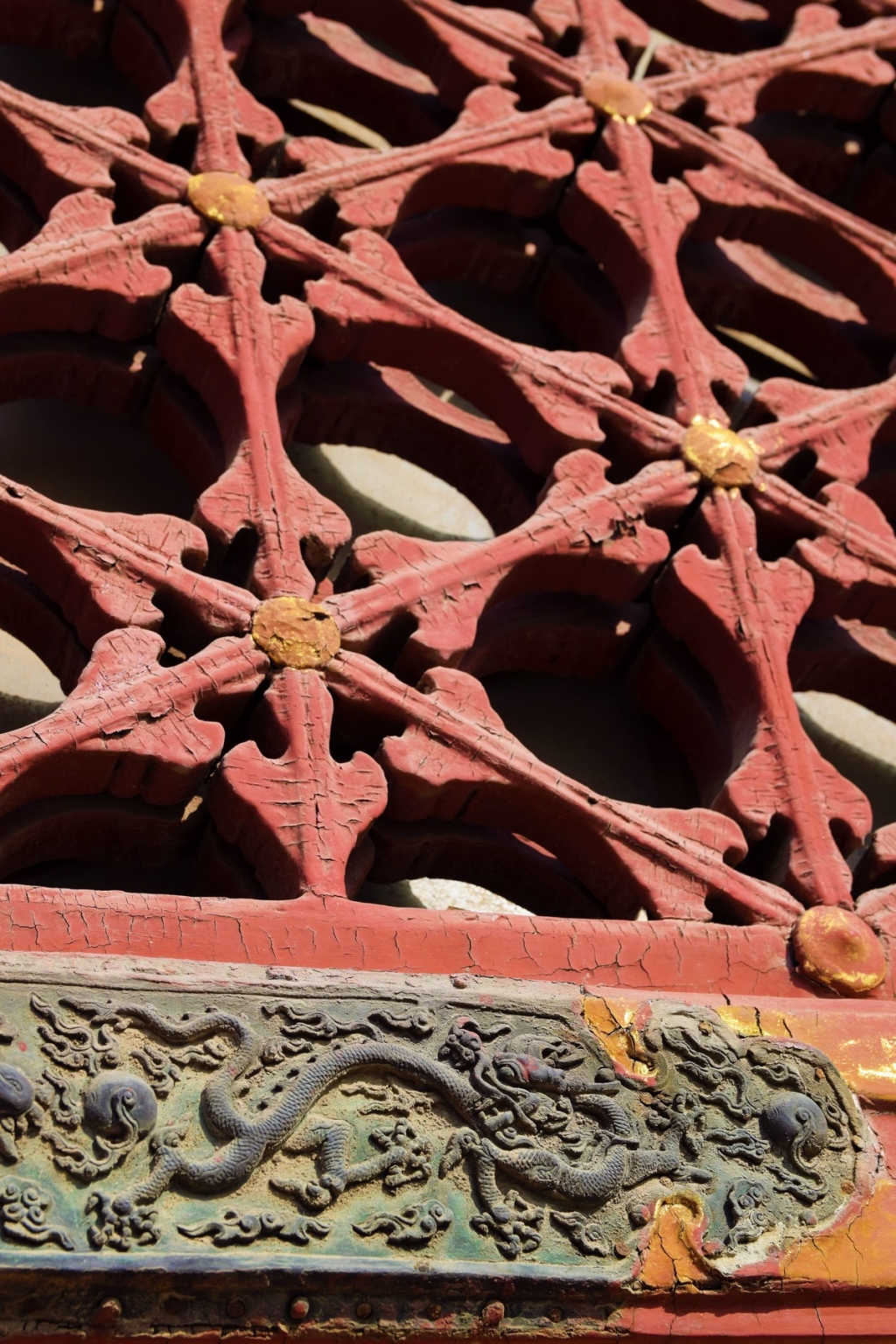 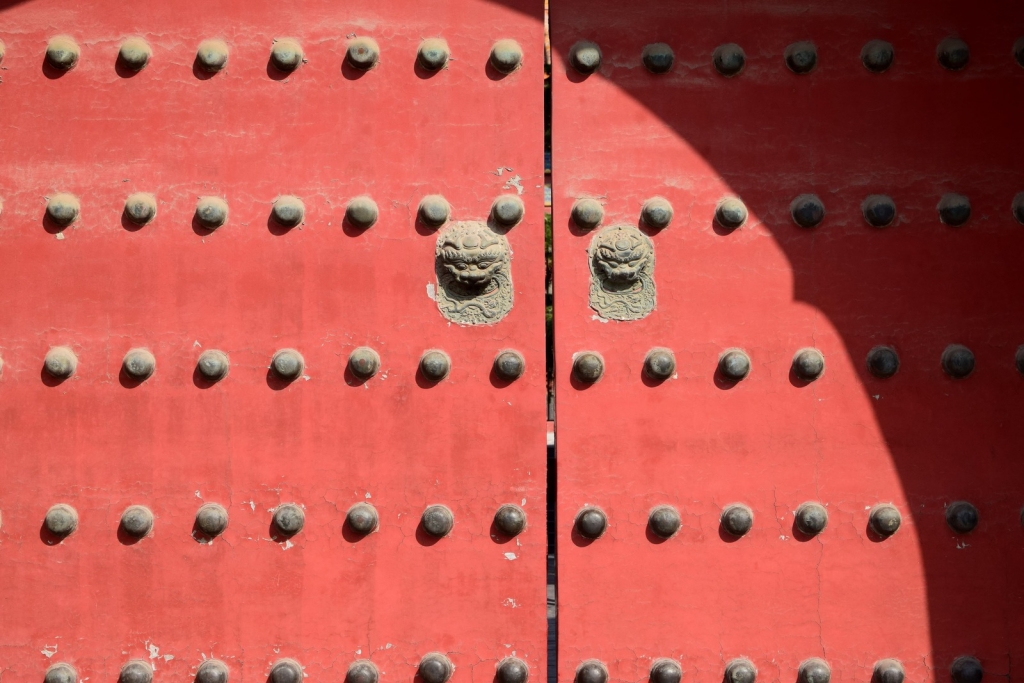 In the twentieth century, the red color was used by the leaders of the Chinese proletariat and later socialism, in Mao’s time, as the ancient symbol of Chinese heroism, courage, and rebellion. It is through these recent events and subsequent association with communism, that it seems to us, newly arrived at this state, that red is only the legacy of the political system. This is the case with many aspects of life in the Middle Kingdom. With the inevitable flooding of China with Western fashion, it is often difficult to distinguish a globalized present, from the ancient traditions of the oldest, ever-lasting civilization in the world. Three thousand years of uninterrupted history are still an inviolable basis for China that is modernizing so quickly today. 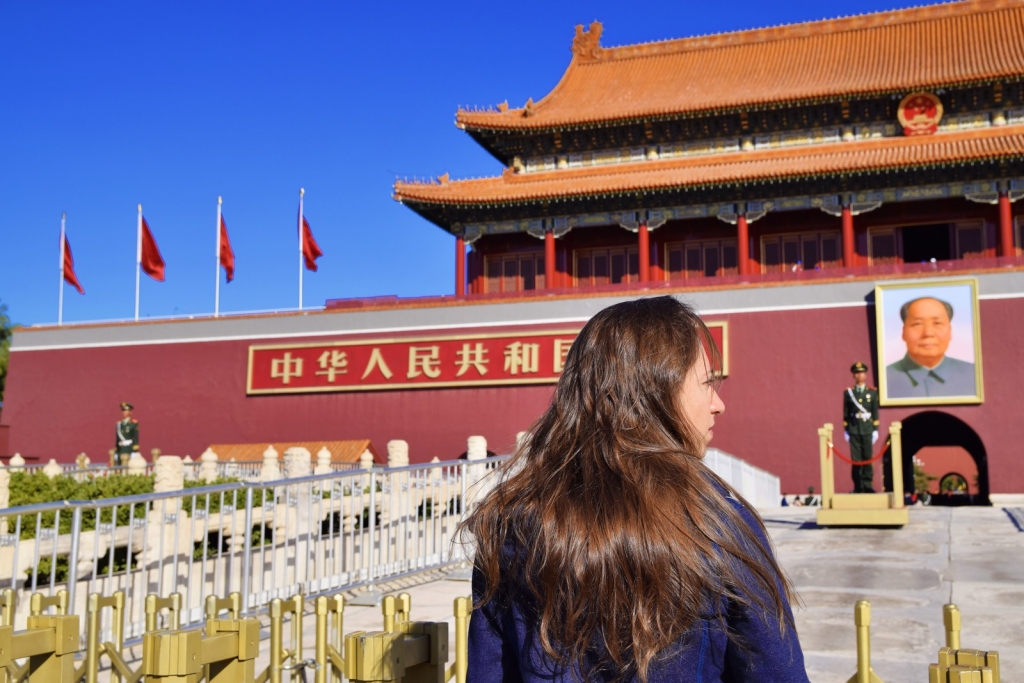 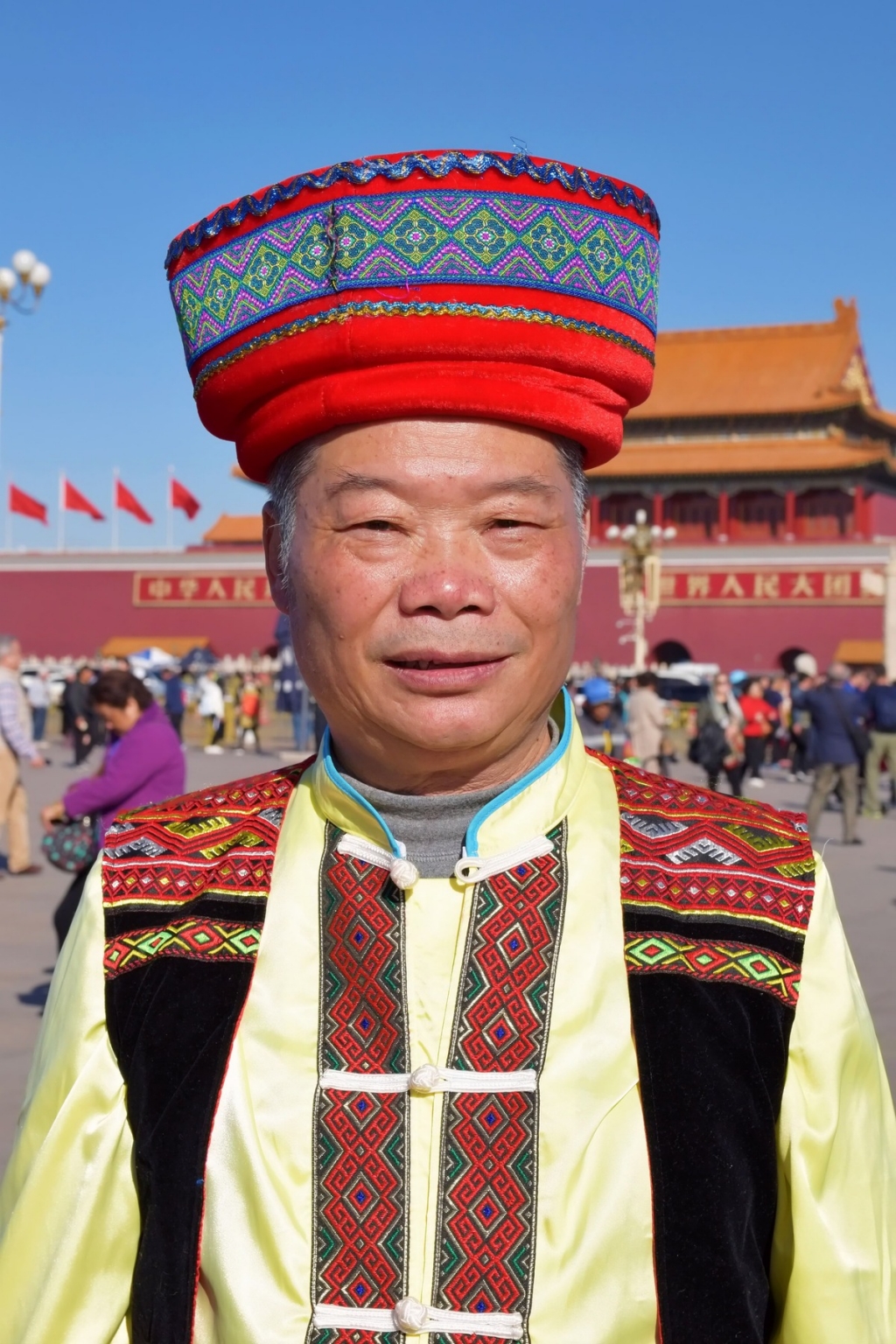 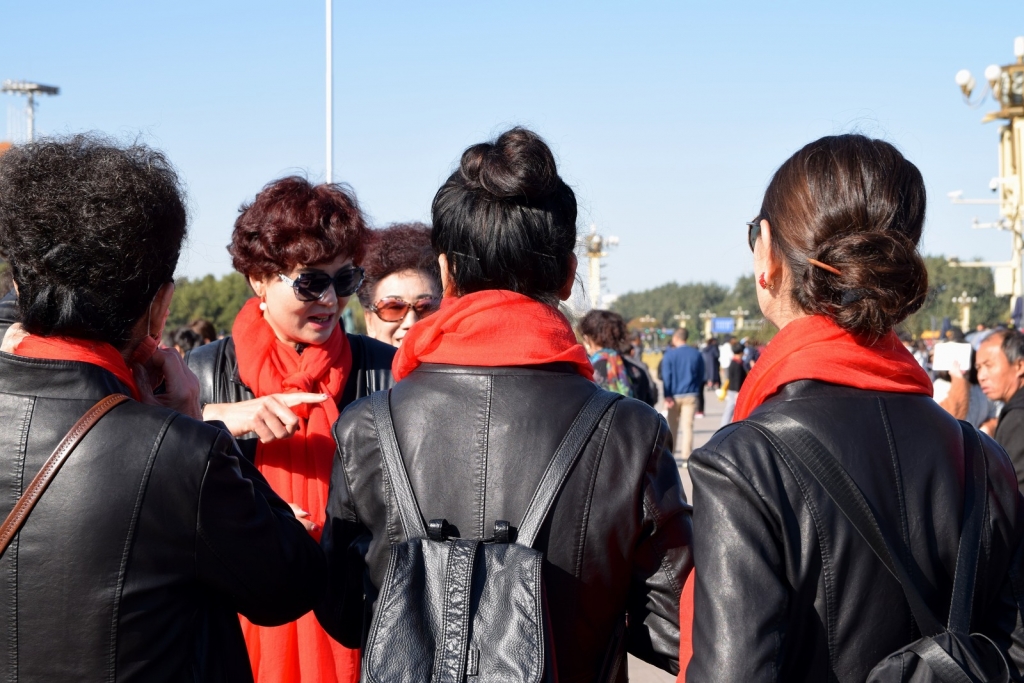 Traveling there, every time I’m amazed. Seeing a reality familiar to mine, I systematically discover the deeper layers of the Chinese system of beliefs and values, so different from the concepts of the West where I live. I always approach with a distance to what I see in China, and I know that my first response will require a subsequent correction, after exploring the history, culture, and beliefs of this original country. Concepts, ideas, and interpretations of phenomena that seem universal to us in China, often prove to be useless. By adopting the unique form of five colors, contemporary China is invariably intriguing. The optimistic red dominating everywhere, for the first time in history, fills the hearts of the Chinese people with hope for a better tomorrow. The ages of oppressing this powerful nation, have finally brought the long-awaited thaw. Continuously controlled and humiliated still on many levels of life, they seem to coexist with modern rulers better than ever before in history. A series of political reforms undertaken in the 1970s, which continue systematically to this day, initiated positive changes in the economy, society, and the way of life of a standard Chinese. Once, dying of hunger in a poor province – today, he lives in a big city, providing proudly for his family. Once, spending all his life in the place where he was born, today he can travel all over the country with a network of high-speed trains built for him by the government. He eats up, sleeps on a comfortable bed in his private home in municipal apartment blocks, expanding his family as part of the recently abolished one-child policy. Today’s Chinese, infected with a real enthusiasm for the changing times for him, with rosy cheeks, full of hope, marches energetically every day to work. This red blush, always visible on the faces of passing people in China, remained in my memory as the characteristic color of this wonderful country. It has become a symbol of the tendency of change towards a better, perceptible expression, of the dreams of a happier life being fulfilled.