Coral dunes glisten with all shades of gold.

Although they are called pink, it was difficult for me to decide on the specific color of the phenomenon, that presented itself before my eyes. Sleepy groups of clouds glided in the sky, pushed by the bored morning wind. Along with the changing light, sporadically illuminating the scenery with rays of the sun, the dunes were changing. Their color, shape, and sense of distance, were different every instant. 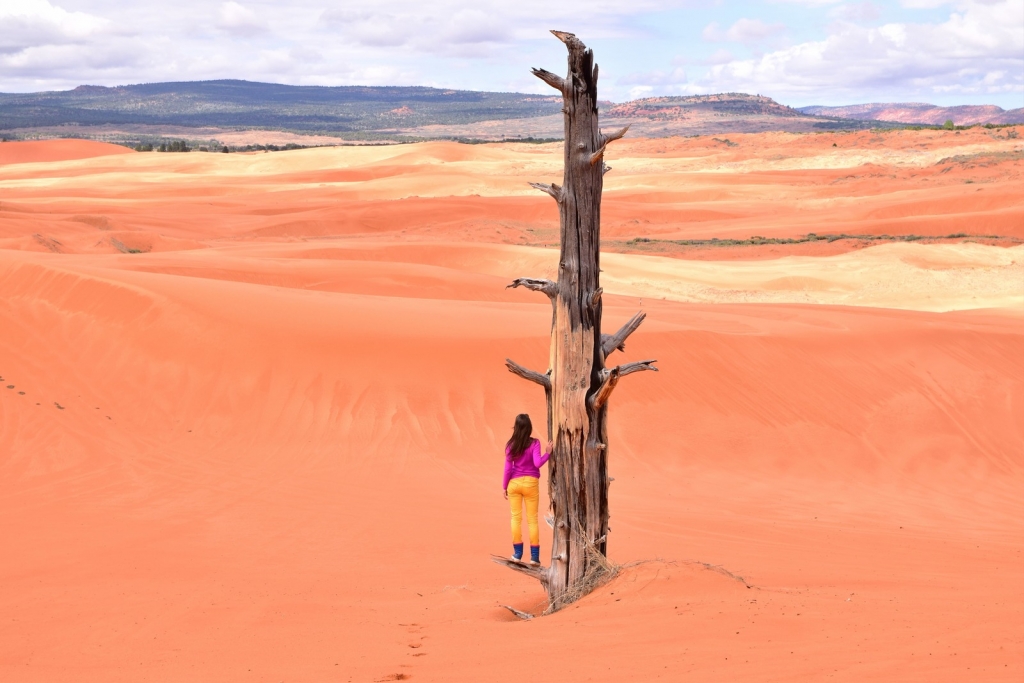 This soothing endlessness, gently waving horizon, caused that my imagination went far beyond its spatial and temporal frames. It was easy to imagine prehistory, the recent past, and paint different scenarios of the future. The dunes had something magnetic. The peace emanating from these noble forms of the landscape did not let go away, and the mind, not disturbed by the impulses of civilization calmed down and allowed for sweet daydreaming. 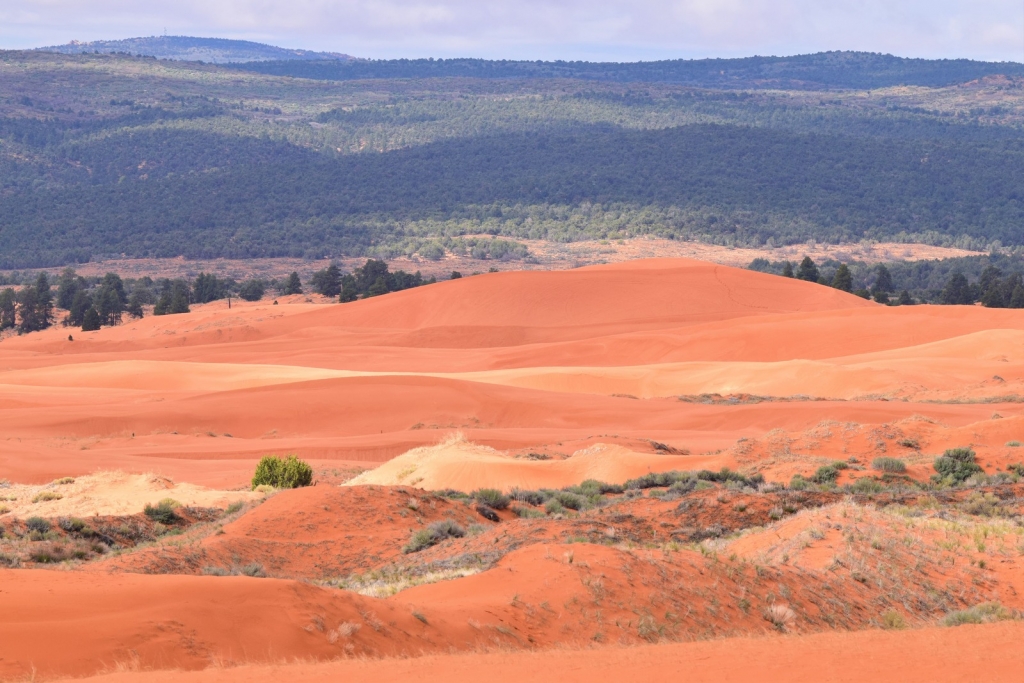 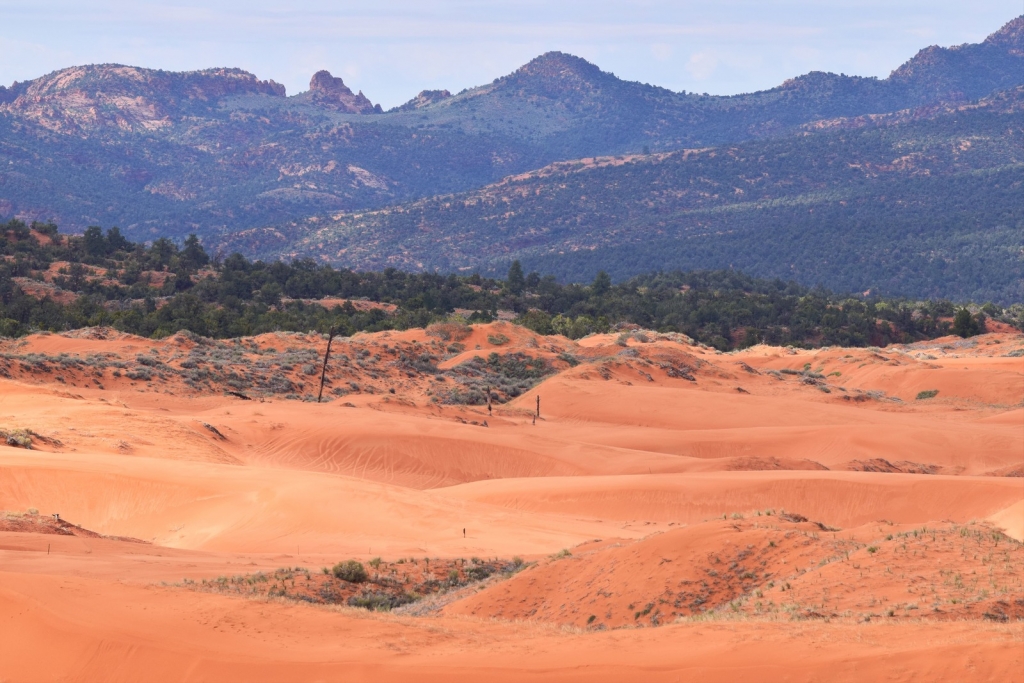 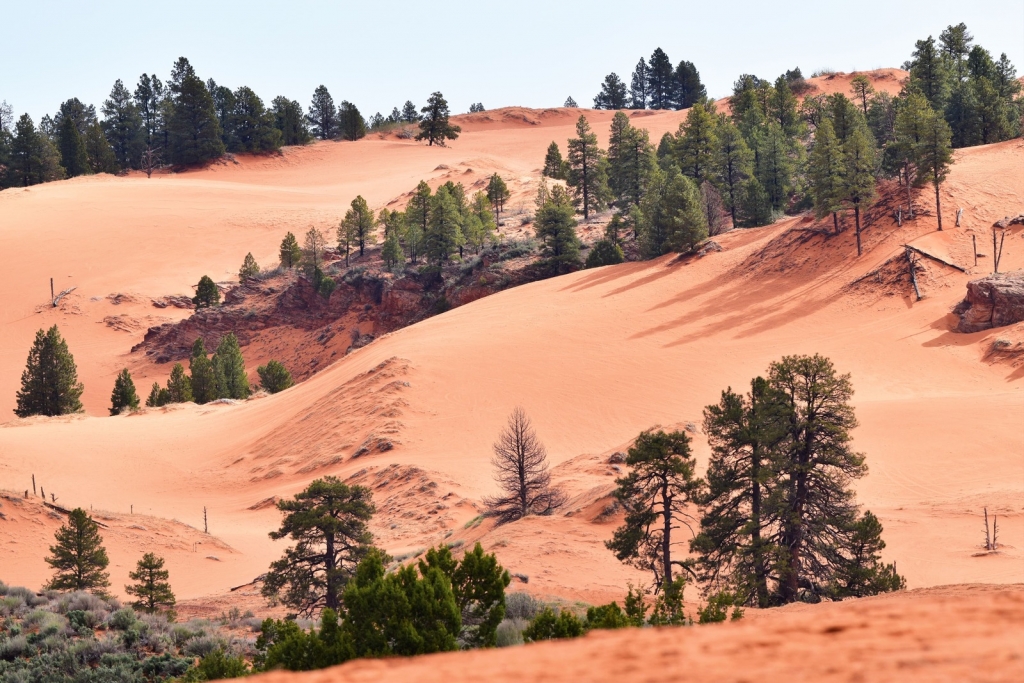 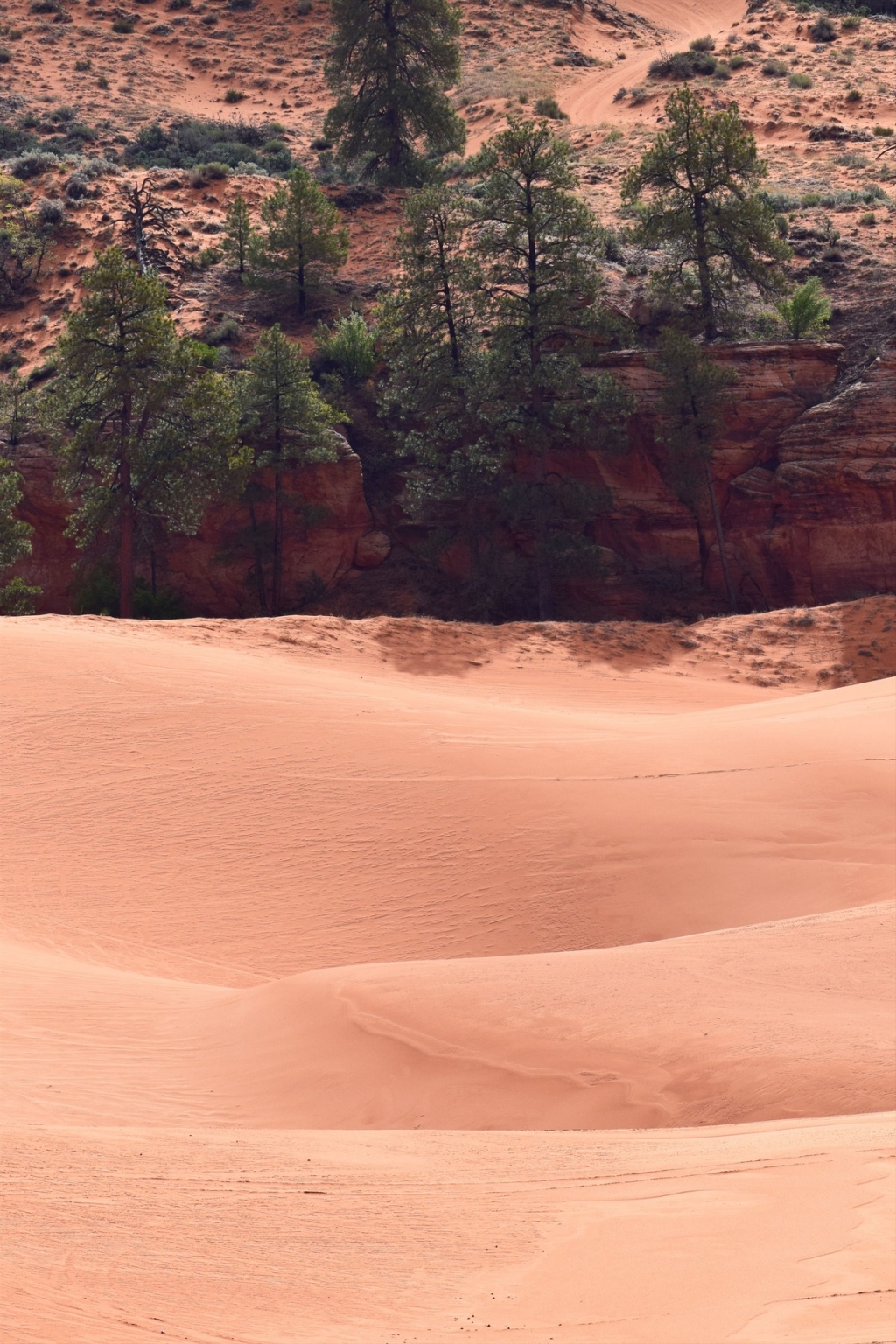 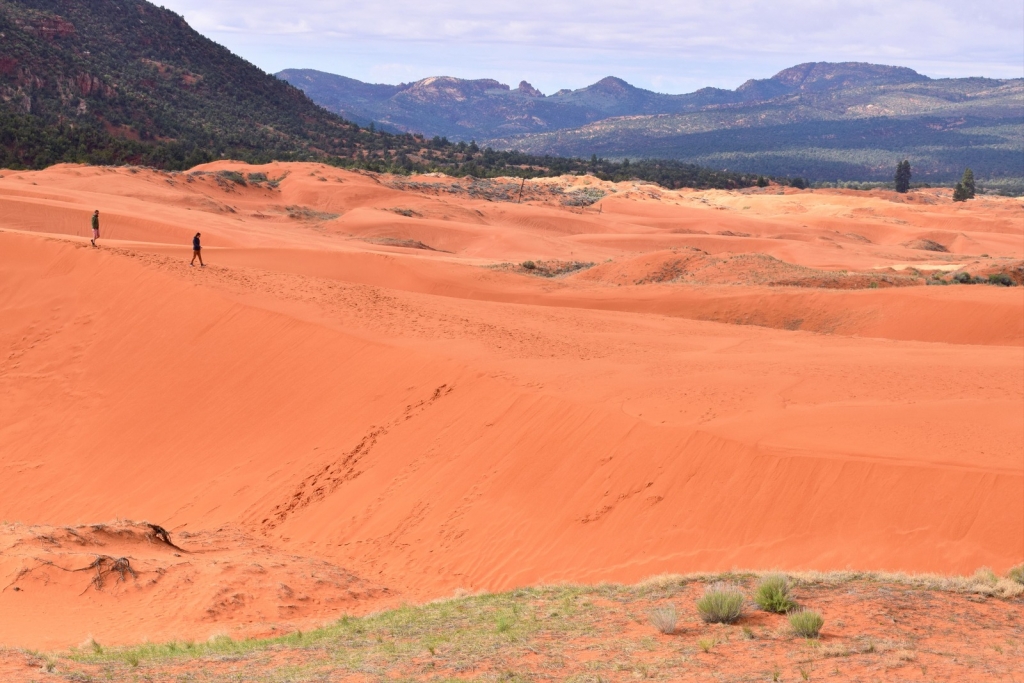 Coral dunes are a little-known place, on the standard map of the tourist conquest of America. The nearby Zion National Park, or the northern edge of Grand Canyon, attracts most of the attention of tourists traveling on the Page – Springdale route. The smaller American reserves are often unknown, and if so, there is no place for them in the busy tour plan of visiting these larger, popular parks.

Despite the low popularity of places like this, I try to appear in the parking lot as soon as possible. Being the first or one of the first visitors, the dunes glowed for almost an hour only for me. With time, more and more people wandered around the reserve, and before noon, many colorful spots appeared on the dunes. In the afternoon, the tallest of the dunes was filled with sand boarders sliding on their colourful sandboards. The area of the park is huge, and the difficulty in walking on the sand, makes tourists concentrate in selected places, leaving most of the desert for nature, walkers and, unfortunately, often also for off-road cars rented for tourists. 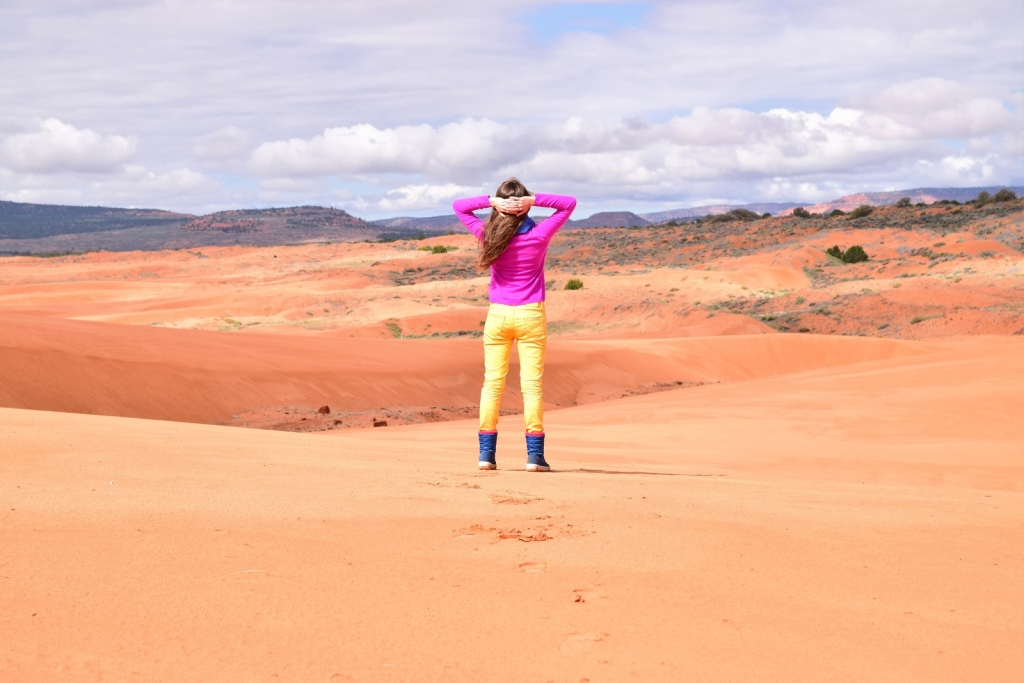 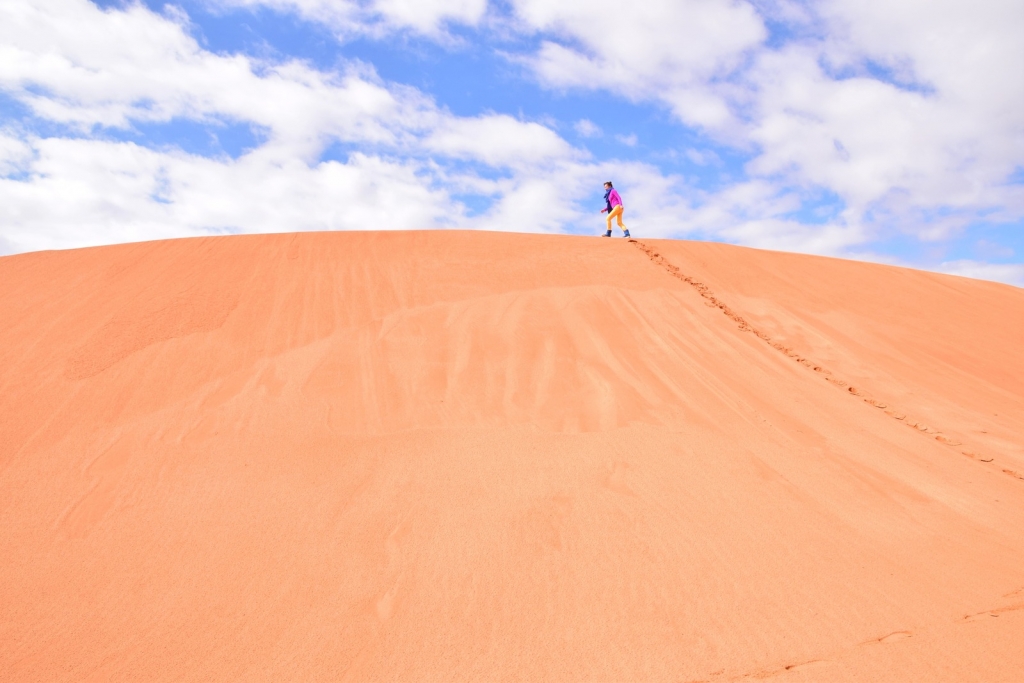 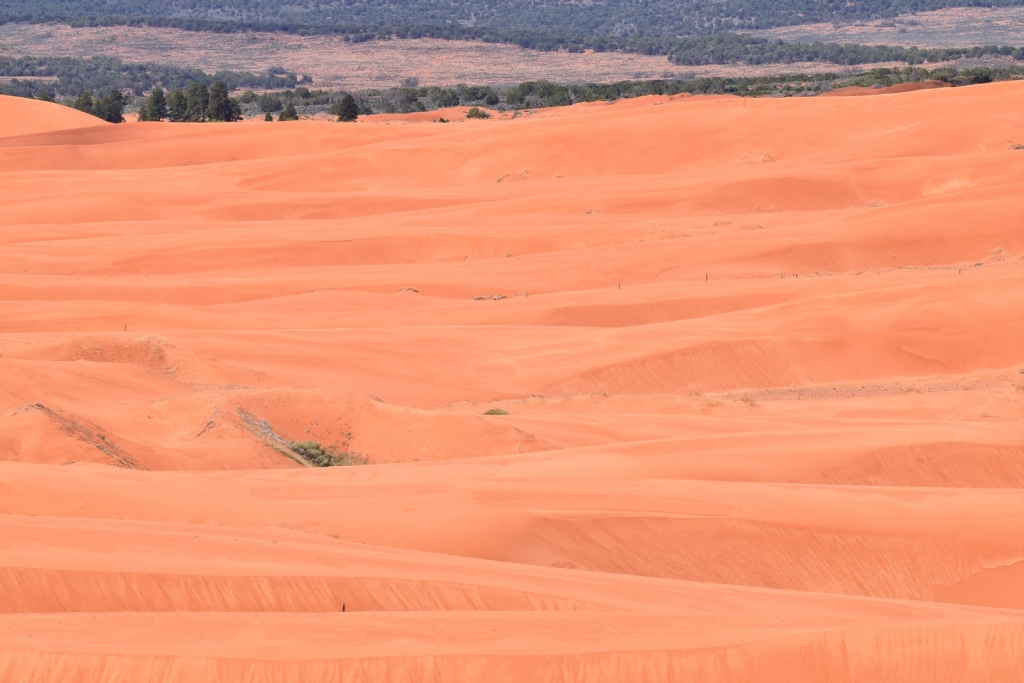 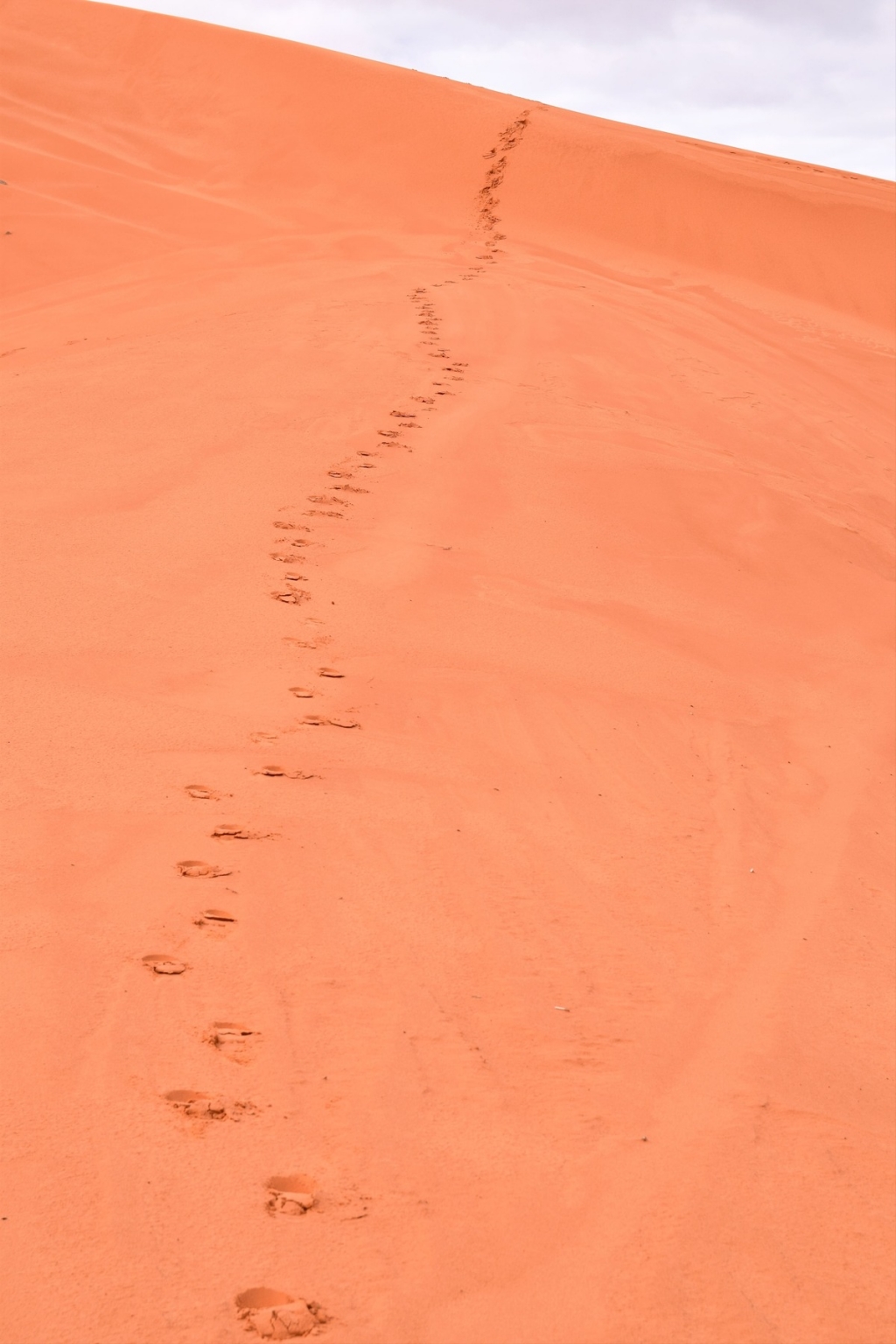 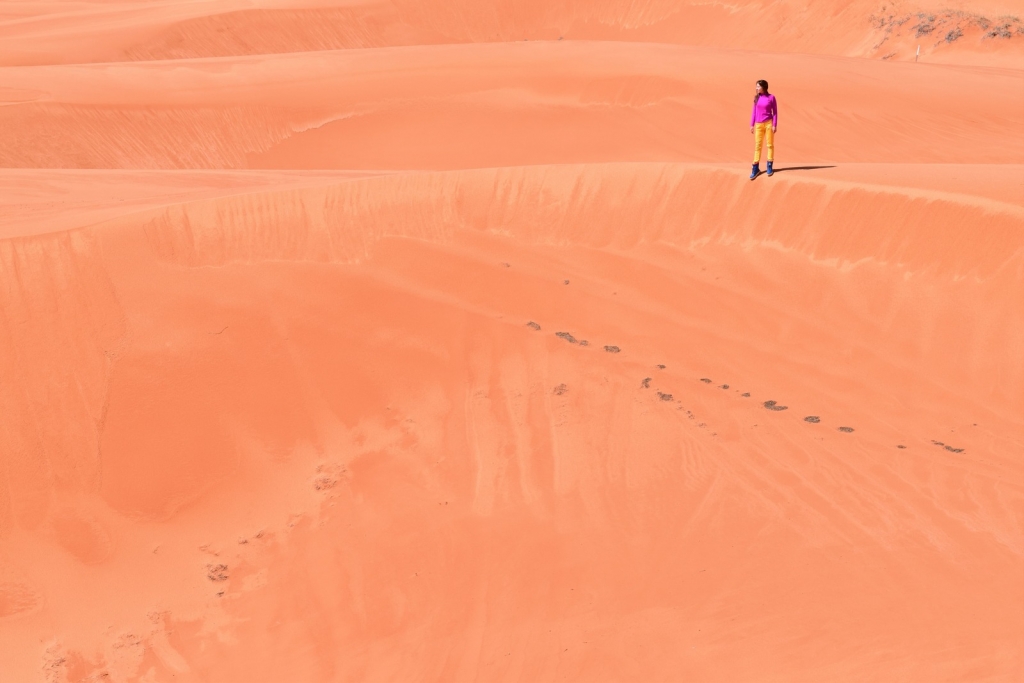 The dunes were created as a result of an interesting process.

Walking around the reserve you cannot resist the thought, why so much this colored sand accumulated here, and not elsewhere? There are no such large clusters of it in the area.

The specific terrain is the answer to this issue. Coral Pink Sand Dunes Park, is located in a unique mountain basin. In its southern part, where the mountain ranges are the highest, there is a clear notch. Strong winds blowing from the south, passing through this mountain narrowing, gain so much strength, that they cause erosion on the rocks, which in the form of loose sand particles, accumulate in the place of the dunes. The process was called the Venturi effect.

So, the dunes are still growing. 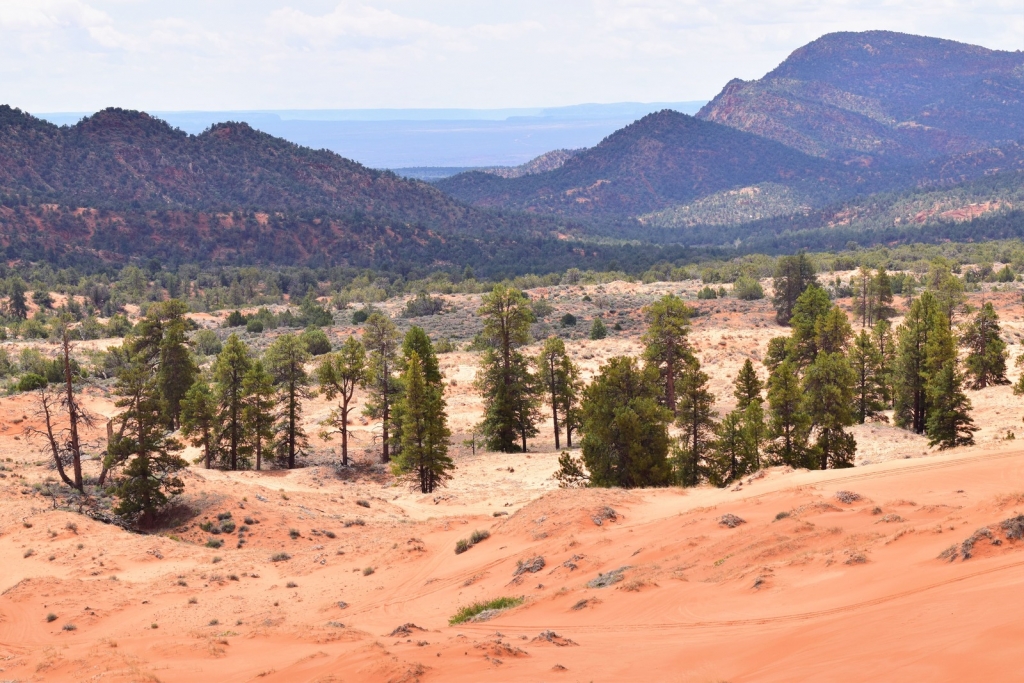 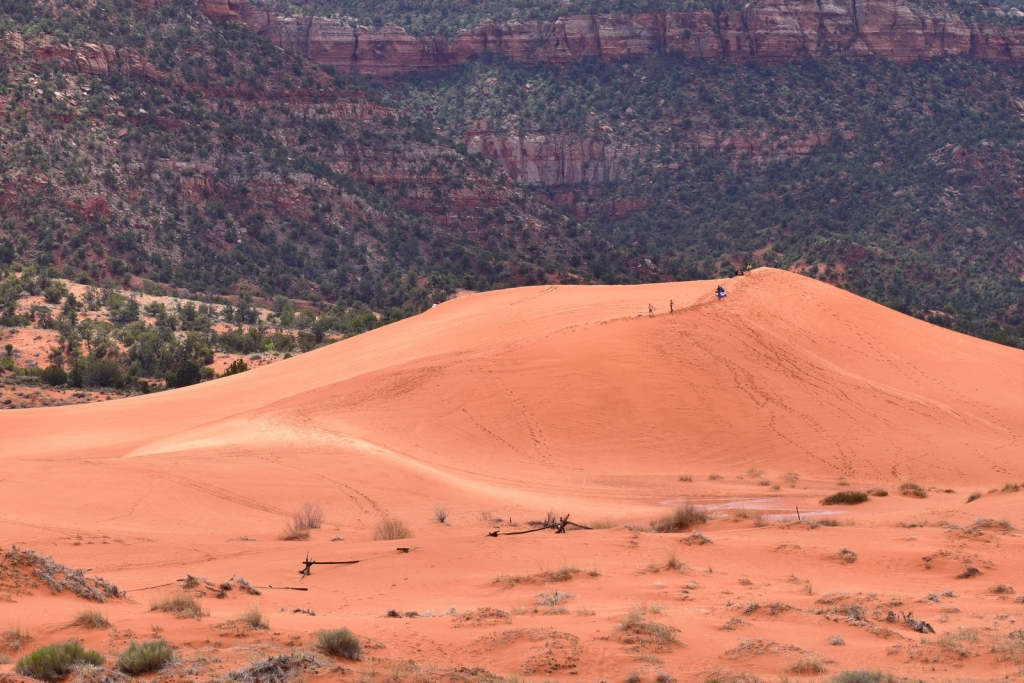 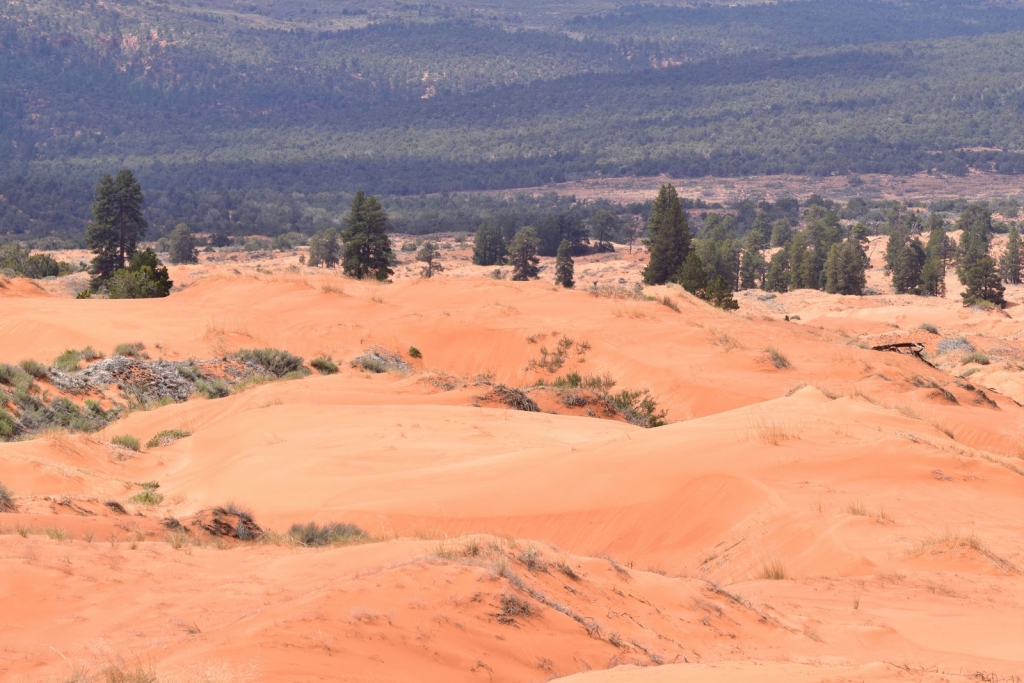 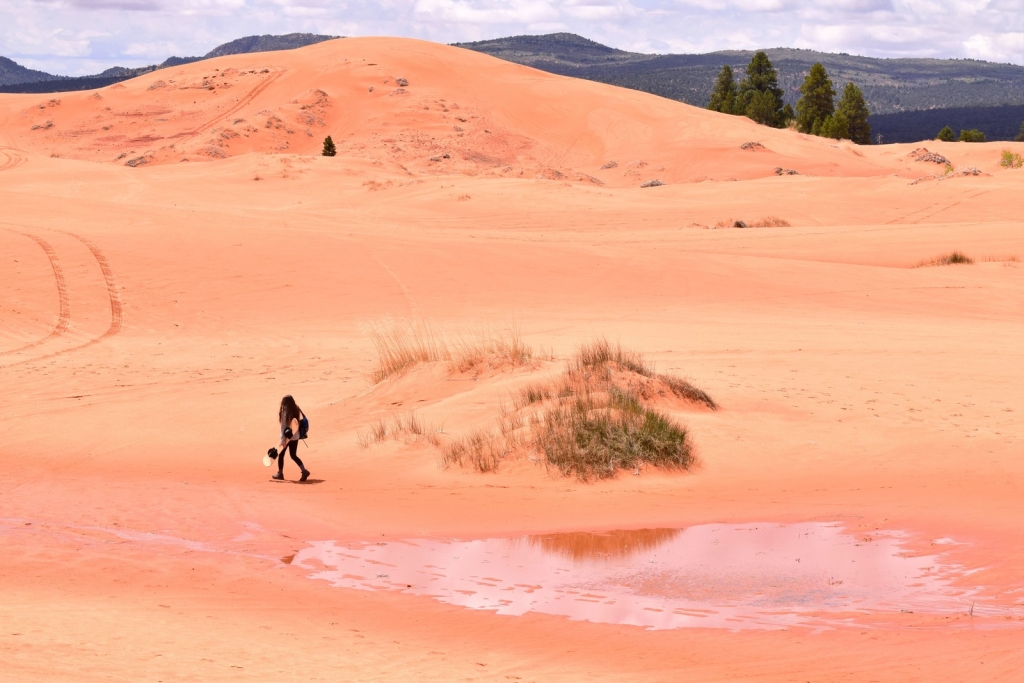 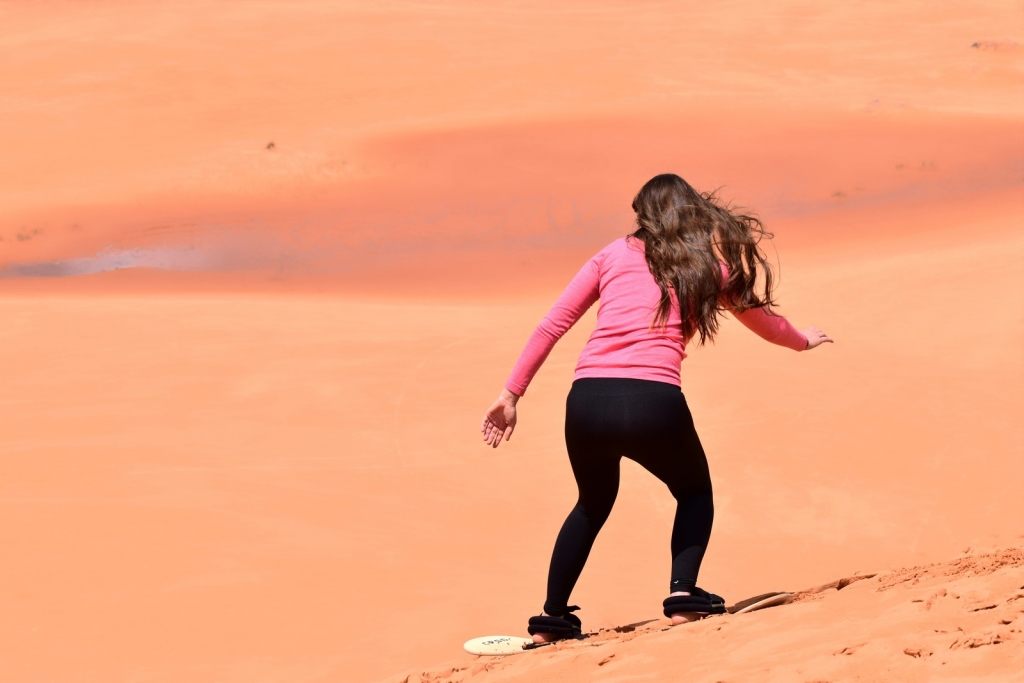 The park is open all year round.

The fee applies only in the main part of the park, at the Visitor Center. Other parts are free.

How to watch the dunes

The dunes are a popular destination for off-road vehicles. Unfortunately, they destroy the dunes landscape, and in my opinion, it is a great shame for a park, that should be protected from such human activity. Fortunately, the sand is systematically accumulated by the wind, and the vehicle tracks disappear after a windy night. Its northern part is higher and from there, you can see the most beautiful panorama of the entire park.

Attractions organized by the park 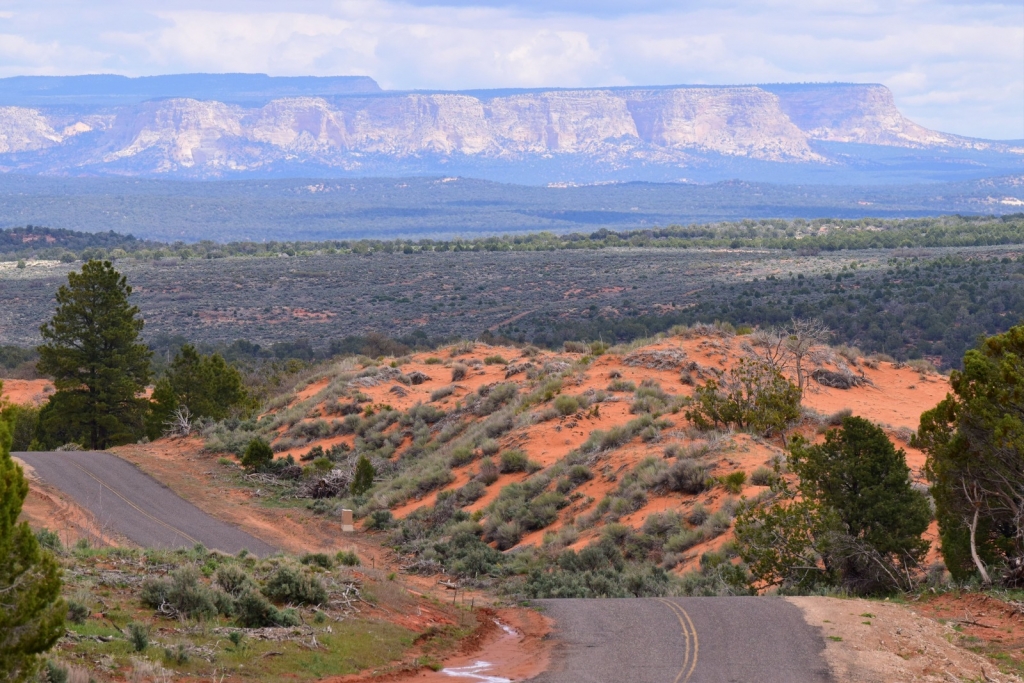 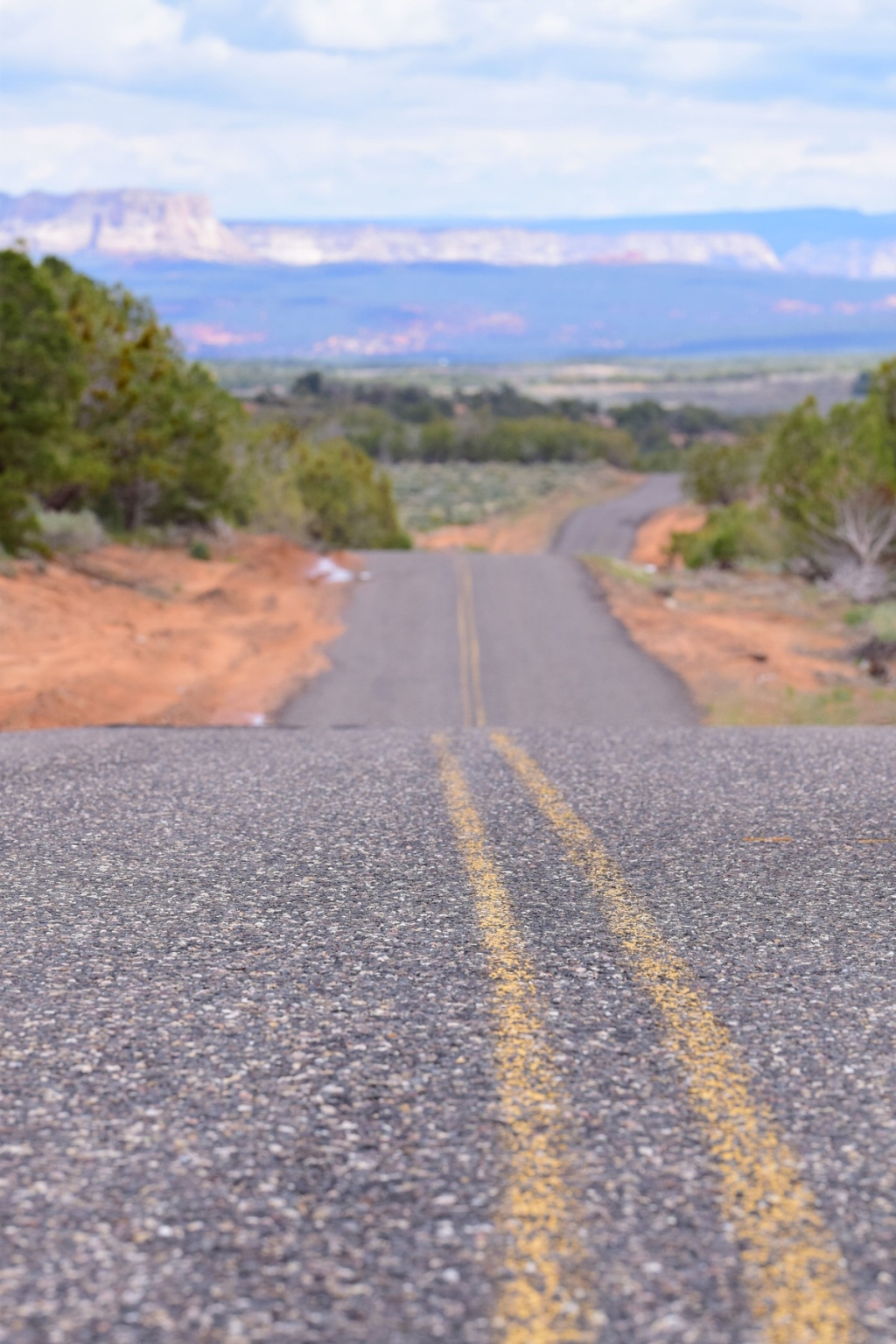 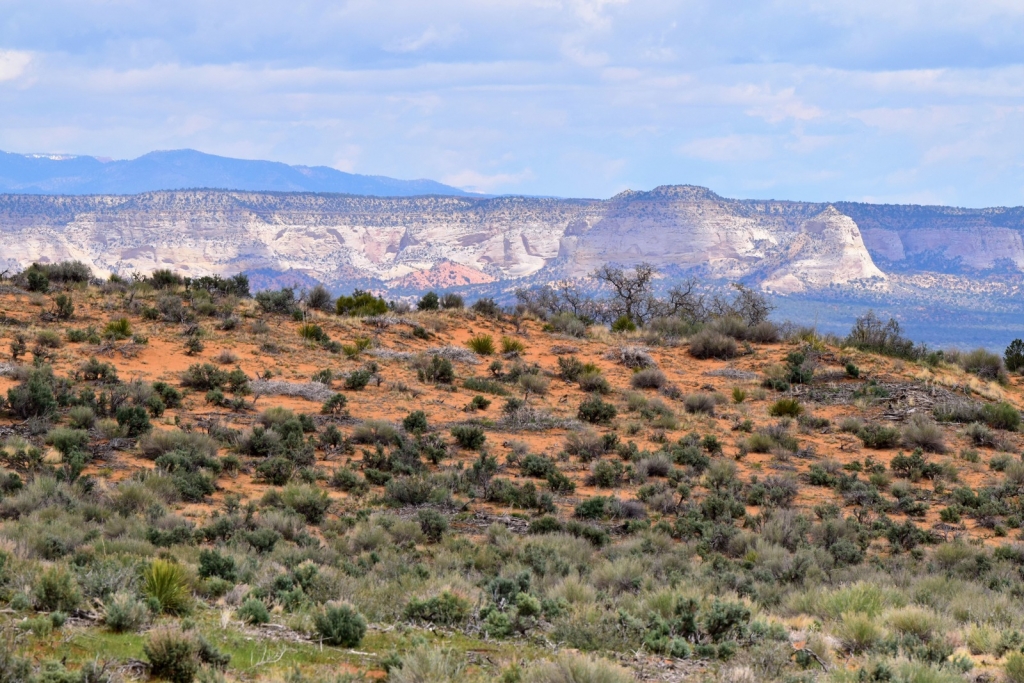