Geometric beauty in the Alhambra

A house is like a man – in accordance with Arab faith – should be modest on the outside, while inside, it should hide the beauty and richness of the spirit.

Standing in the queue to the Nasrid palaces for the first time, it is difficult to imagine the splendor and richness of the decoration inside the building. A house is like a man – in accordance with Arab faith – should be modest on the outside, while inside, it should hide the beauty and richness of the spirit. I remember my first visit to the Alhambra castle; I was dazzled by the ornamental decorations, and I could not focus on anything properly. According to the schedule of the guided tour I participated in, I found the pace was inadequate to allow any deeper contemplation, of the surrounding luxury. I was more interested in the palace’s history and the massive size of the fortress and its gardens than the sophisticated details of the decorations, on the walls and vaults. It was only during the second time, when I traveled to Granada calmly, having the whole day available to visit this vast compound, that I had the opportunity to take a closer look at these great designs. 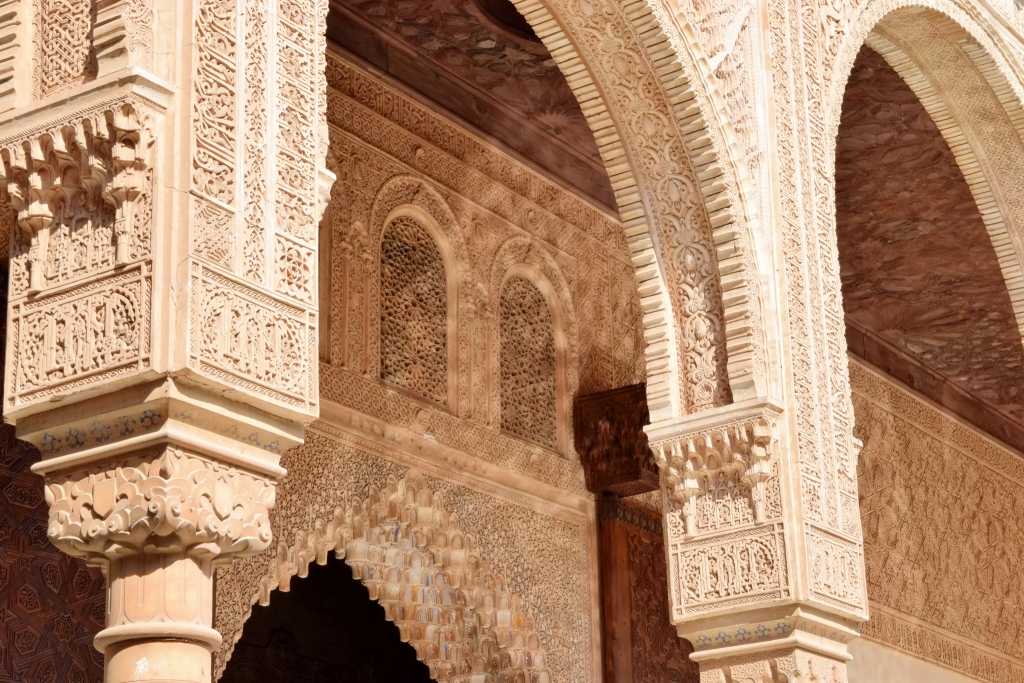 Al Andalus was a vast Muslim territory on the Iberian Peninsula.

The city of Granada, surrounding the Alhambra’s hill, seems to be built on purpose for admiring this picturesque monument. However, the beginnings of the town of Granada, go back far from the construction of this, now valued in the whole world, Arab palace. The first settlements of Iberian tribes commenced here before our era. Conquered by the Romans, then under the Visigoths rule, the town did not distinguish itself in history for anything special. Only the Muslim invasion of the Iberian Peninsula in 711, changed its ordinary face forever. Decades later, a detachment of the Muslim army from Damascus, who had intervened in the conquest of the Iberian Peninsula, went to Cordoba to claim the loot promised by their participation, but they arrived late, the deal was over. The Caliphate offered them a remote place, located in the foothills of a remote Sierra. The Syrians, having no choice but to agree, could not imagine how they would transform their decision, taken without enthusiasm, in the centuries to come. Al Andalus-a vast Muslim territory on the Iberian Peninsula- was plagued by the constant conflicts of the prominent Arabian families. It caused frequent changes in power in its kingdoms-taifas. In 1013 Granada falls under the rule of the Berber Zirid dynasty and becomes a politically independent territory. This is the beginning of its most remarkable period, culminating in the 250 years of the Nasrid dynasty rule. It was they who built the magnificent Alhambra and in 1492, handed it over to the Spanish Catholic kings Izabela and Ferdinand, claiming to rule back all over the peninsula. 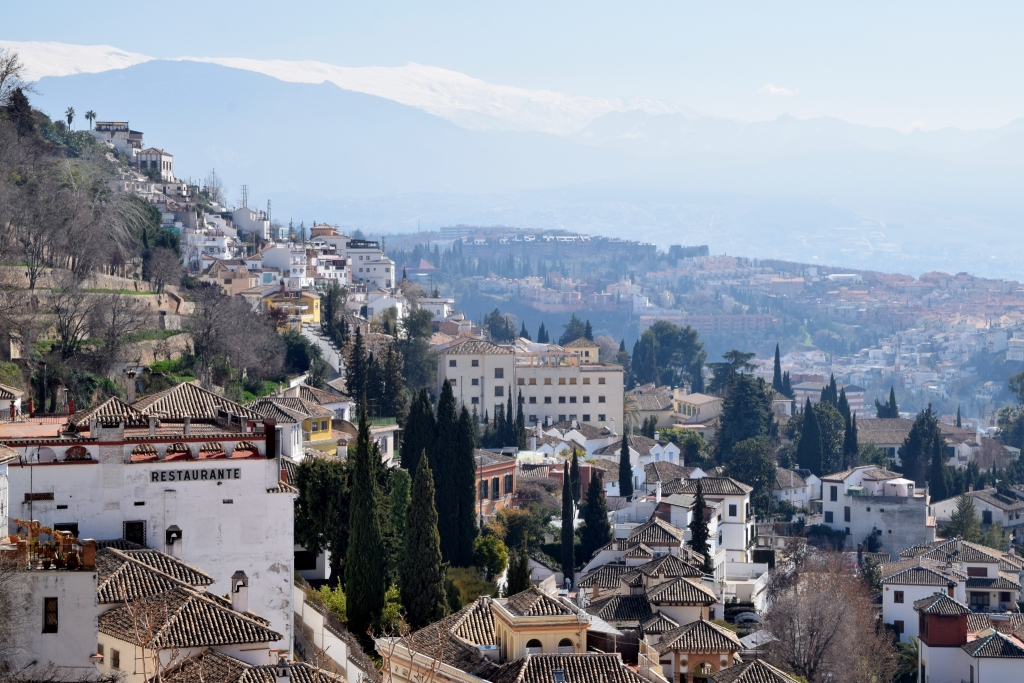 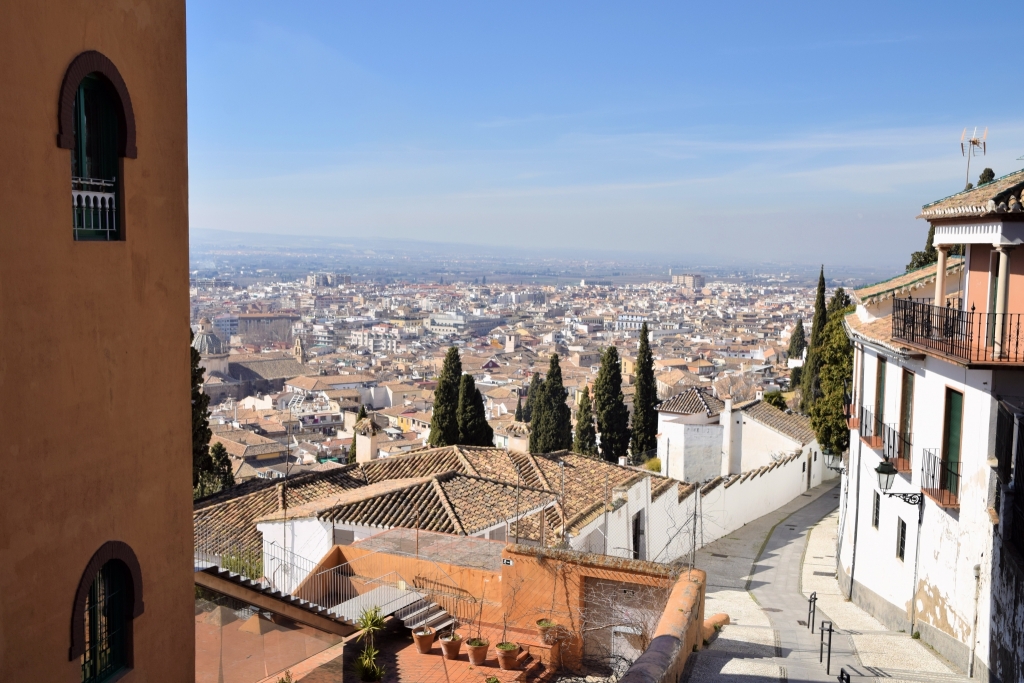 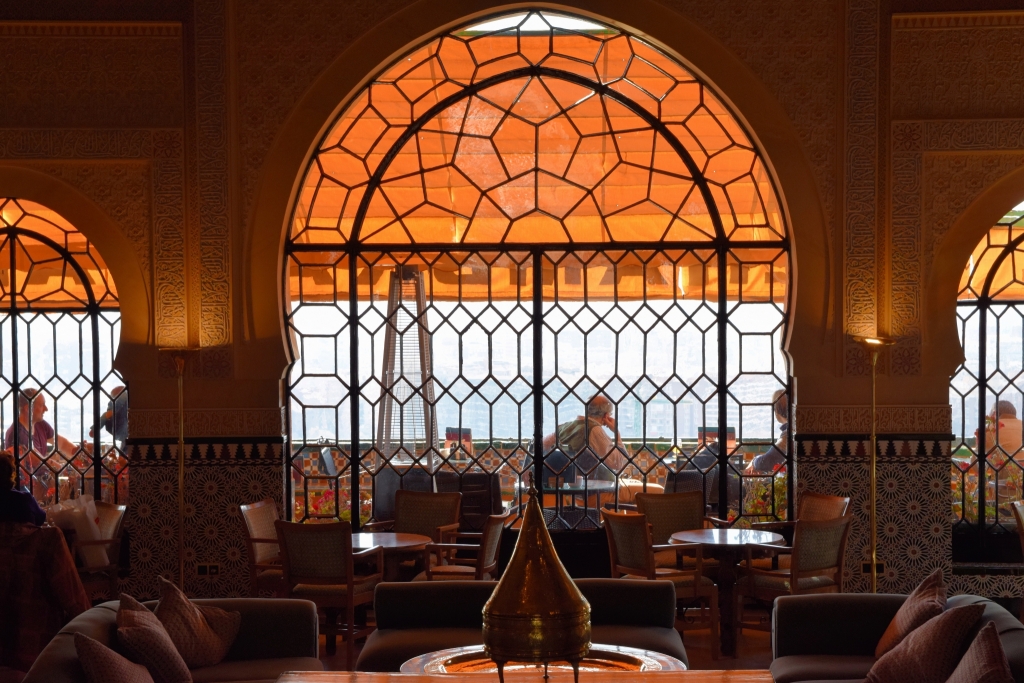 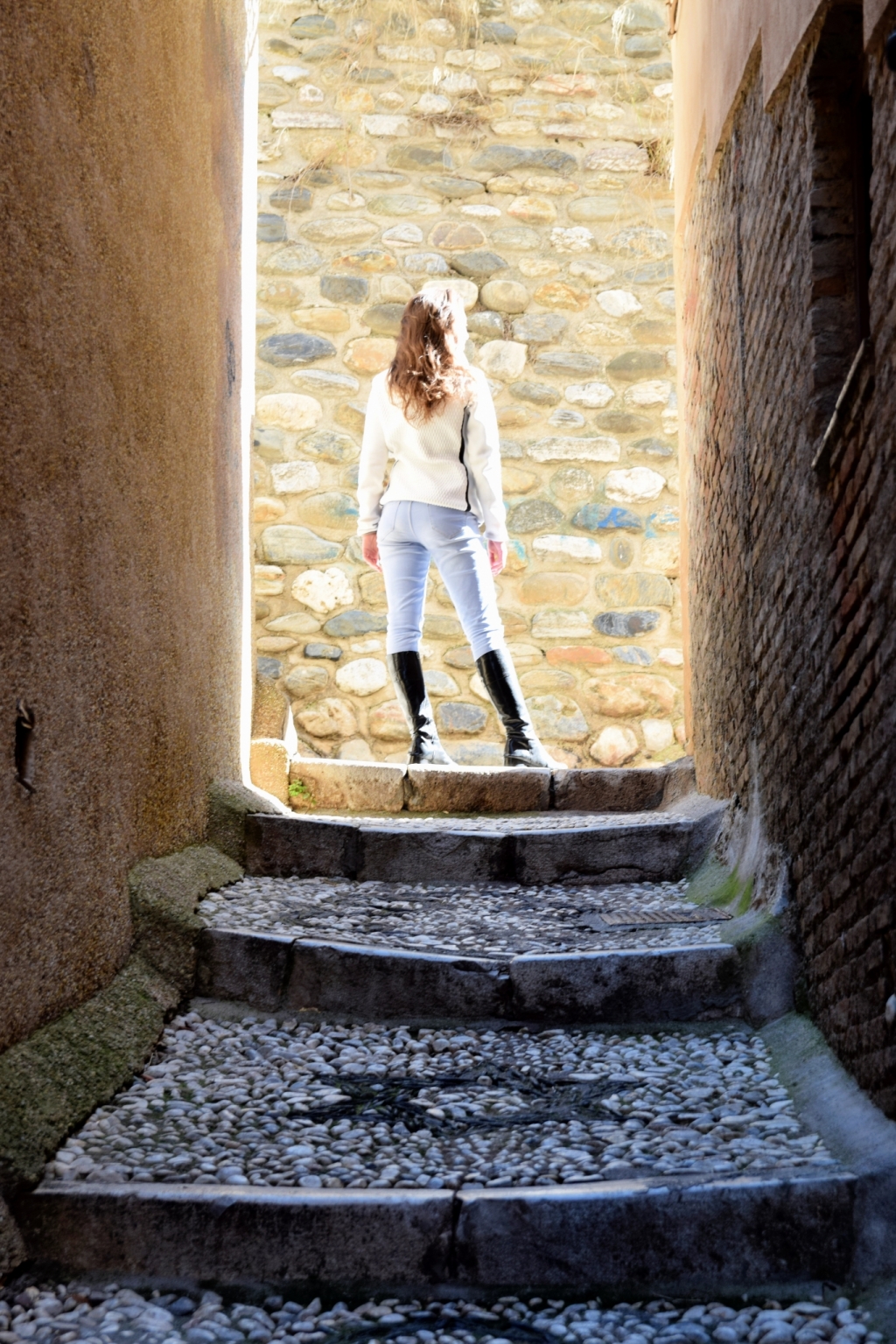 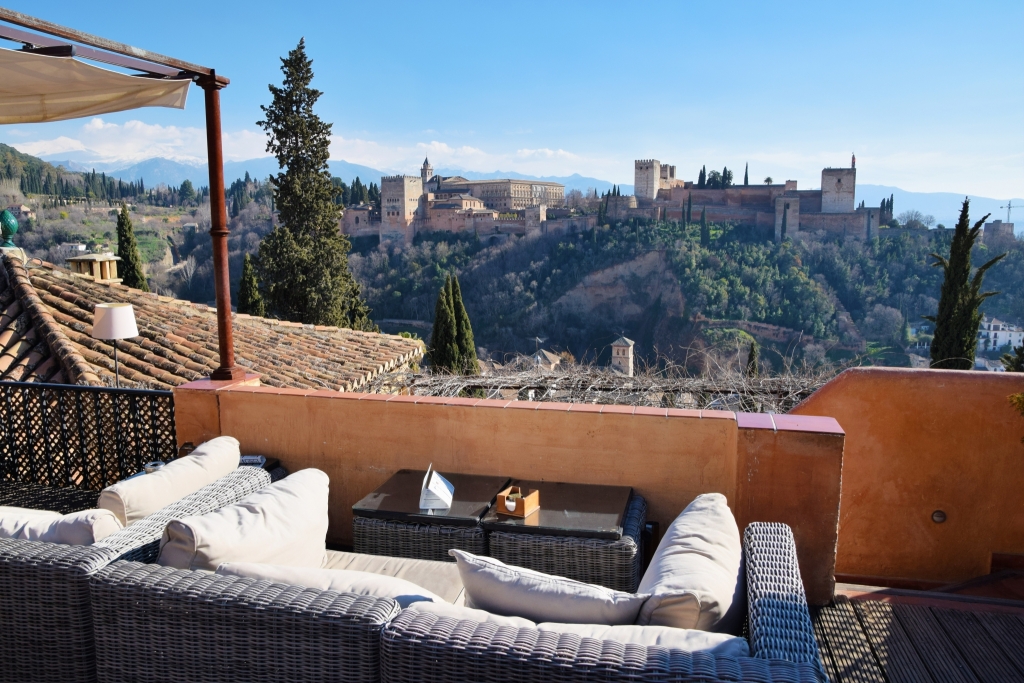 Alhambra is a city within the city.

Entering through the massive walls of the palace, the hustle and bustle of the modern city is left far behind, and inside the castle, time becomes a relative concept. There is everything a city should include: palaces, gardens, cobbled streets, fortresses, defensive walls, and currently also a hotel with a restaurant and shops. The Nasrid Palaces are its most attractive building. It consists of three parts: Mexuar, Palacio de Comares, and Palacio de los Leones. Mexuar, where the tour begins, corresponded to the semi-public part of the palace and was reserved for the settlement of state affairs and justice. The Comares Palace was the official residence of the king. The Palace of Lions was a private area of the palace, where the harem was located. This is the only part of the Alhambra where there is an entry restriction. When you buy the ticket to Alhambra, it will be determined by the time of the entry to the Nasrid Palaces. For example, if your entry is at 2 pm, you should be there a few minutes early and queue to enter the Nasrid building. After crossing the thresholds of the palaces, you can stay there as long as you want, and the whole visit leads you through the entire complex in about an hour. 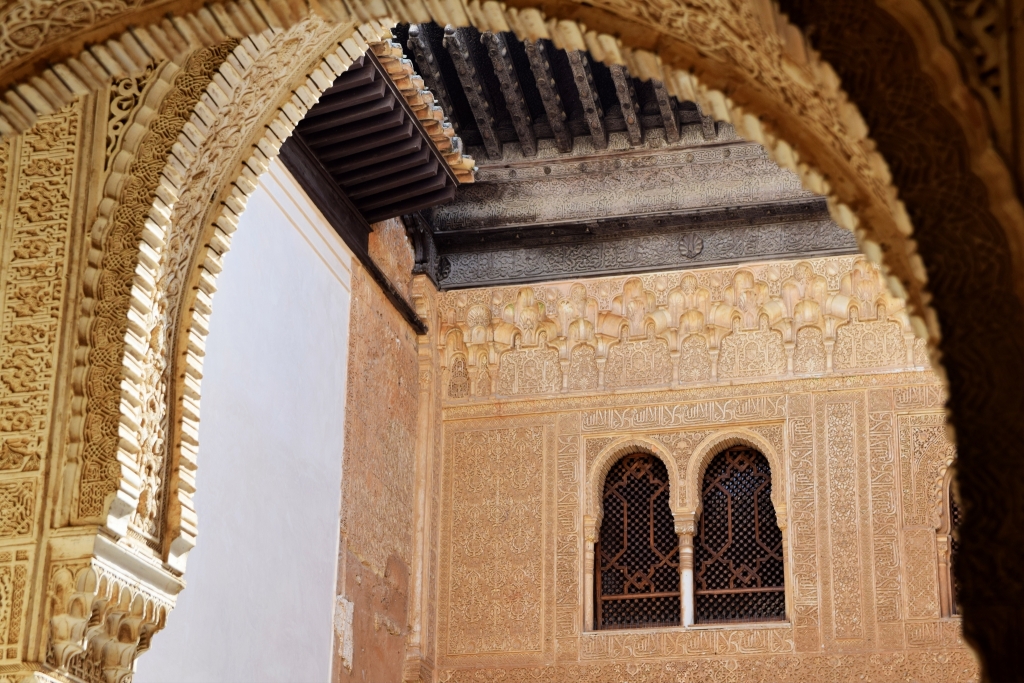 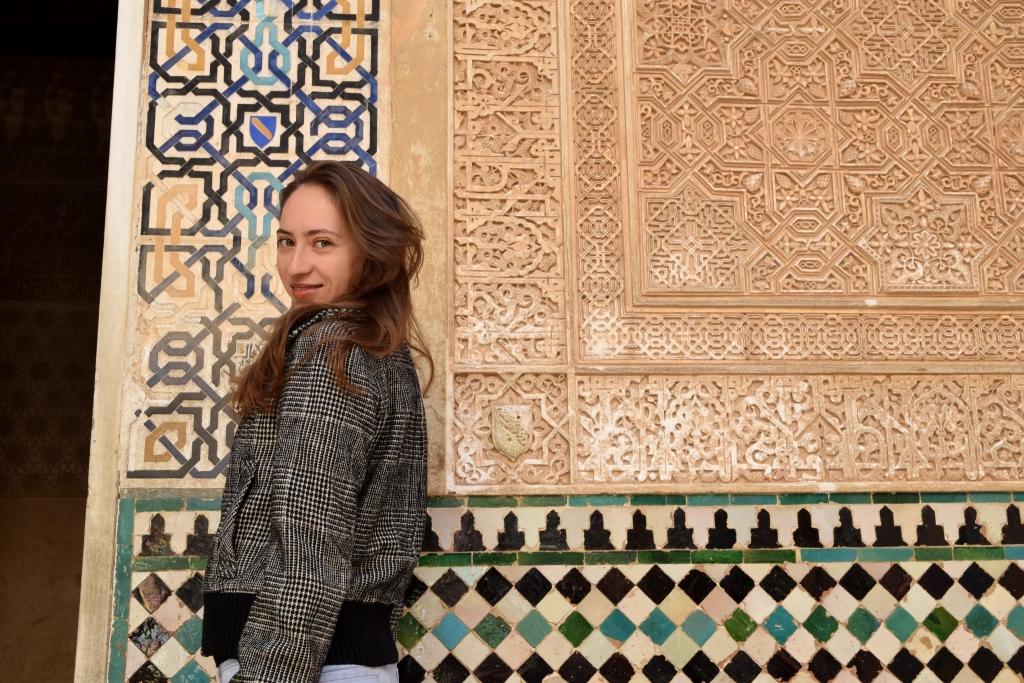 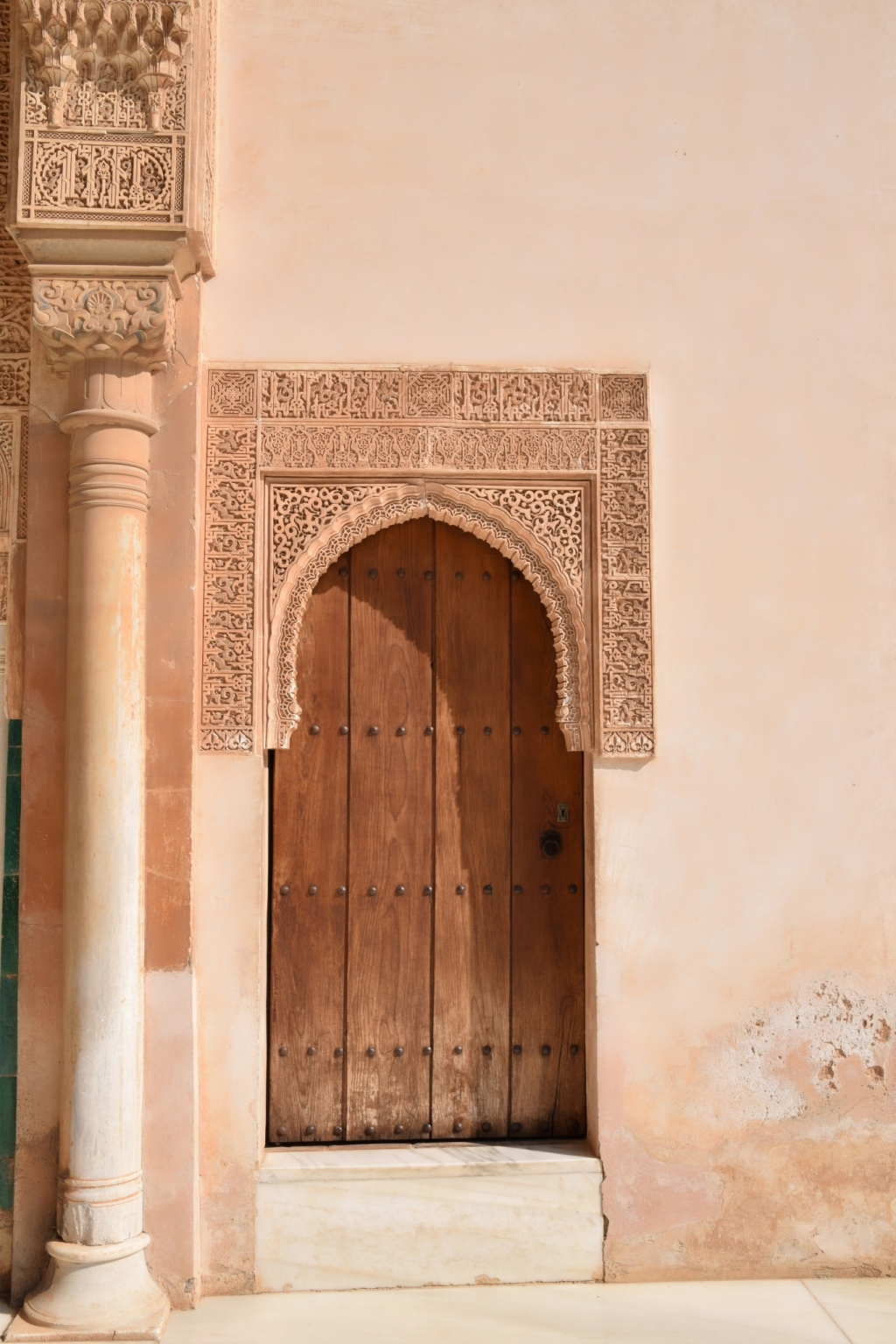 Geometry is the foundation of Arabic art.

The Alhambra was built in the middle of the 13th century. This is a period of the High Middle Ages in Europe. It is also the age of the Medieval Climate Optimum – a time of warm climate in the North Atlantic region, lasting from around 800 to1300 AD. In these warmer temperatures, the population of Europe is growing, the land gives abundant harvests, and trade is flourishing. Numerous crusades to the Holy Land bring to the North of France the knowledge hitherto unknown in Europe, which shows in the brilliance of the great Gothic cathedrals. The Alhambra is created at the same time as the gothic churches. Is this unusual geometry, a knowledge drawn from the sacred symmetry of Arabic philosophy? Sophisticated geometry is the basics of the Alhambra construction, as well as its elaborate decorative elements: arabesques, friezes, plaster motifs, vaults, and patterns. Among them, the mosaics in the Alhambra are the most intriguing. Although they can be identified among artifacts created by people in almost every culture, past or present, no one has designed them and used them with such skill, knowledge, and sophistication as craftsmen and artists working in the Islamic world. The key to understanding this phenomenon is geometry. There are several reasons why geometry has played an essential role in the Islamic world. First of all, geometric shapes, patterns, and configurations provided the desired level of abstraction. Islam is a non-figurative religion, and its theologians have chosen geometry as a medium for transmitting the image of God. Second, geometry was seen as a force capable of uniting secular and religious domains. Finally, the elaborate knowledge of the properties of geometric objects such as circles and lines, and advanced computing skills, have become indispensable for the development of astronomy. Accurate astronomical observations were used to produce almanacs and calendars, to measure time and as a navigation tool (on sea and land, especially on vast deserts). 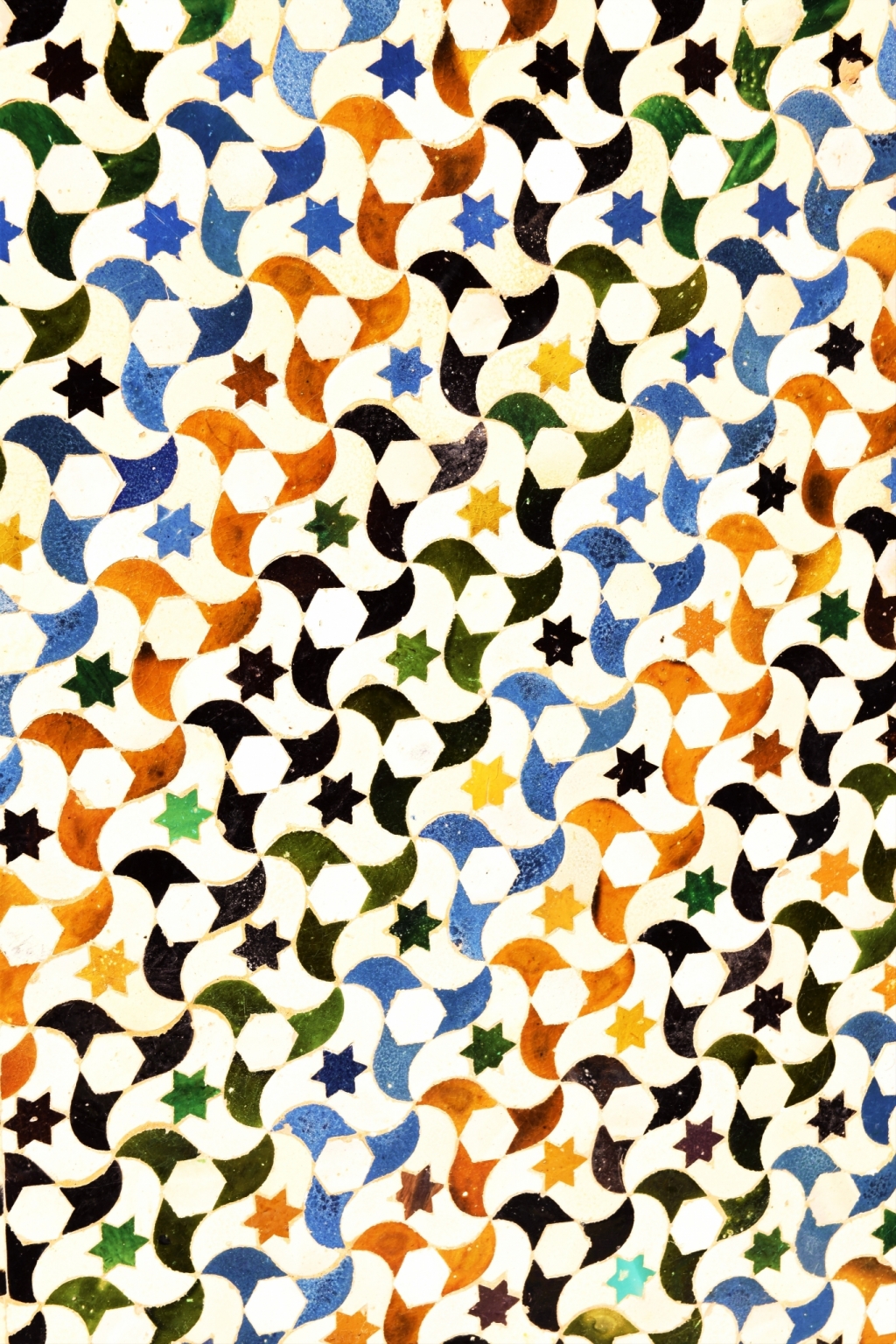 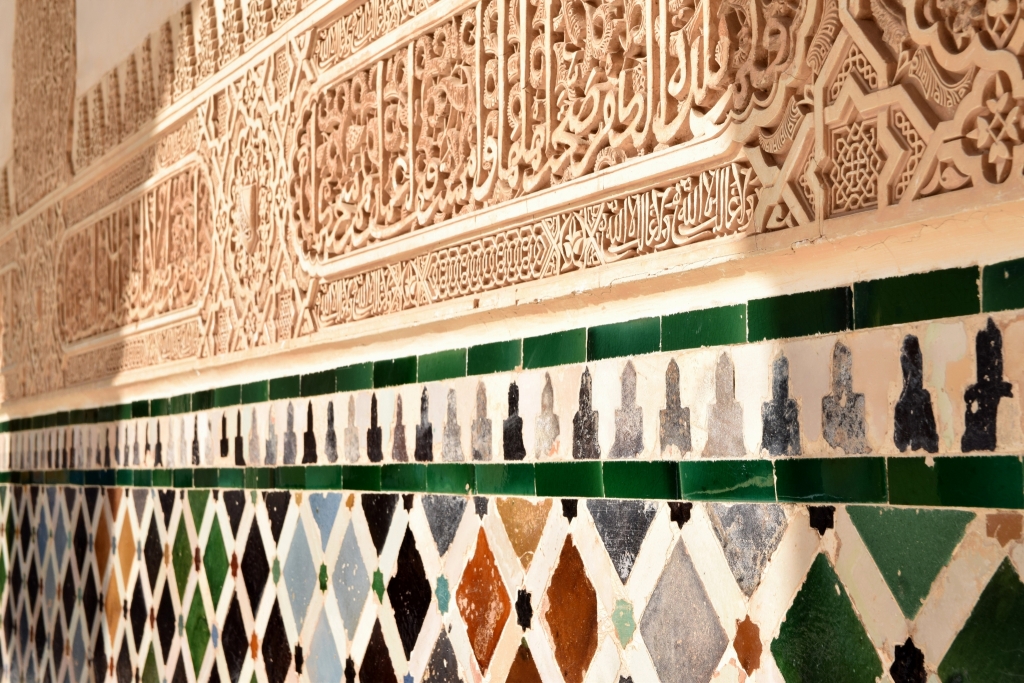 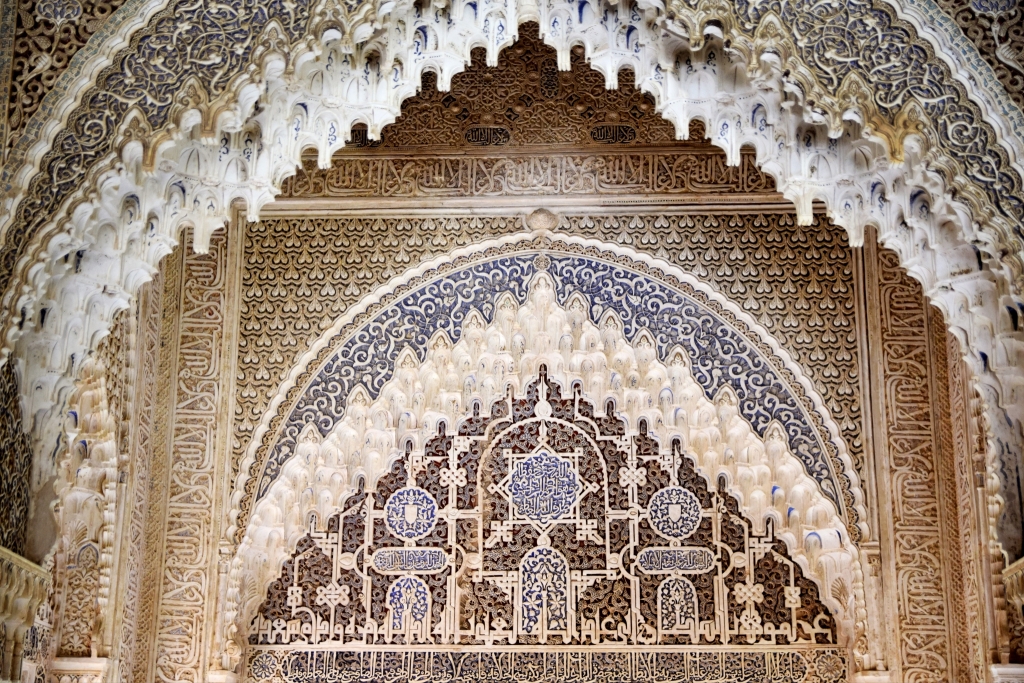 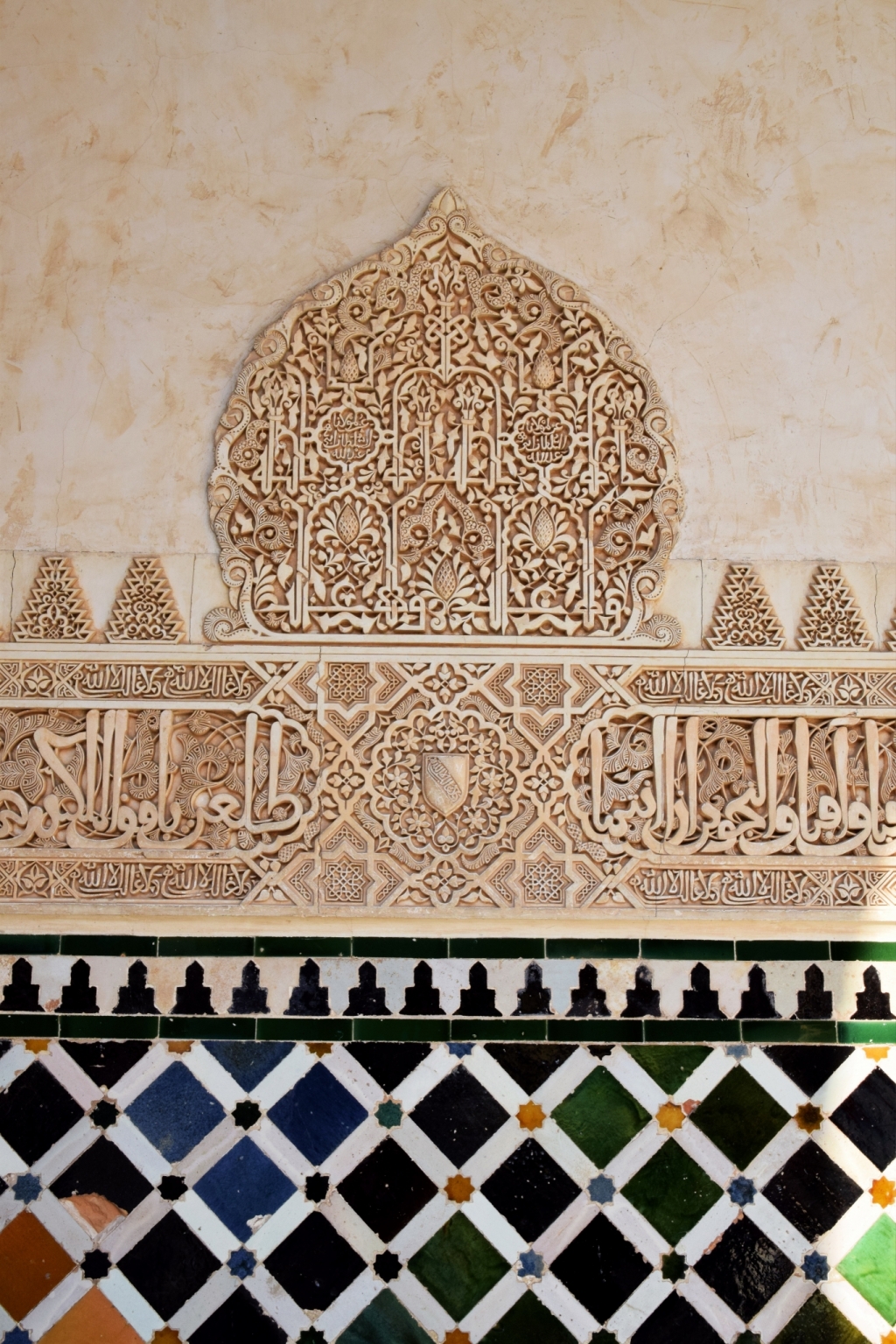 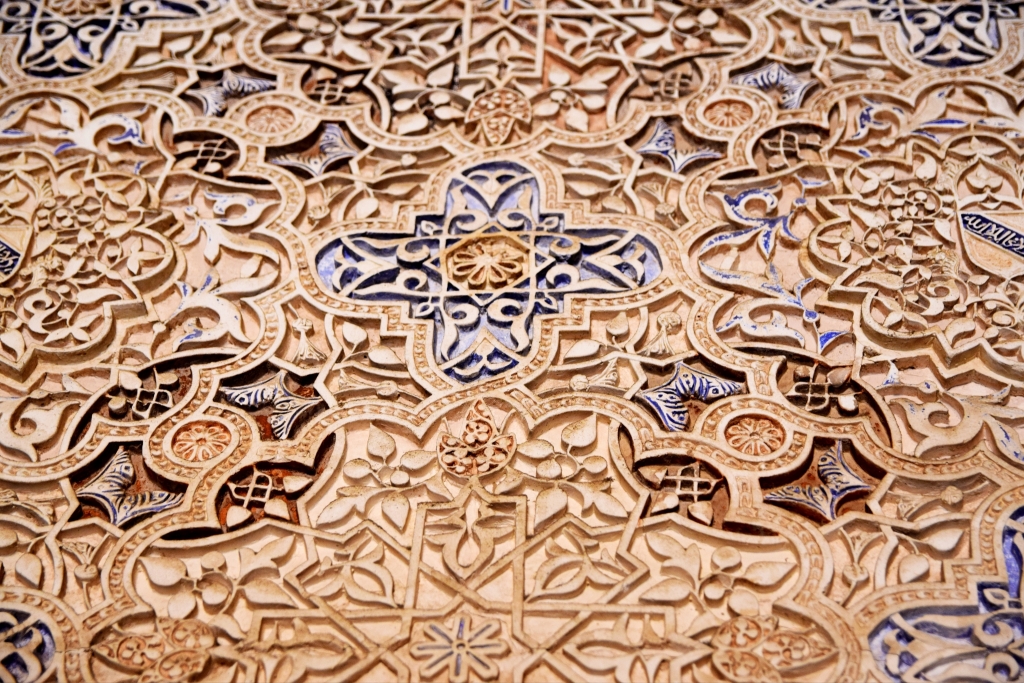 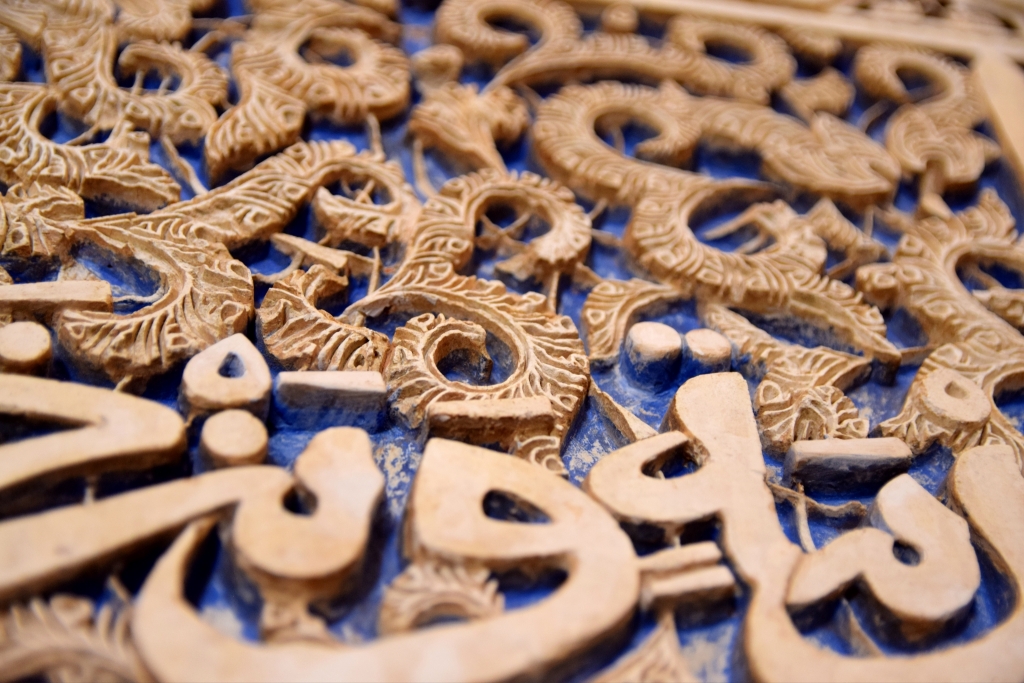 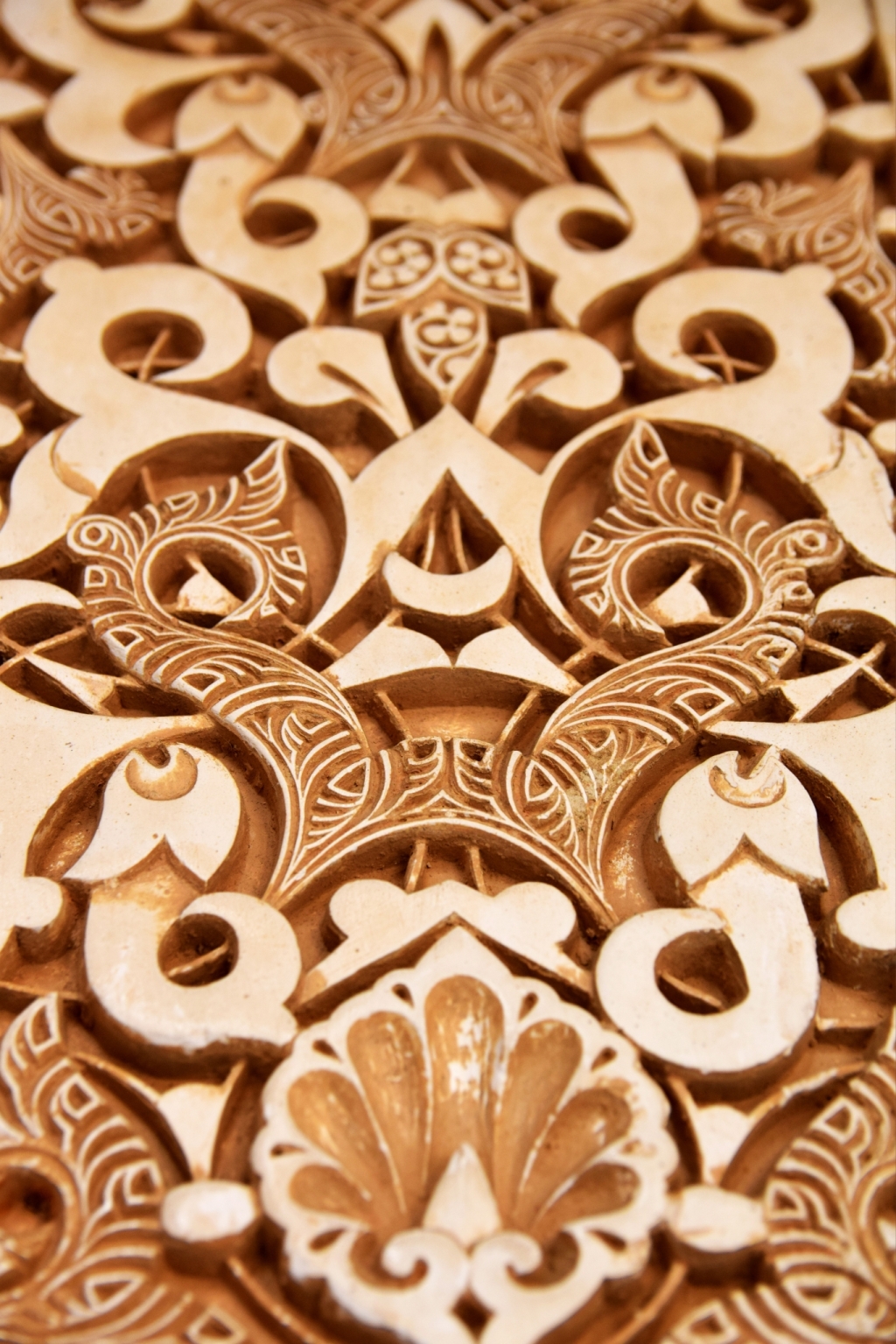 Islam prohibits the artistic interpretation of the animated world.

We will not see human or animal figures in Arab art. Here, above all, complicated geometric elements, but also a foliate ornament and Arabic script in the form of verses from the Koran or poetry prevail. These intricate ornaments, which the Alhambra is famous for, are mostly made of plaster, ceramics, and wood. The selection of materials for decoration is meant to draw the observer’s attention, to the symbolic process of transience and instability over time. Muqarnas – characteristic decoration of vaults, windows, and columns, coming originally from regions of ancient Persia, which resemble the layering of stalactites in caves; the only crystal mosaic preserved in the castle and the wood-carved vault within the courtyard of Patio de los Leones palace, are the artistic culmination of the Arabian Nasrid dynasty. The water element was used for the artistic crowning of the decorations made by man. The still standing surfaces of transparent ponds and intimate fountains are an attempt to marry the material world with the extrasensory one.  They are supposed to reflect the image of the world and the universe, often invisible to our eyes. Water in Arabic culture is the equivalent of the purification process. Water ponds and Arabic fountains, often with the motif of four water channels departing from the center, symbolize four holy rivers: the Euphrates, the Tiger, the Nile, and the Amu Darya. They flow as the Quran says, in the first of seven paradises according to Arab beliefs. There is no shortage of secrets in the Alhambra. Sculptures of lions on Patio de Los Leones have inscriptions referring to Jewish traditions and Solomon’s temple in Jerusalem. The building itself is a solar clock, constructed in such a way that the sun would illuminate the rooms according to the time of day. The entire Alhambra is a subtle world of symbols, metaphysics, and transience. Sturdy and heavily built from the outside, hides in its interior a refined world of past eras, delicate and yet lasting until today. 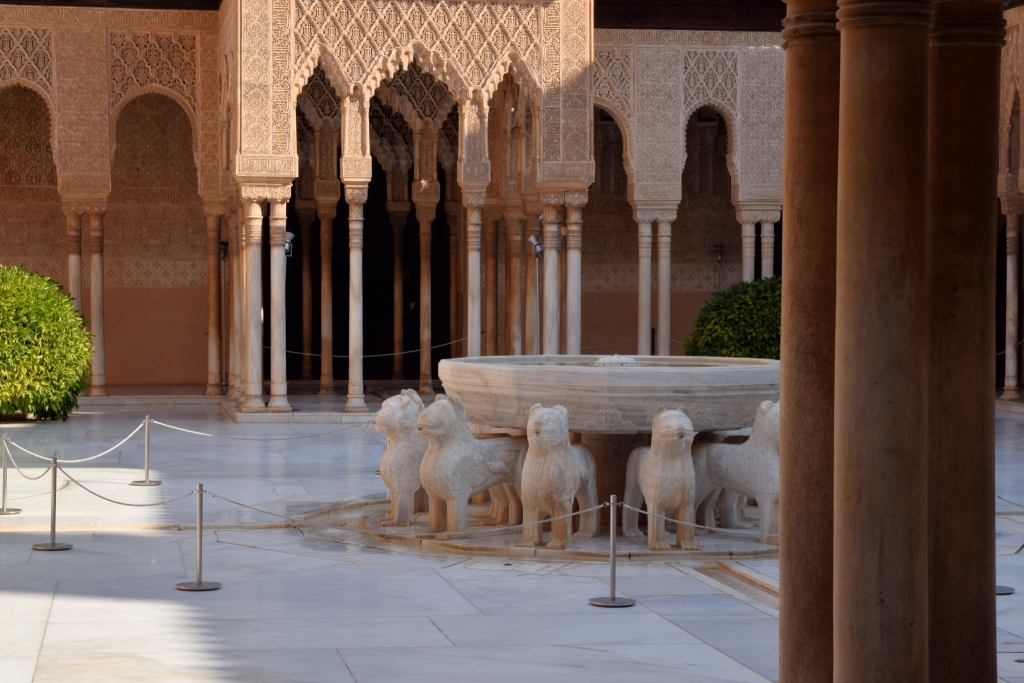 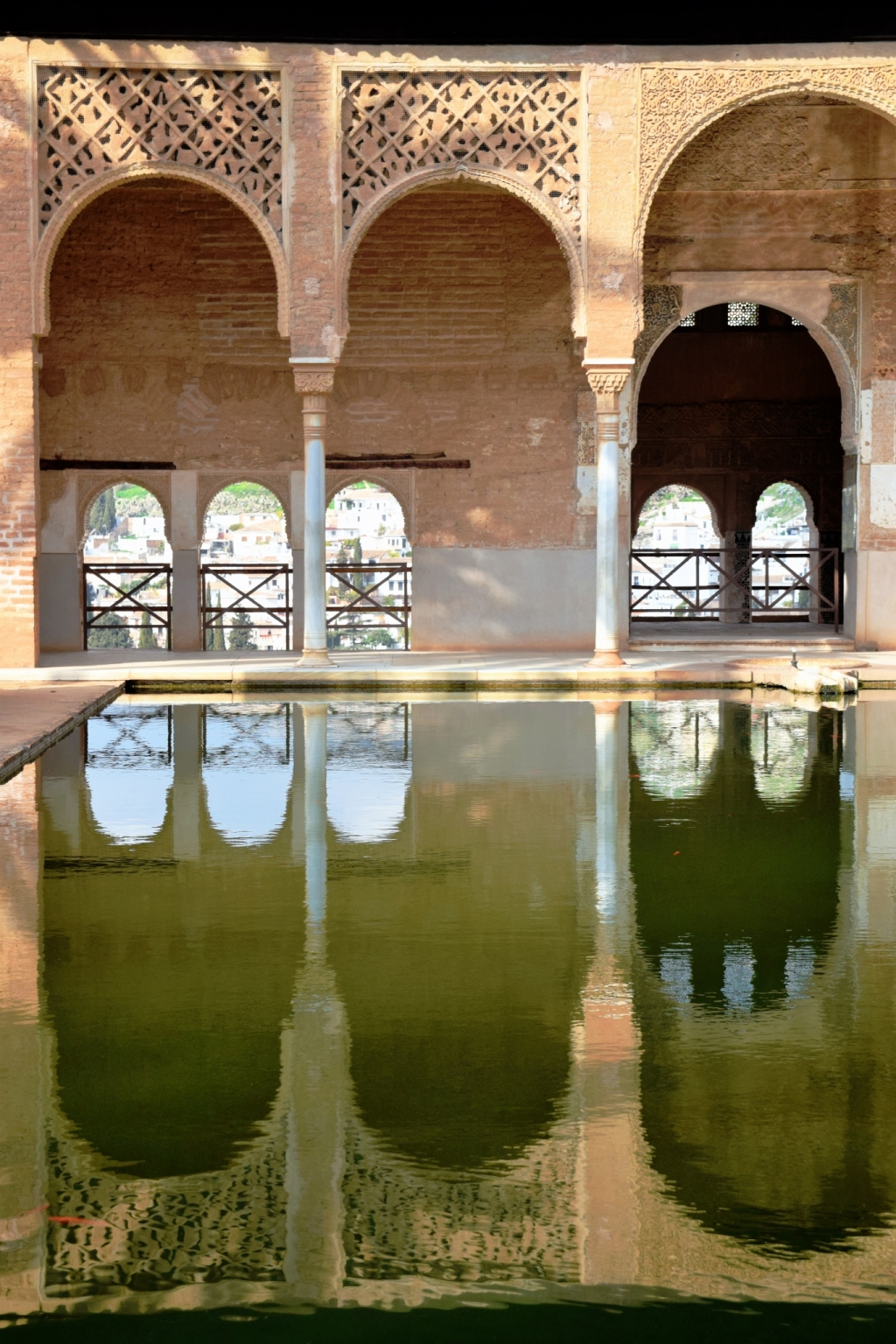 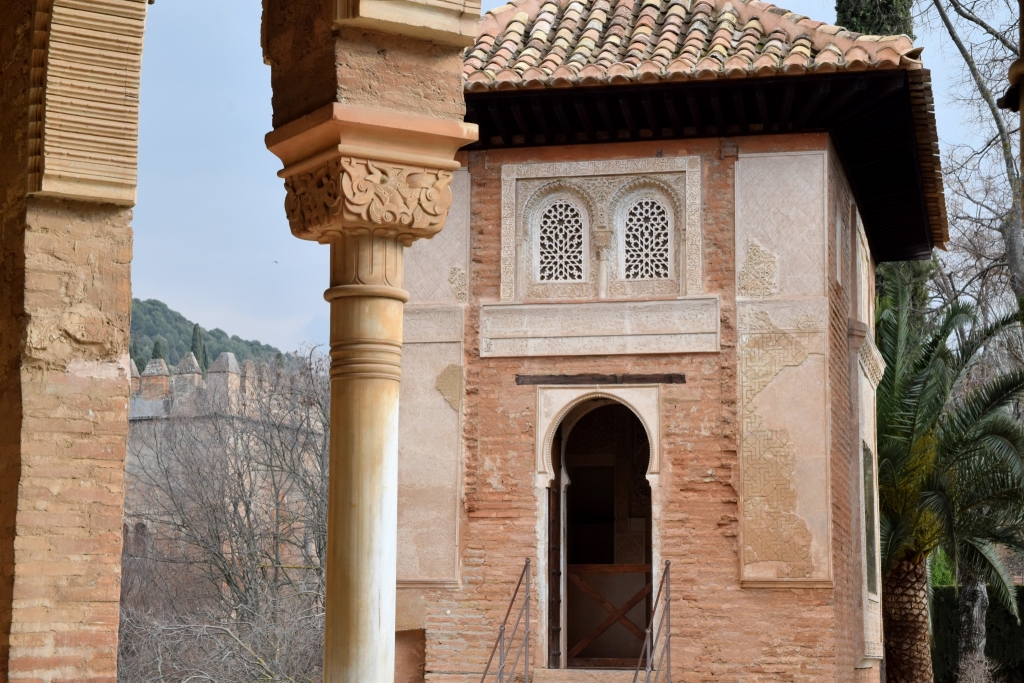 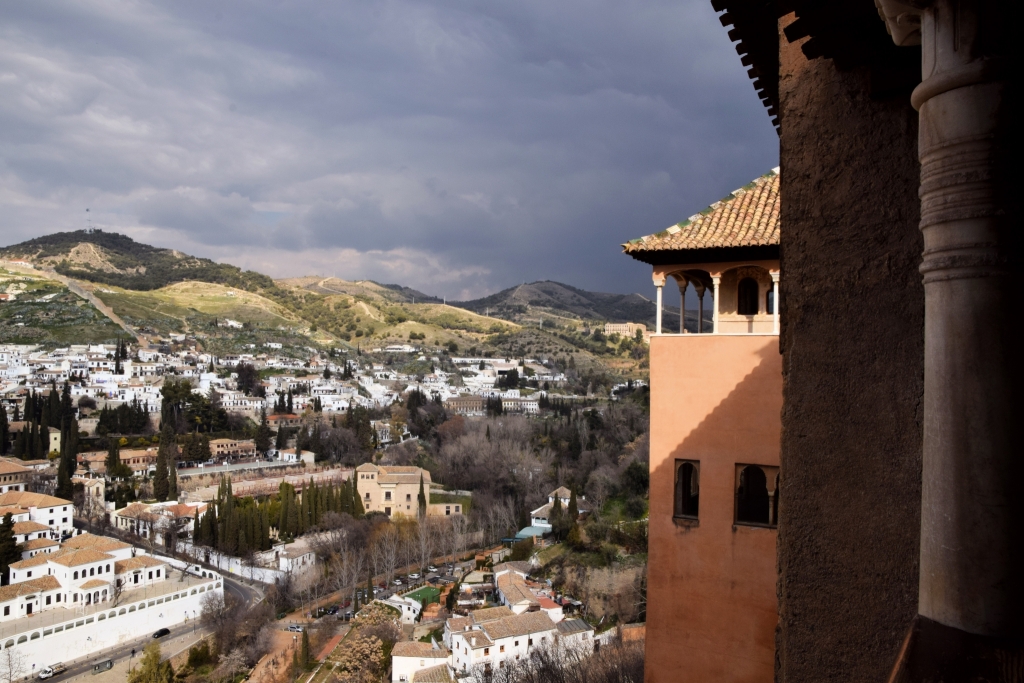 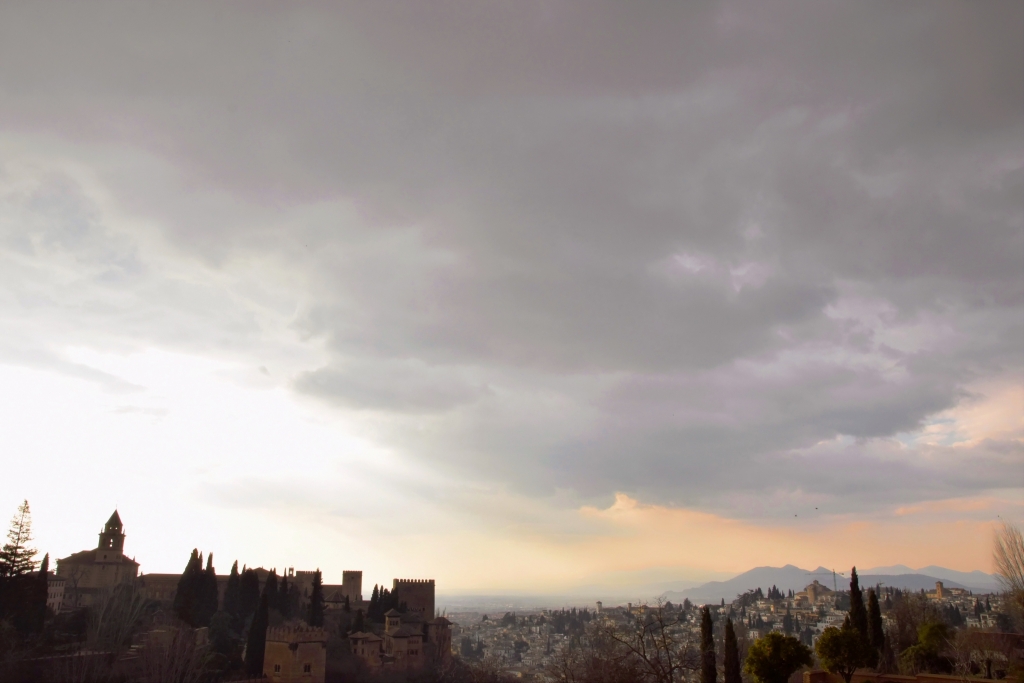 Why is the Alhambra so extraordinary?

The enormity of the complex as well as the degree of preservation of its elements is a unique phenomenon in Europe. The compilation of meteorological conditions and historical events caused slight damage to the object over time. The war of independence between Spain and France was a period in the history of Spain, where the most significant destruction of its artistic heritage occurred. Despite many thefts made by the French army, the generals stationed at the Alhambra appreciated the value of the place and took care of it. The French military rebuilt many dilapidated buildings inside the complex, nurturing its vast gardens better than the Spaniards themselves a few centuries earlier. After losing, French troops accompanied their retreat with many explosions. One of them was aimed towards the Nasrid Palaces. If it were not for a disabled soldier, José García, who heroically threw himself towards the hot wick of the projectile, extinguishing it with his own body, today none of the sweet delights of the beautiful art of the Nasrid dynasty, would be left. A thanksgiving plaque is displayed to the hero, which can be admired in the palace itself today. Protection of the monument after the change of power from French to Spanish resulted in renovation works and reconstruction of many destroyed buildings. Today, all parts of the Alhambra are carefully taken care of, allowing you to travel easily with your imagination, to the times when the Arabs ruled the Iberian Peninsula. Alhambra is a magical journey, to the beginnings of what has been forgotten, to Arab art full of mystical symbolism, which became an inspiration of artists from the peninsula and to the world outside. The Alhambra is one of the many pieces to the puzzle, necessary to understand contemporary Spain. Spain, which was once an Arab kingdom.