Fes is one of the oldest and best-preserved cities in the Arab world.

The third largest city in Morocco is inhabited by craftsmen, merchants, and scholars. It is a royal (there’s a royal palace in it), educated and extremely commercial city. Due to the influence of Al-Karaouine-the oldest functioning university in the world and the rich history of the region, Fez today represents the cultural and religious capital of traditional Morocco. 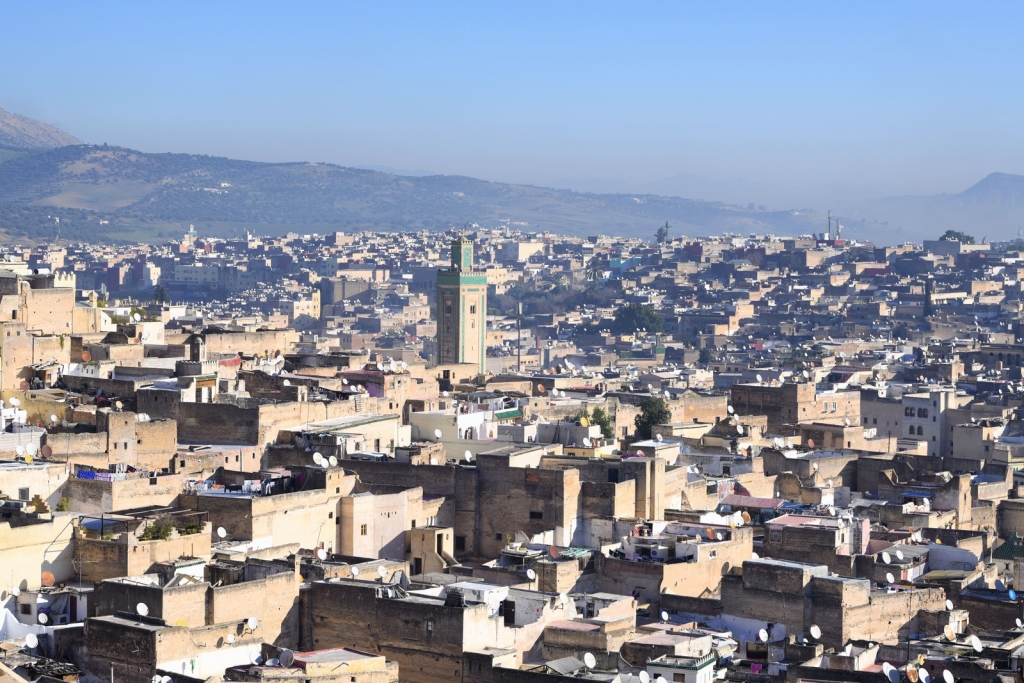 Fez is like an Arab woman covered by a veil. You will discover her true face only when you gain her trust, and for that you need time, specific knowledge and … language.

I travelled to Fez for the first time as a student. The multitude of experiences, the colourfulness of the local life and the dynamism of the Arab world left a colourful memory in my head and a warm feeling in my heart. After 10 years I decided to visit Morocco again and only the second time, Fez made a huge impression on me. Knowing the area from before, the second time I focused on discovering details and talking with people. Morocco, vividly remembering the recent French occupation, communicates in Arabic and French language. French was my key, thanks to which I could communicate with the local community and understand its culture much better. 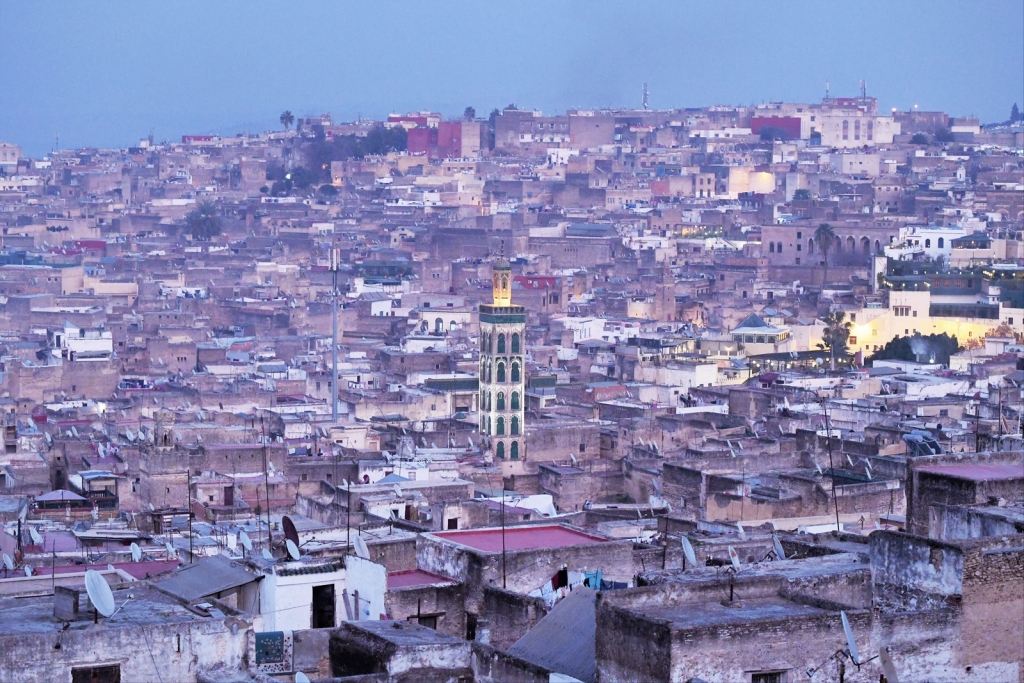 The Medina of Fez is inscribed on the UNESCO World Heritage List.

The medina of Fez is considered one of the most extensive and best-preserved historic cities of the Arab-Muslim world. Unpaved urban space retains most of its original functions and attributes. It represents not only outstanding architectural, archaeological and urban heritage, but also continues a lifestyle, skills, and culture that are unchanged, despite the evolution of modern societies.

It is the world’s largest urban area without cars! 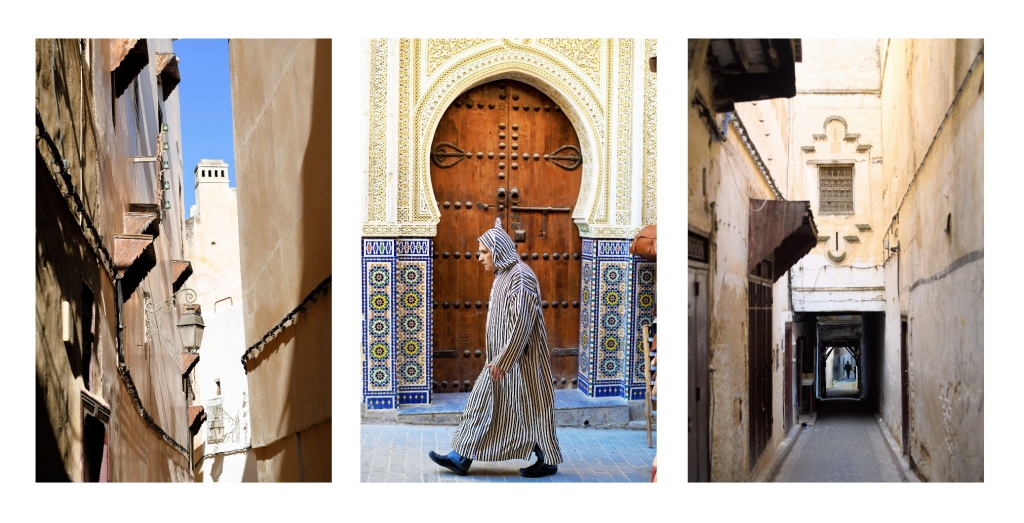 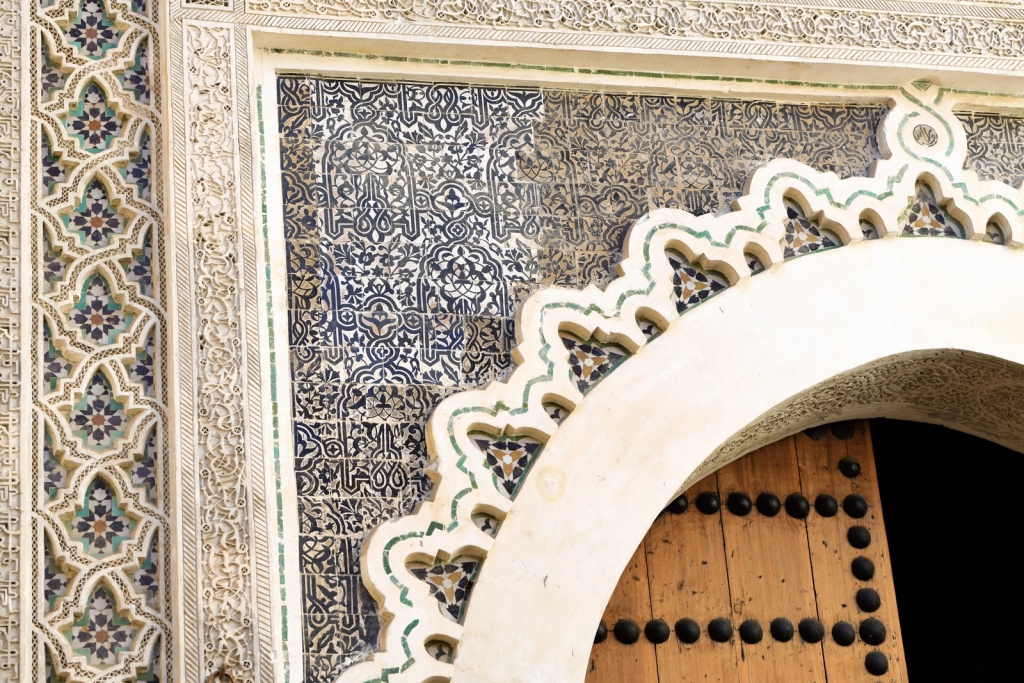 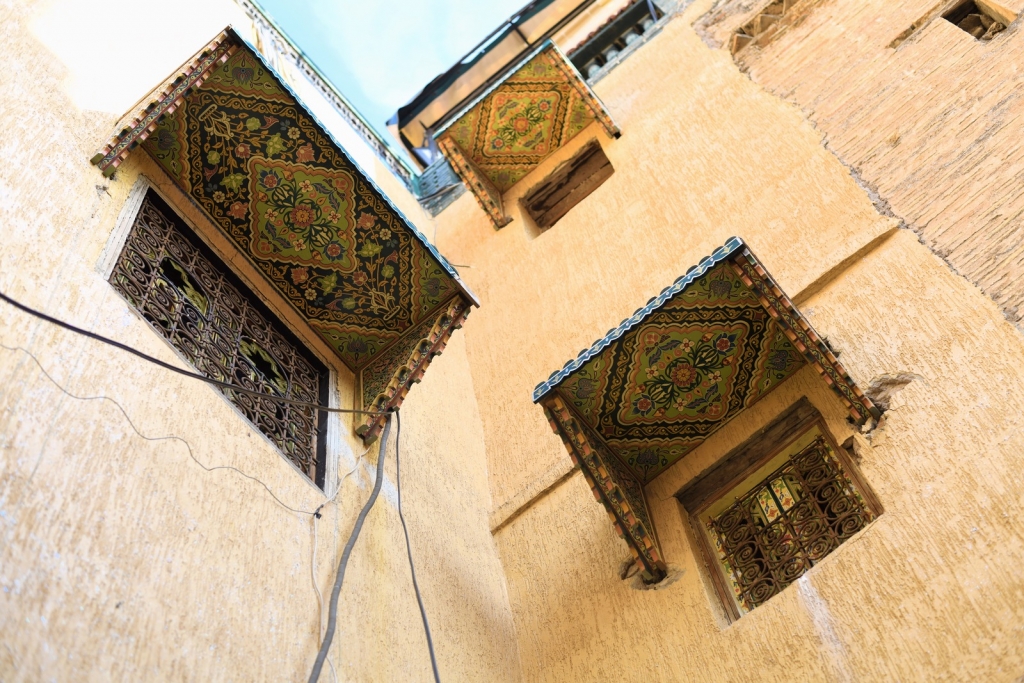 Old Fez (Fez El Bali) – Medina, is the oldest historical part of the city, where Arabic souks, mosques, and Koranic schools are located.

New Medina (Fez el Jdid)- built between the Medina and the new city, has much of the character of a typical Arab city, but there is more free space in it. Here are: the royal palace, Jnan Sbil gardens and the Jewish quarter.

New Town – built during the French protectorate, is a modern part of the city. Its landscape is filled with new generation buildings, large stores, banks and hotels. 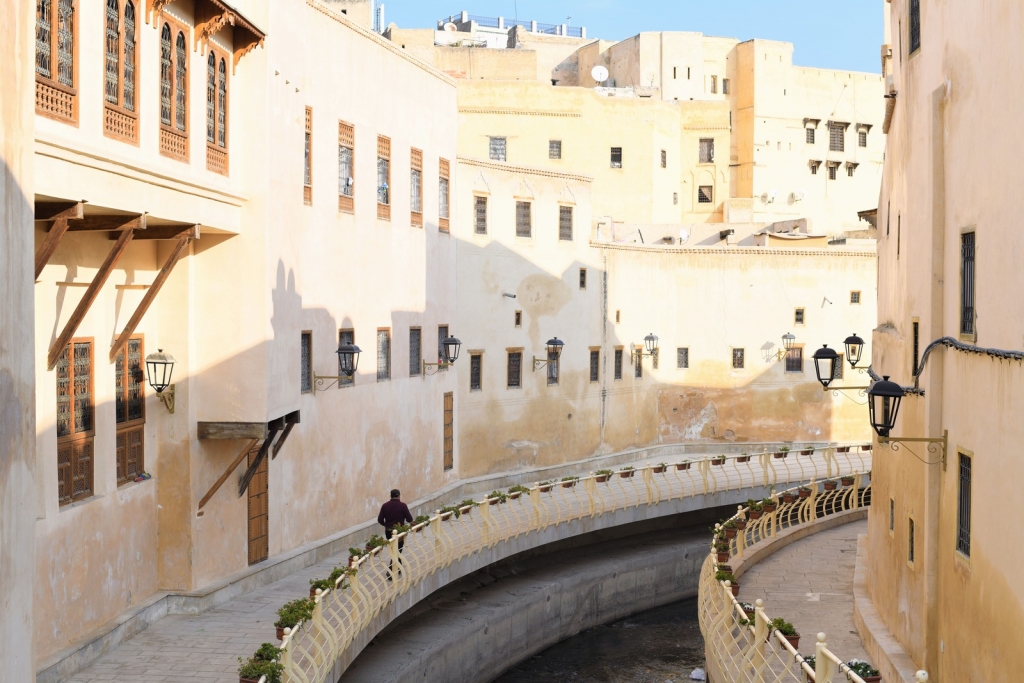 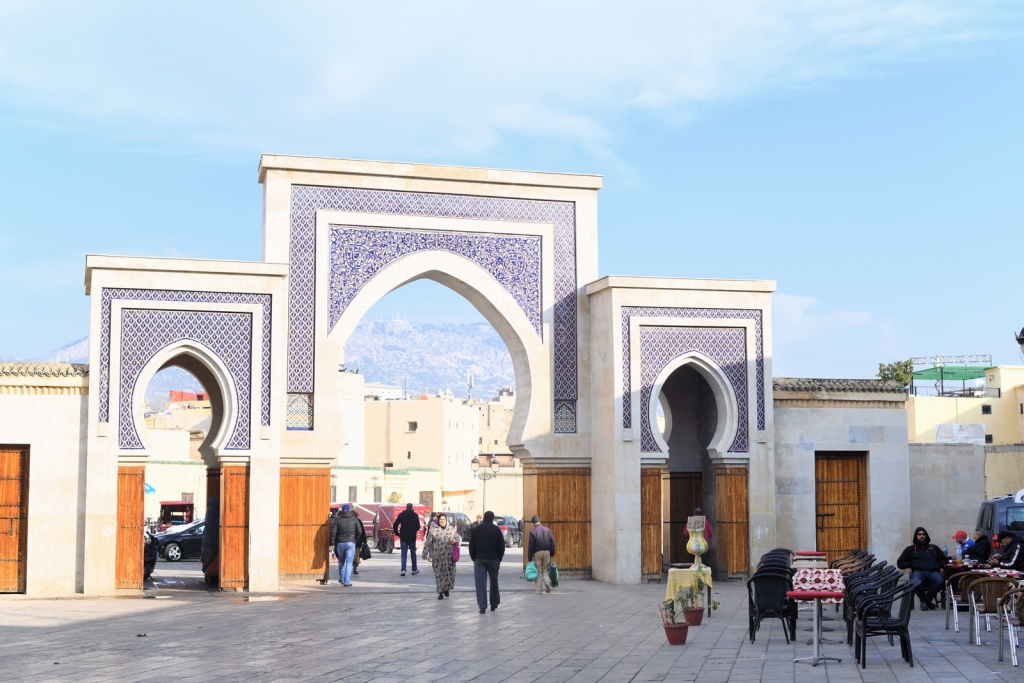 The old town is located on wavy, hilly terrain, and its heart is in a valley. From the north and south, it is surrounded by hills, from which you can see the old town and mountainous areas around the city. In distant times, defensive fortifications were built on them for observation and defense, and their ruins still stand today. A trip to one of the hills provides views that are necessary to understand Medina’s anatomy.

The northern facade is definitely more attractive than the southern one.

Spatially it is a large area, great for walks. You can visit here the Weapon Museum, Bab Guissa Arab cemetery and the ruins of monumental tombs of the Marinid dynasty. After that, I advise you to go to the Les Meridiens hotel, whose terrace is a charming place, ideal for an aperitif, while admiring the beautiful panorama of the city. 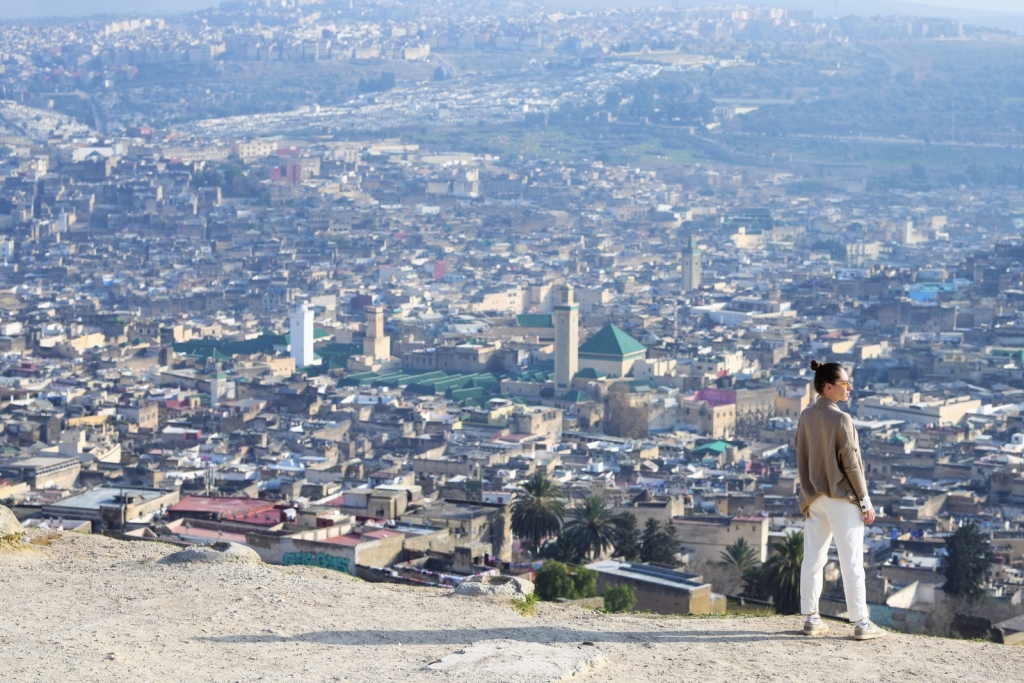 The old city of Fez is surrounded by defensive walls. The only entry points to it, are the gates – Bab –. The degree of their sophistication and decorations, give us a lot of clues about what or who is hidden behind them. In the labyrinth medina, where all the houses look similar on the outside, suggesting the popular saying:

“The Moorish house is made of mud and the inside of gold”,

we can expect many breath-taking surprises, after crossing its gates. 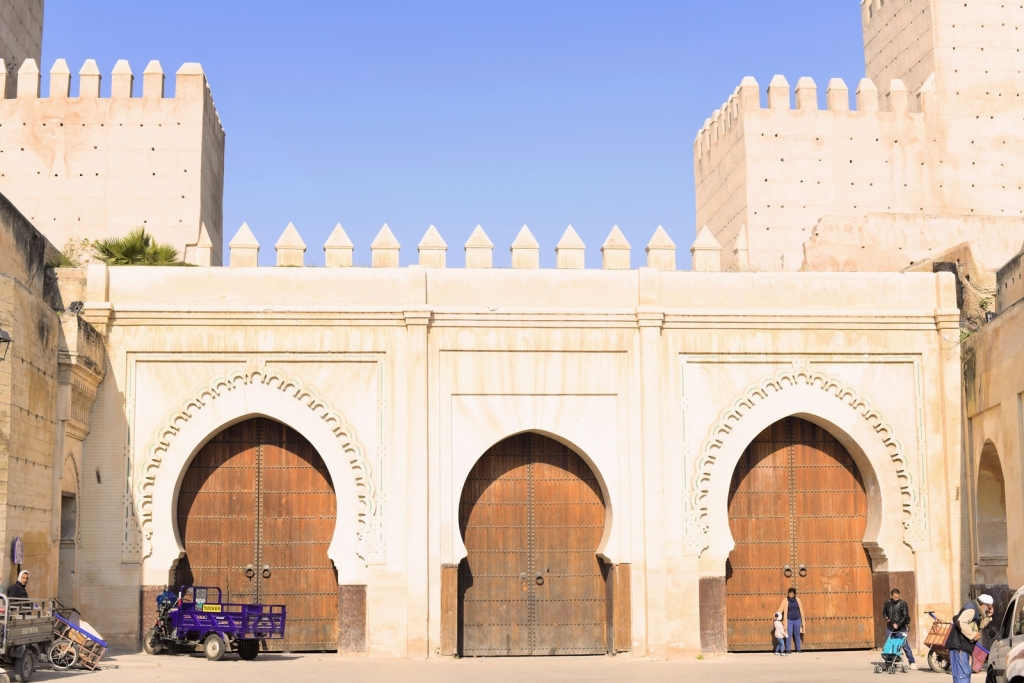 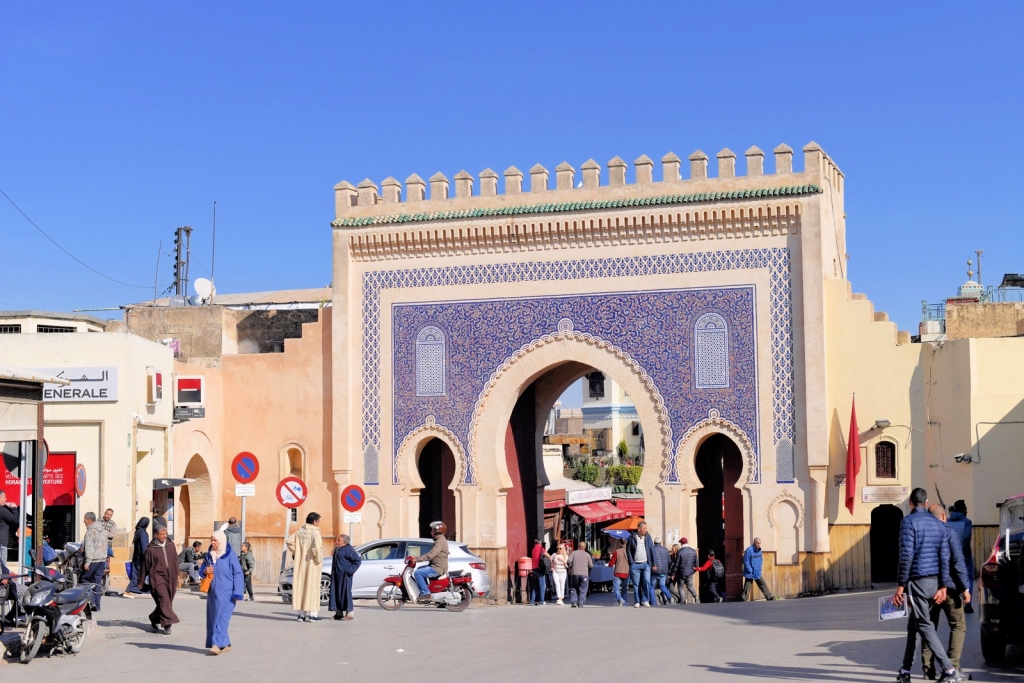 It’s a real world of contrasts.

It has beauty and ugliness in it, art and disorder, nice urban spaces, interspersed with places with incredible dirt on the streets. People with an exotic appearance, dressed in colorful caftans, constantly tormenting you for conversation or money. Calm, religious places are squeezed into narrow streets, filled with people who seemingly, are blindingly heading somewhere in a hurry. This anarchy of Muslim urban life, in contrast to the rationality of Western cities, is sometimes hard to bear. 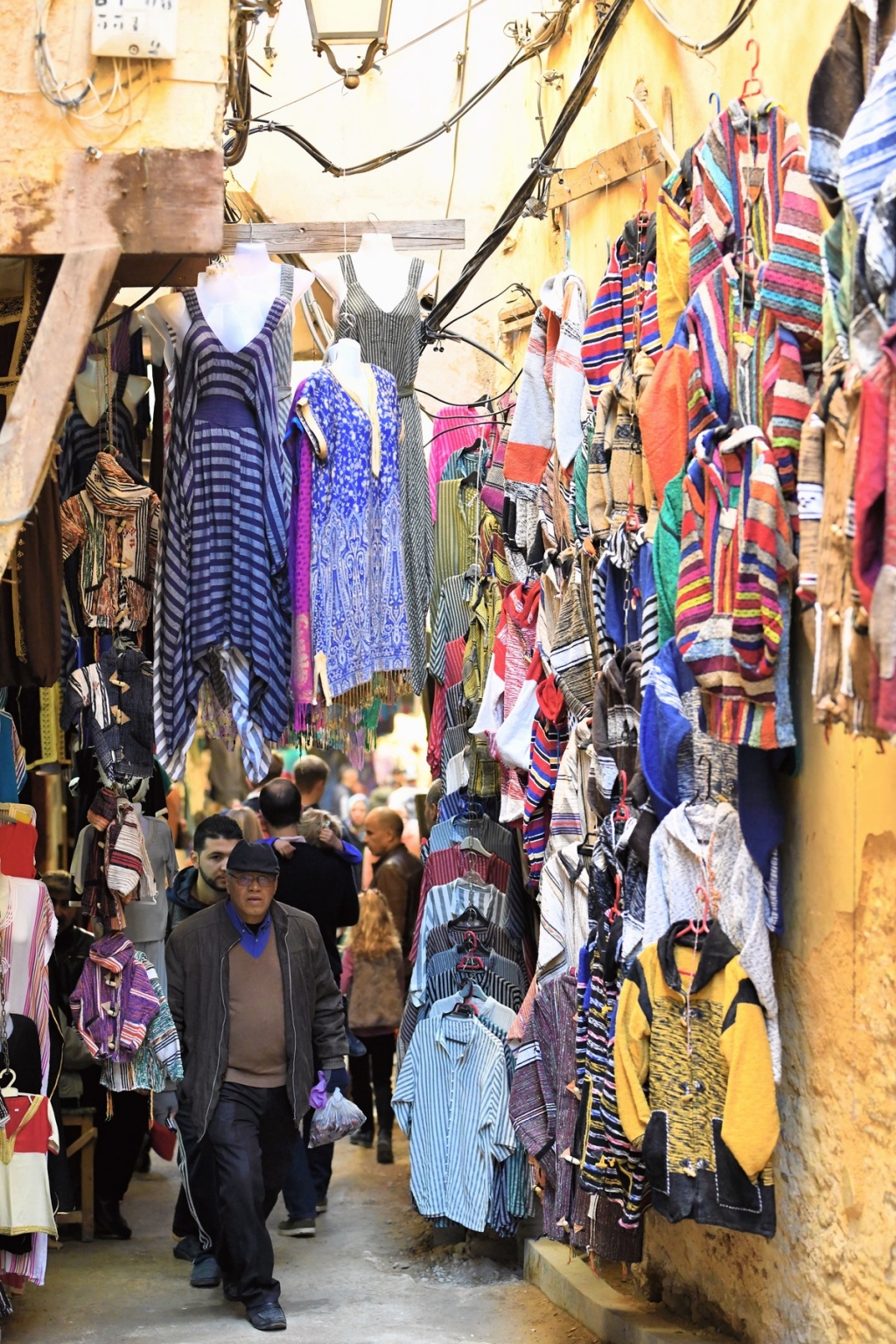 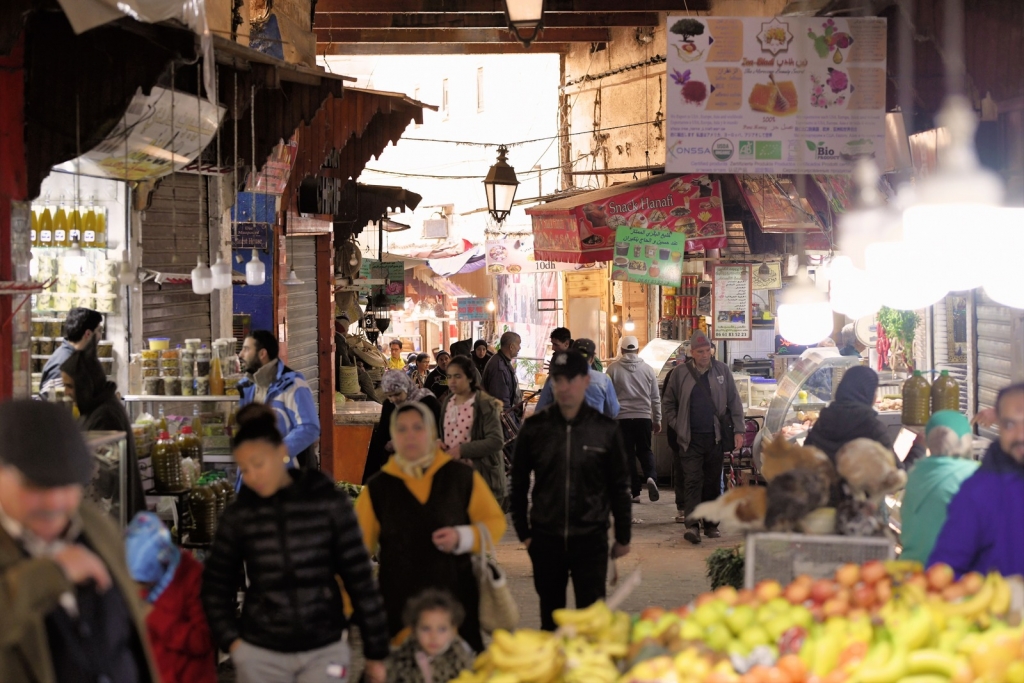 The Arab world wakes up and goes to sleep early. Life in the city begins around 7 am and ends before 8 pm. Those who remain on the streets after dark, do not necessarily belong to respected city citizens. As a tourist, it is better not to go out after sunset.

Moroccans are extremely pushy towards tourists.

Starting a conversation with them often ends with asking for money, or offering a product from their store. They seem friendly to us, but I have the impression that they only see us, as a moving sack of gold. Minor scams are commonplace. Humbly accepting the aforementioned, will save us time for sightseeing and we will avoid unpleasant quarrels, with the waiter or taxi driver for 30 dirhams, which he added to the previously agreed price. In order not to lose too much energy on street jostling, don’t fall for the seemingly offered help, questions about where you come from, or encouraging statements “welcome to Morocco”.

It cost me a lot to take spontaneous photos of people, because of resentment and admonition. It worked best to offer money in exchange for taking photographs. 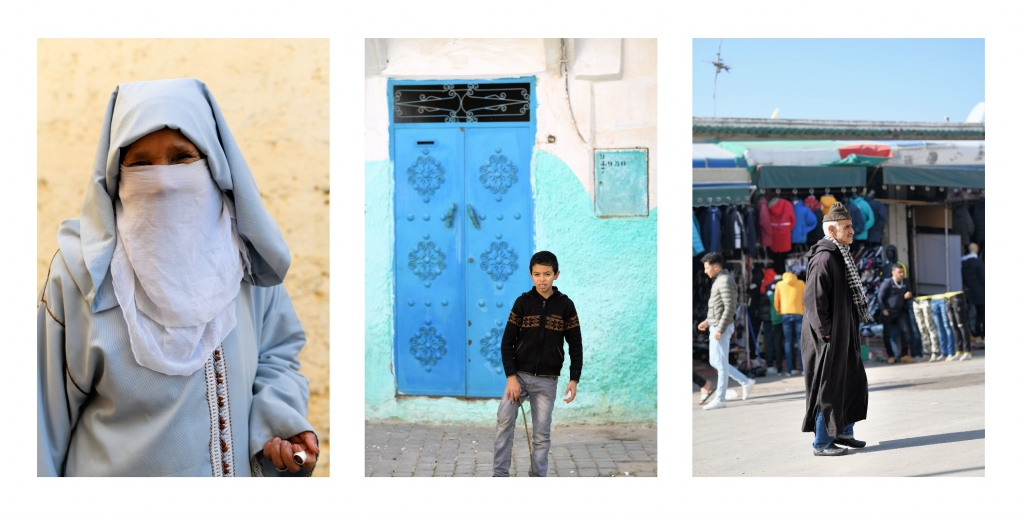 Moroccan food is one of the best in the world, there is only one problem – frequent lack of hygiene. Finding a clean restaurant should be the most important task in the culinary exploration of the country. Moroccan products are natural and without preservatives. Unpasteurized dairy products, fruits, and vegetables, without artificial fertilizers, cause that the taste of dishes is more pronounced than the one we are used to, e.g. in Europe, but it can cause digestive revolutions for unused stomachs. Omnipresent mint tea in Moroccan culture is a preventive measure for any indigestion and I recommend using it. The quality of water in Morocco, due to the desert terrain, is not good, therefore tourists are advised to drink bottled water. 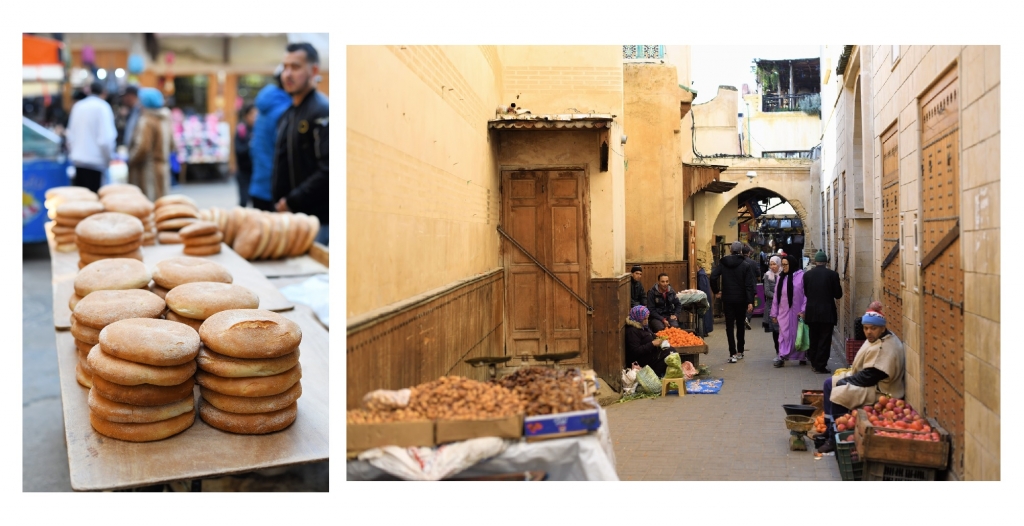 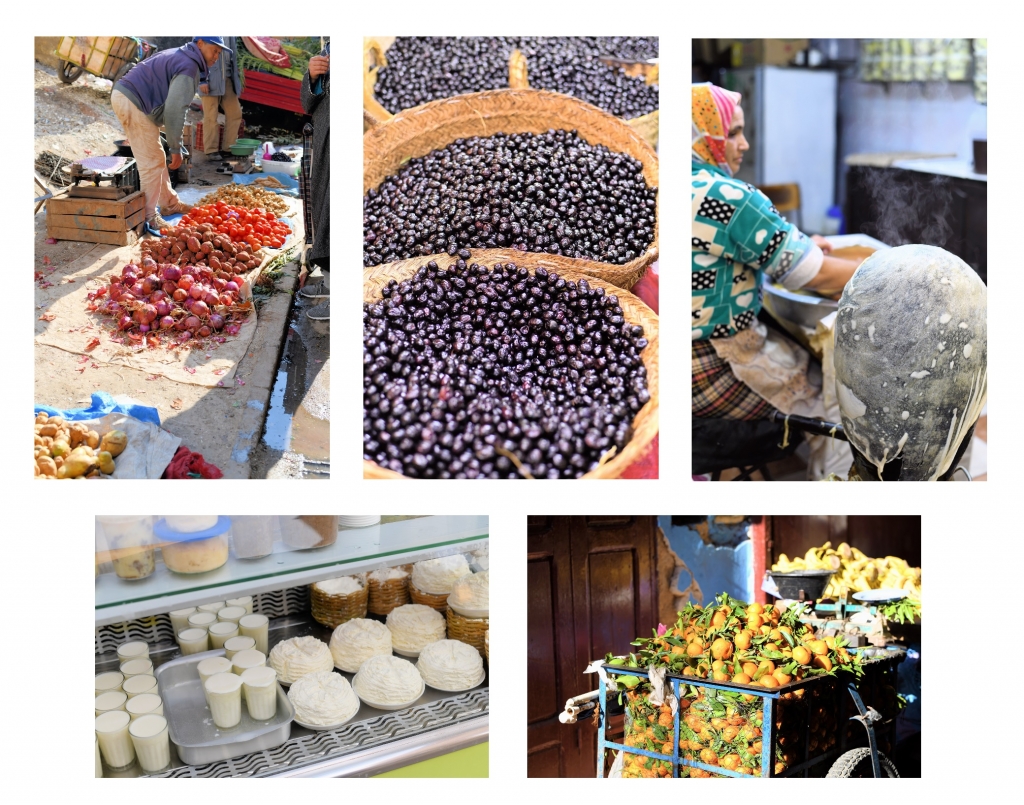 Fez-Sais airport is small but modern. Its magnificent architecture heralds the grandeur of the country in which it is located. The intimacy of the small buildings means that the arrival and passage through controls and gates is smooth and without unnecessary delays. Outside the airport, there is a taxi and bus stop. This is the first and last bastion of Europeanness in Fez.

After crossing the airport gates, get ready for a culture shock. 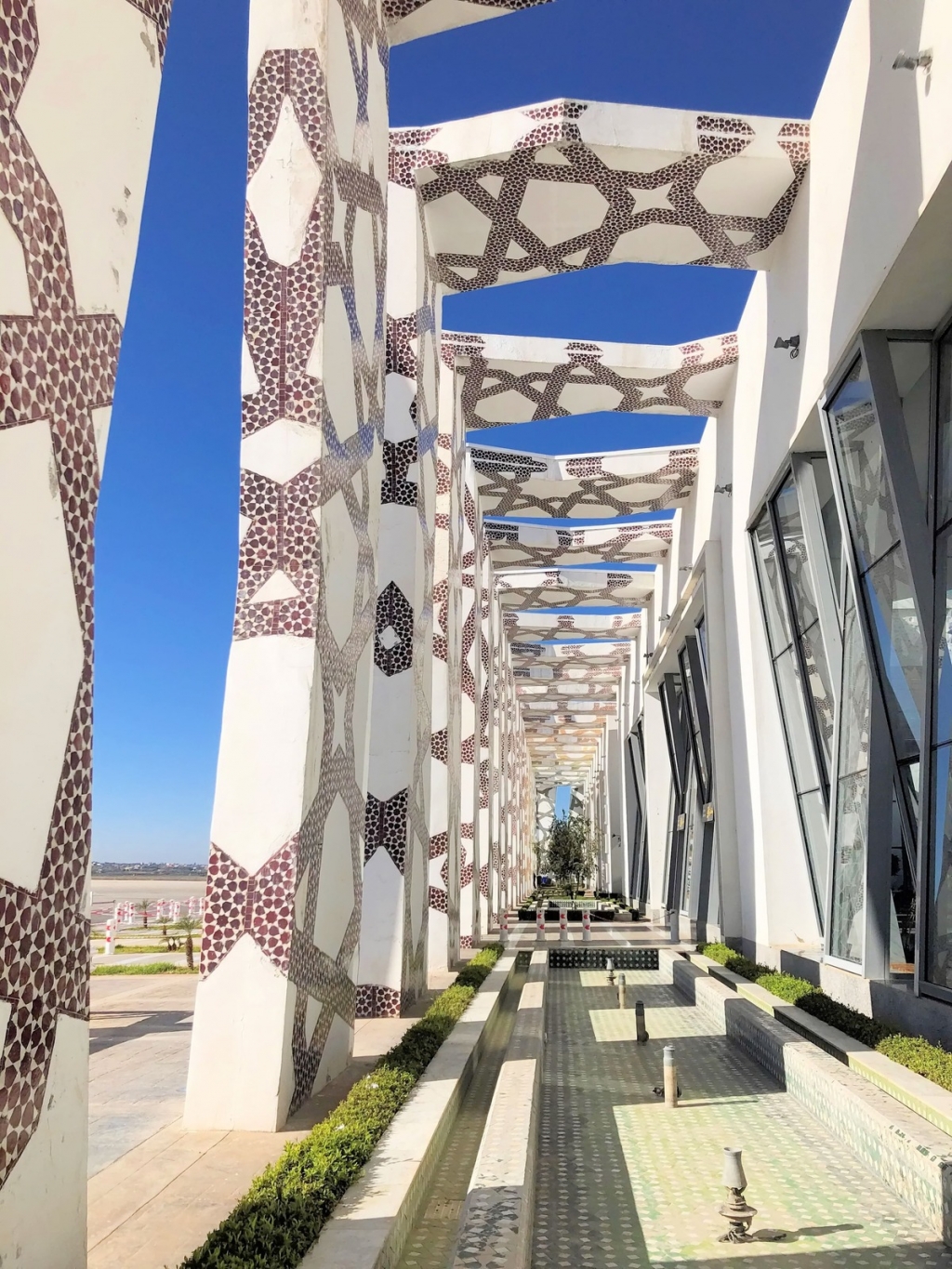 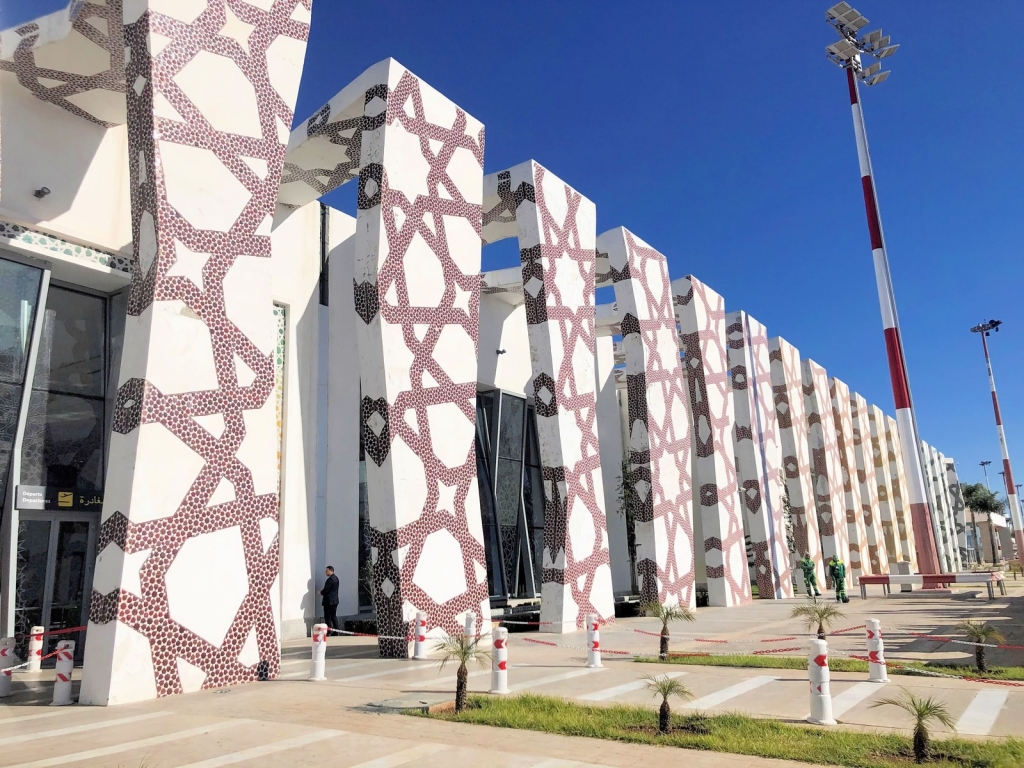