To see a bamboo forest, for the first time in my life, was a metaphysical experience for me.

It happened while travelling in China, and the story went like this….

Traveling outside the city of Huangshan (in the Chinese province of Anhui), heading towards the mountains bearing the same name, early in the morning, without coffee and with a sense of brutality because of getting up early, I was waking up every now and then from my nap, with the bounces granted by the bumpy road, our van was driving in. Opening my sleepy eyelids and looking casually, out of a hazy with my own breath window, I found a dramatic change in the scenery, from urban to mountainous. My disordered thoughts circled around the slopes of high hills, covered with peculiar vegetation. Why are these trees so strangely falling down? It was like they were about to break. I did not pay too much attention to the dilemma, considering the phenomenon simply as strange. After my arrival, I started the two-day climb to the peaks of the Yellow Mountains and forgot about the problem bothering me before. After descending from the mountains, with my emotional state of mind on the low side, driving the next day through the green areas of Wuyuan, I could not restrain myself anymore. I yelled to the driver: stop here immediately! Frightened by my violent reaction, the Chinese driver obeyed and stopped the car. Running out of the vehicle, I asked him where were we exactly, and what were those trees. With a half-smile, he told me, that this place is known for the most beautiful bamboo forests in the whole region. They were admired over the centuries and I was standing right in the heart, of this fabulous green temple. 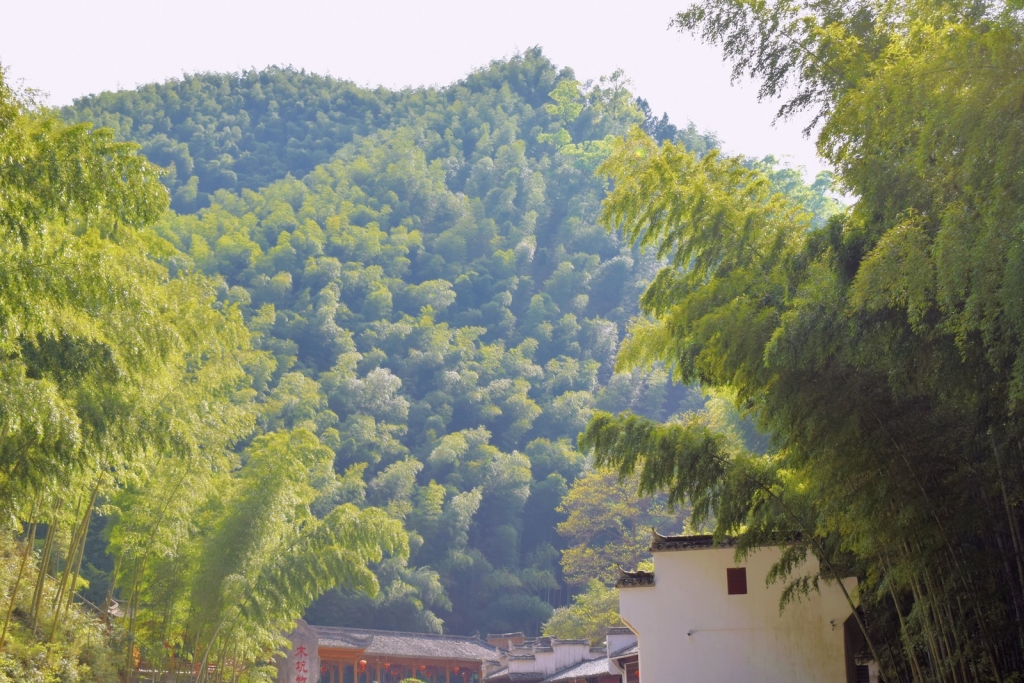 Everyone knows something about bamboo, but popular knowledge often does not include the surprising facts that characterize this wonderful plant.

It is not a tree but a kind of grass.

Some varieties grow very fast, up to 3.8 centimetrs per hour, which gives about a 90 cm increase per day. Therefore, it is the only plant on earth, that can keep up with the rate of the devastating deforestation policy, performed by mankind nowadays. Bamboo reaches maturity after 5 years and tall bamboo trees, with thick trunks, are formed after 40 years. Bamboo does not need any chemicals, pesticides or artificial fertilizers to grow well. When it is cut, new shoots are virtually immediately sprouted from its complex root system, thereby renewing itself indefinitely.

One of the most interesting features of bamboo is its antiseptic properties. Bamboo contains on its surface the Bamboo Kun, an antibacterial agent, the name given by the Japanese scientist, who discovered the substance. It counteracts the deposition and growth of 70 percent of bacteria, colonizing the surfaces of all objects known to us. This happens on naturally growing bamboo, as well as on the types grown by man.

The durability of bamboo is one of the most intriguing phenomena of mother nature. Its tensile strength is greater than that of steel. Due to this property, bamboo has been used for thousands of years as a building material “for everything”. It is used on a huge scale in construction, medicine, food production, textile industry, and many others. It can be said that its role in the economy of Asian countries, is priceless. 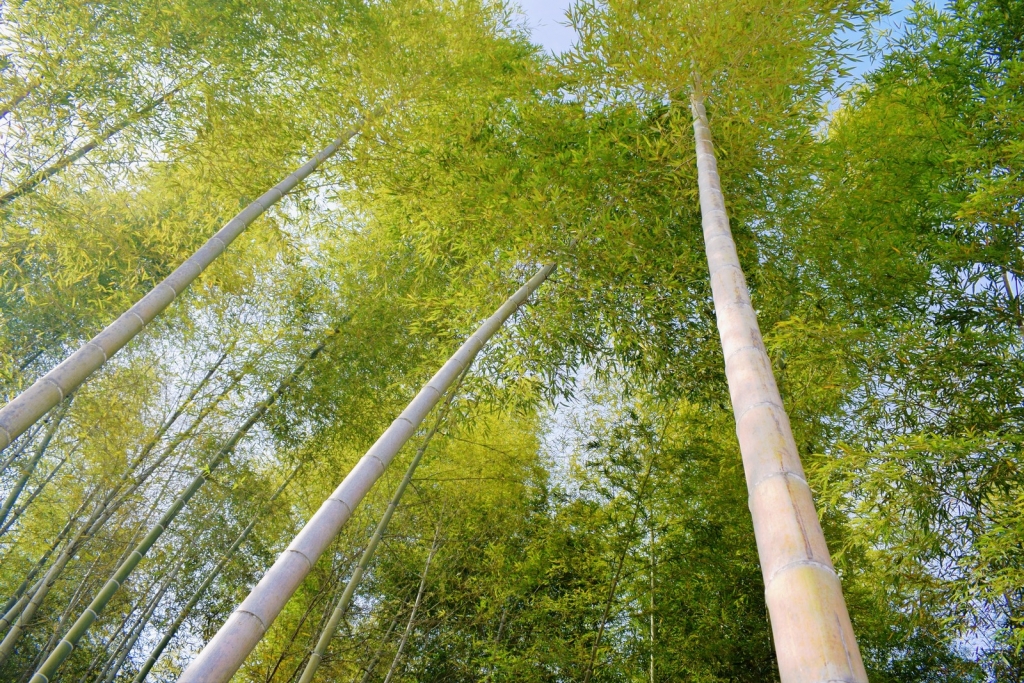 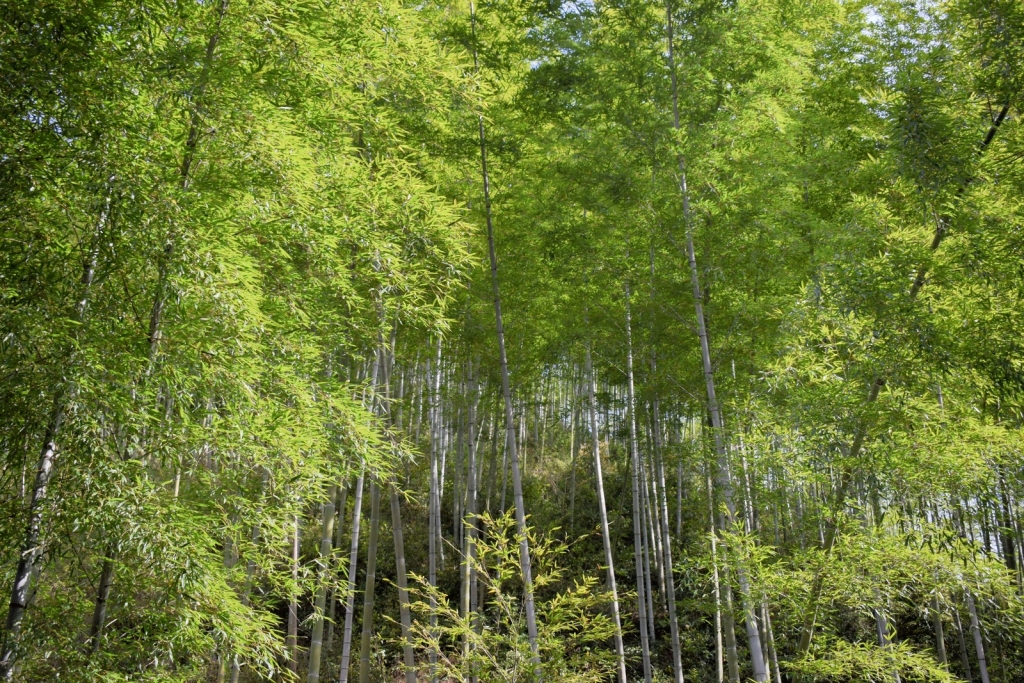 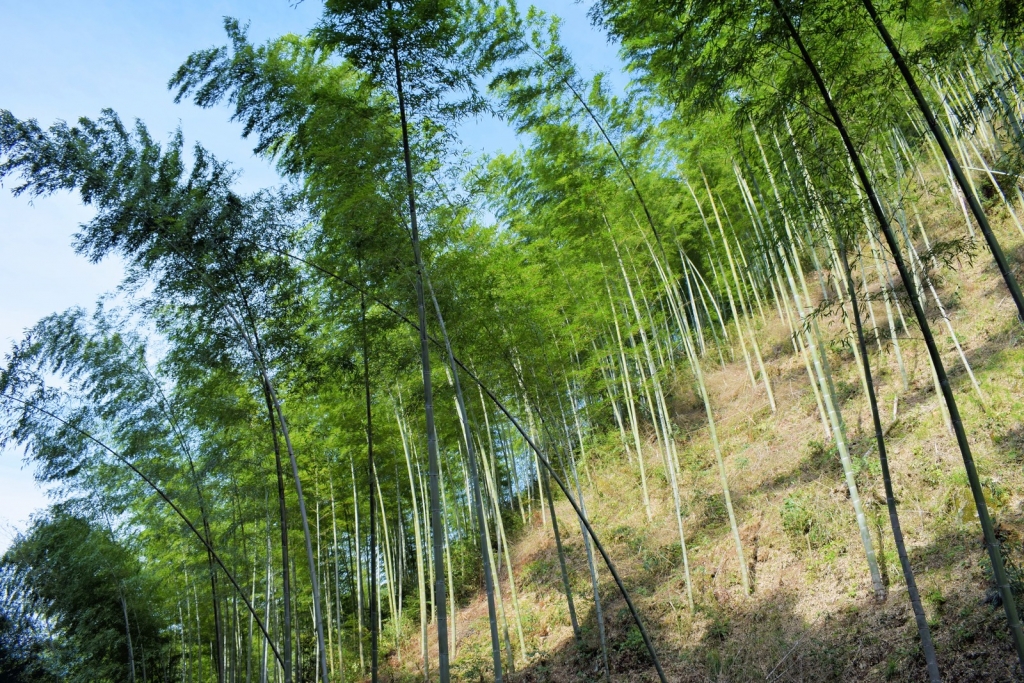 In Europe, individual bamboo branches can often be found as a decorative element in interior decor. Oriental gardens that are very popular, have bamboo in the form of small copses. But a Bamboo forest is something completely different. It is an entity that absorbs you inside and hypnotizes from the distance. The first striking element of a dozen meters high bamboo is that it bends, sometimes even to the ground itself, if it grows just on an inclined mountain slope. Its rich foliage crown gives it extra lightness. When hit by the wind, it seems to me that it is dancing, and from far away, the hills covered with bamboo, make me think of a plush toy or a fluffy fox tail. This forest is full of light compared to deciduous and coniferous forests. Slender and smooth bamboo trunks, give lightness to the structure, which is a monobloc of a thousand columns. It is a forest that draws you in, while its rustling creates music. Looking infinitely at this wonderful forest, for once I understood the panda bear. Since then I wanted to stay forever in these beautiful green areas, needing nothing more than bamboo and water. 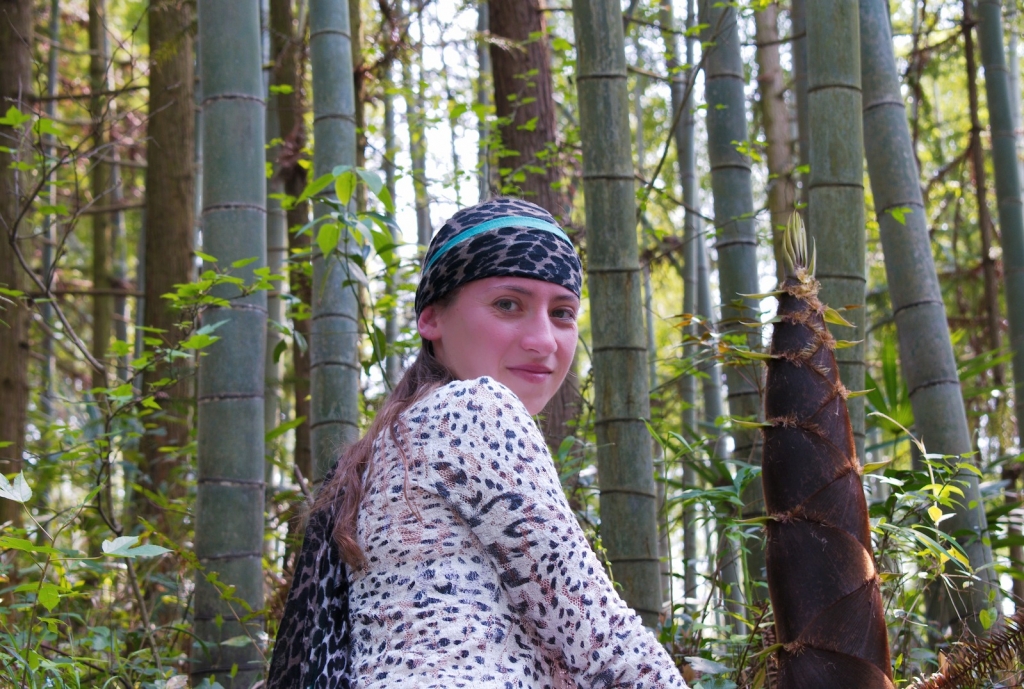 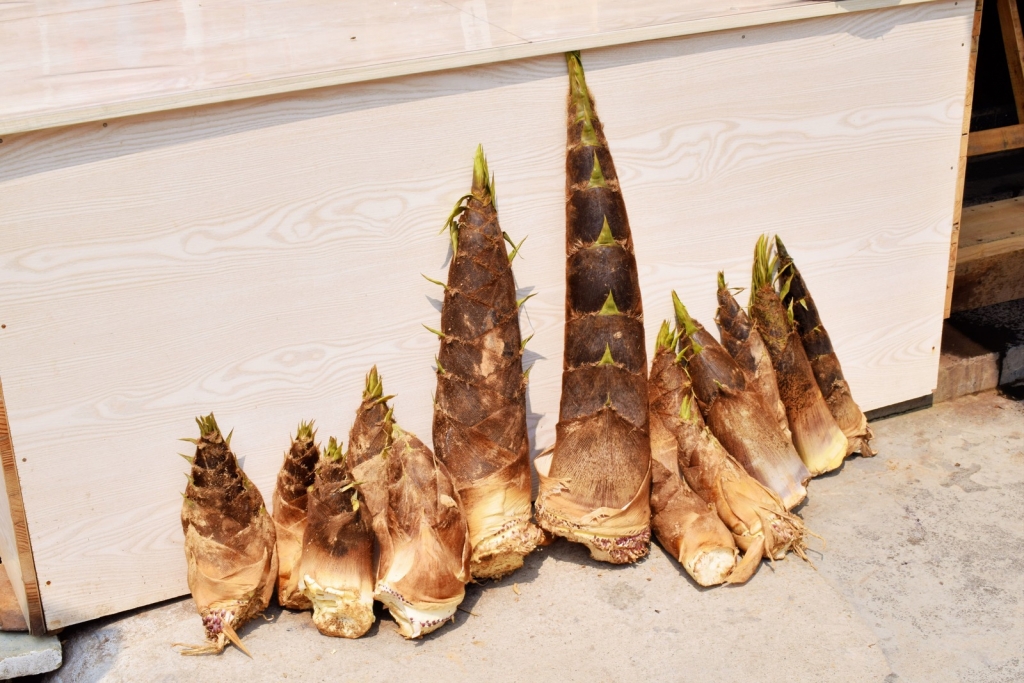 Visiting the small towns in the green land of Wuyuan, I discovered another fascinating element of bamboo-its young sprout, an early germinate. In every bamboo forest, you can see such shoots. They grow directly from the ground, in the form of a cone-shaped capsule, which systematically reminds me of eggs from the American movie franchise “Alien”. Some of them are cut and sold at nearby markets, being an important part of the Chinese diet. In order to eat it, the bamboo needs to be skilfully prepared beforehand, because its young shoots contain a cyanide toxin. According to Chinese medicine, regular eating of bamboo helps in the proper functioning of the immune system and fights obesity. Perhaps this is why during my travels in China I met with a lean, vibrant society, contrasting with the apathetic and often sick people of Europe or the Americas. I did not like bamboo very much, but in the Chinese diet, it seems to be a delicacy because it is added to many dishes. 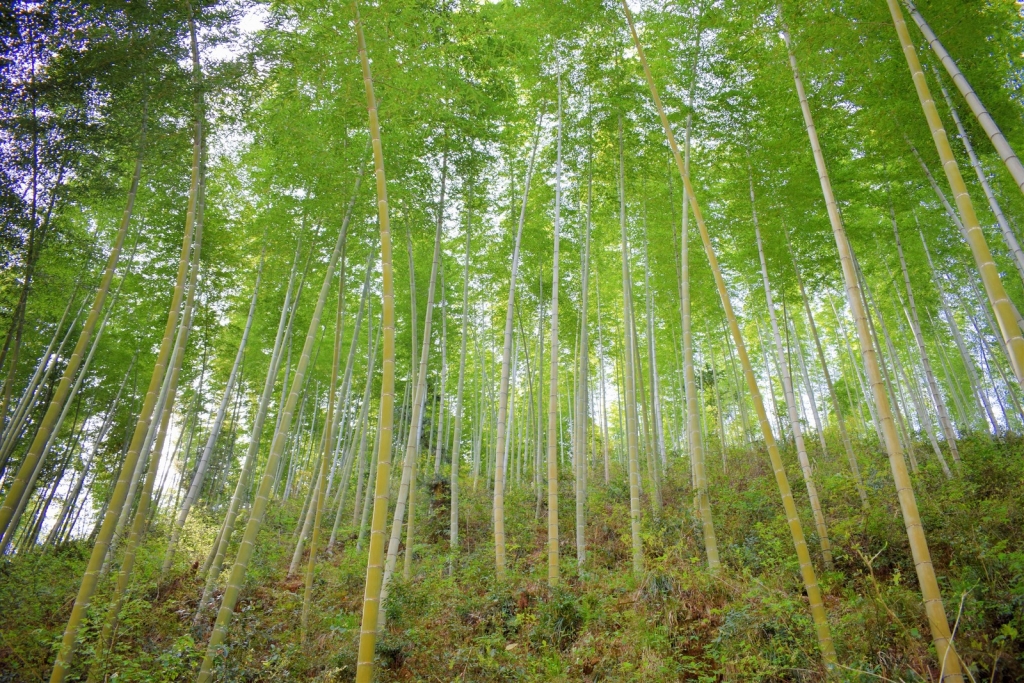 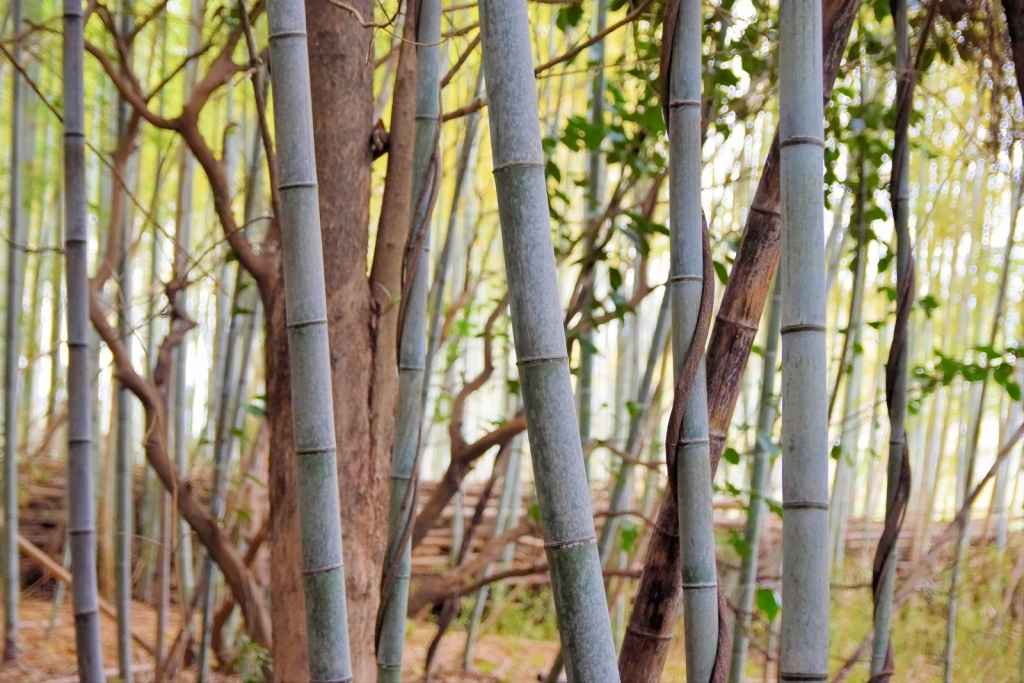 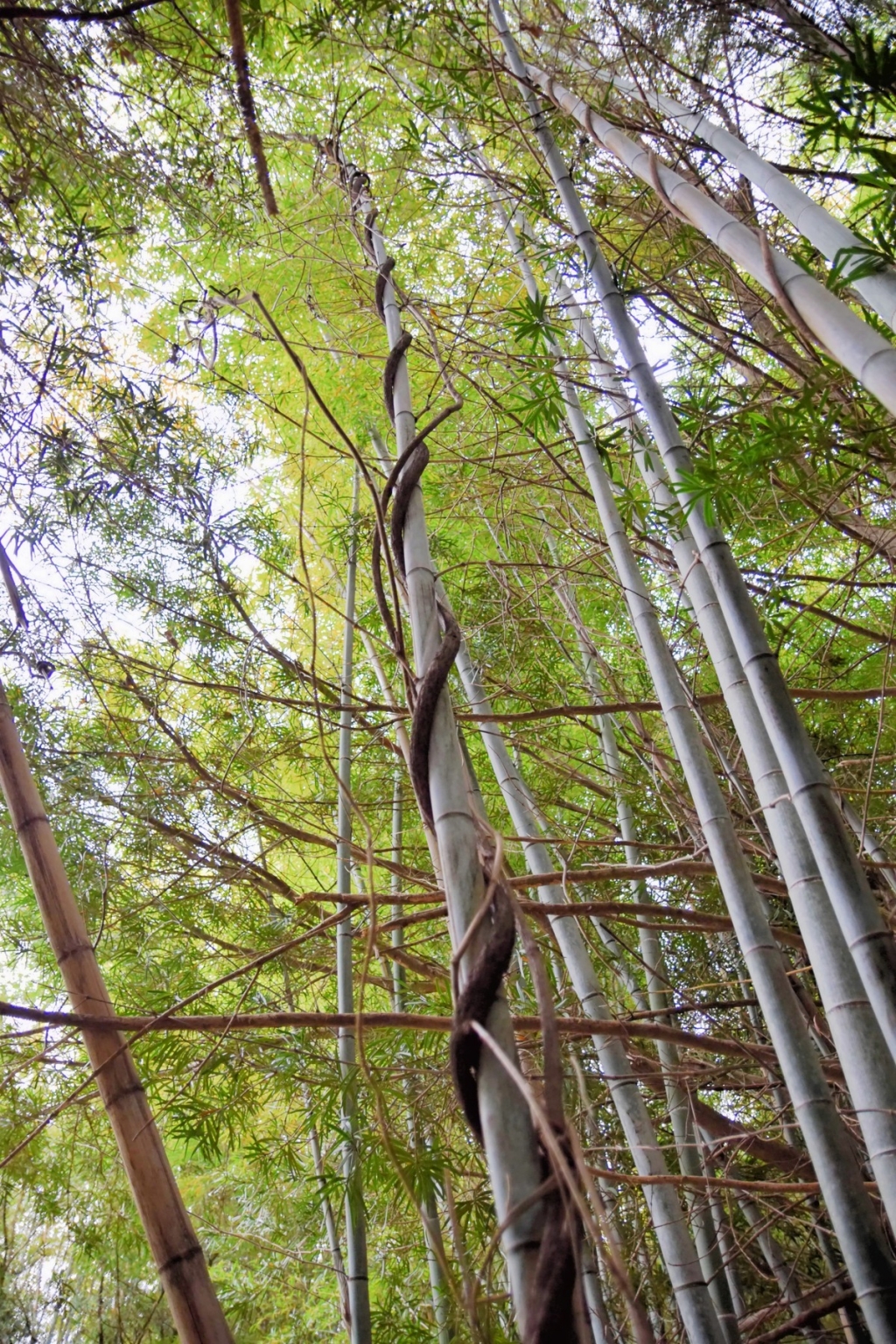 Bamboo is a characteristic plant of tropical and subtropical climates. It is a popular element of the landscape of East Asia, but it was only here in China, in the Anhui province, that it drew my attention in a special way. The vastness of space that bamboo forests occupy, in this green province next to Shanghai is unimaginable. It was only here that I understood what bamboo really is, and what a powerful gift it is to this part of the world.